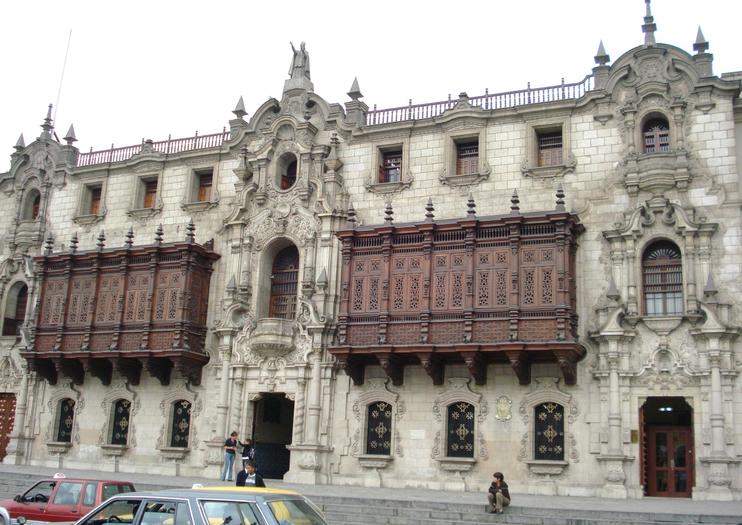 Located in Lima’s Plaza de Armas, the Archbishop’s Palace of Lima is an extraordinary example of neo-classical architecture. Rising next to the Lima Cathedral, this plot of land has been the Archbishop’s residence since Francisco Pizarro decreed it as such in 1535. The building, however, is relatively new, constructed in 1924 after the previous building, which had stood for years, was in dire need of repair. In addition to the soaring and intricately carved façade, there are spectacular carvings on the cedar balconies that hang above the front door.  On the palace interior, light filtering through stained glass windows falls softly on marble staircases that are lined with duel wooden balconies. With its regal—almost museum-like—quality, it’s hard to imagine that anyone is actually fortunate enough to live in the palace, which is still the home of Lima’s Archbishop and holds offices for the Cardinal of Peru. Guided tours of the palace are available for a deeper insight to the building, and it’s a captivating sight even from the exterior when exploring the Plaza de Armas.

The Archbishop’s Palace is open to visitors from 9am-5pm, Monday through Saturday. There is an admission fee of approximately $6 to enter the Palace, or a combination ticket of $10 for the palace as well as the Cathedral.
Address: Jirón Carabaya, Lima 15001, Peru
Admission: $6
Read MoreShow Less

6 Tours and Activities to Experience Archbishop’s Palace of Lima

6
Get a comprehensive overview of Lima on this half-day sightseeing tour. With a guide in the lead, visit local neighborhoods, the Archbishop's Palace, and the Pucllana Pyramid, among other highlights. Listen to guided commentary on the Peruvian capital's history and modern culture. Pickup and drop-off at select accommodations included.
…More
From
US$32.00
From
US$32.00

8
Feast your senses on Peru’s rich culinary culture on a full-day city tour and cookery class in Lima. Under the guidance an expert chef, create classic Peruvian dishes before sitting down to feast on the fruits of your labor. Then, embark on a comprehensive sightseeing tour of the city, visiting key attractions like the San Francisco Monastery and the Archbishops Palace. Gain valuable insight into the intriguing history of Lima from your expert guide and enjoy the convenience of hotel pickup and drop-off on this enriching tour.
…More
From
US$109.20
US$120.00
US$10.80 savings
From
US$109.20
US$120.00
US$10.80 savings
Face masks required for travelers in public areas
Face masks required for guides in public areas
Hand sanitizer available to travelers and staff
Learn More
Taking safety measures

10
Get the lay of the land in Lima thanks to this 4-hour private shore excursion sightseeing tour. Explore some of the city’s best-known landmarks including the Miraflores neighborhood, Huaca Pucllana, Government Palace, Plaza de Armas, San Francisco Convent, and much more.
…More
From
US$115.40
Price varies by group size
From
US$115.40
Price varies by group size
Face masks required for travelers in public areas
Face masks required for guides in public areas
Hand sanitizer available to travelers and staff
Learn More
Taking safety measures

1
See three sides of Lima, Peru—pre-Hispanic, colonial, and modern—in one full-day tour of the city. Visit what remains of pre-hispanic tombs and homes at the Huaca Pucllana archaeological site in the heart of the capital. Explore the architecture and buzz of modern neighborhoods including San Isidro and Miraflores as well as the historic Baranco area. After lunch, go even further back in time at the Pachamacac archaeological site.
…More
From
US$100.00
From
US$100.00

1
Explore the ‘City of Kings’ on a half-day walking tour of Lima. Listen to the history of the pre-Columbian, colonial, and present-day Lima from your informative guide. Visit the neighborhoods of San Isidro and Miraflores and admire the architecture of these areas. Learn about the history of Peru and how Lima became one of the gastronomical capitals of the world.
…More
From
US$50.00
From
US$50.00

1
Maximise your time in Lima with a private full-day sightseeing tour customised to your interests. Explore the vibrant neighborhoods of Miraflores and San Isidro; admire historic landmarks such as Plaza Mayor and the Convent of San Francisco; tuck into a traditional Peruvian lunch (included); and visits sights such as the Love Park, Huaca Pucllana, and the Larco Museum. Tour includes pickup and drop-off from your hotel or Callao Cruise Terminal.
…More
From
US$221.50
Price varies by group size
From
US$221.50
Price varies by group size
Face masks required for travelers in public areas
Face masks required for guides in public areas
Hand sanitizer available to travelers and staff
Learn More
Taking safety measures