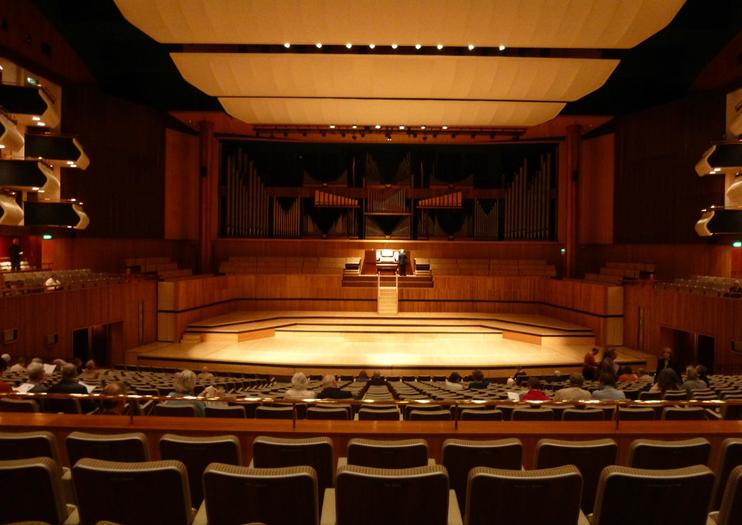 A highlight of London’s vibrant South Bank, the Royal Festival Hall has been a cultural powerhouse since its debut in 1951, and is considered one of the world’s leading performance venues. Housed in a Grade I–listed building overlooking the Thames, the 2,700-seat auditorium hosts a regular program of concerts and other events.
The Basics
Part of the Southbank Centre—the United Kingdom’s largest arts center, comprising multiple venues—the Royal Festival Hall was built during the Festival of Britain, and was the city’s first postwar building to be granted protected status. Home to the London Philharmonic Orchestra, the venue also attracts world-renowned musicians and other performers to its stage.
Given its pride of place on the South Bank, you’ll likely glimpse the Royal Festival when sightseeing in London, whether you’re on a hop-on hop-off bus tour, a Thames river cruise, or a private driving tour. It’s also easy to book tickets to a show and go on your own.
Things to Know Before You Go
How to Get There
It’s convenient to get to the Royal Festival by metro: take the Northern, Bakerloo, Jubilee, or Waterloo & City line to Waterloo station, or the District or Circle line to Embankment station. The venue is also served by numerous bus lines, riverboats, taxis, and rideshares.
When to Get There
Though the Royal Festival Hall is open daily, performance times vary. The venue is particularly lively during the South Bank’s annual festivals, including the Underbelly Festival (spring and summer), Meltdown (August), and the London Jazz Festival (October).
What Else to Do in the South Bank
The South Bank is one of London’s top destinations for culture and entertainment. Check out local food trucks and vendors in the outdoor Southbank Centre Food Market, explore the SEA LIFE® London Aquarium, or take a ride on the London Eye.
Address: Southbank Centre, Belvedere Rd, London, United Kingdom, England
Read MoreShow Less

161
Glide by some of London’s must-see landmarks on a sightseeing cruise from Westminster to Greenwich on the Thames River. Step aboard your comfortable cruise boat at Westminster Pier and listen to the entertaining live commentary as you pass sights such as Shakespeare’s Globe, Tower Bridge, and the Tower of London. Drink in the views from the open or indoor deck, and at Greenwich, step ashore to visit attractions (own expense) such as the Cutty Sark or National Maritime Museum. Upgrade to include a return cruise back to Westminster.
...  More
From
US$17.97
From
US$17.97
Learn More

50
Cruise from Westminster to St Katharine's on a 1-hour circle cruise in London. Choose to disembark at any of the stops, including St Katharine's Pier, Bankside Pier, Festival Pier and Embankment Pier, to visit the landmarks in central London. While on the boat, listen to live audio commentary by your captain about the sights you pass and London's rich history. Departures every 30 minutes from Westminster Pier between 11am and 6pm.
...  More
From
US$13.68
From
US$13.68
Learn More

Experience the magic of London after dark on a private 3-hour sightseeing tour custom-made for you! Drive through the illuminated city, stopping to marvel at Tower Bridge, the London Eye and Piccadilly Circus. Along the way, hop out to stroll around Trafalgar Square, soak up the electric atmosphere of the West End, Chinatown and Soho or admire the views along the River Thames.
...  More
From
US$328.18
per group
From
US$328.18
per group
Learn More

2
Capture the infectious energy of London’s South Bank on this 4-hour photography walking tour. Your professional photographer guide will show you how to adjust aperture, shutter speed and depth of field to snap candid portraits of the street entertainers and market vendors that line the River Thames. With tour places limited to six, you’ll enjoy one-on-one tuition to help you achieve winning shots of landmarks like the London Eye, Big Ben and St Paul's Cathedral.
...  More
From
US$182.32
Price varies by group size
From
US$182.32
Price varies by group size
Learn More

CHOOSING THE SOUTH TOUR WILL PROVIDE A CAPTIVATING EXPERIENCE. ONCE WE LEAVE THE HUB YOU ARE INSTANTLY TRAVELING THROUGH WHITEHALL WHERE YOU GET TO SEE THE QUEEN’S GUARD, 10 DOWNING STREET AND MUCH MORE BEFORE THE STUNNING BIG BEN, HOUSE OF PARLIAMENT AND WESTMINSTER ABBEY APPEAR ON THE HORIZON. YOU WILL GET THE OPPORTUNITY TO DELVE INTO SOUTHBANK WHERE YOU GET FAMILIAR WITH ROYAL NATIONAL THEATRE, TATE MODERN, SHAKESPEARE GLOBE, THE FAMOUS BOROUGH MARKET AND OF COURSE THE SHARD BEFORE DRIVING OVER TOWER BRIDGE AND THROUGH UPPER THAMES STREET WHERE YOU WITNESS THE BEAUTIFUL VIEW OF THE RIVER THAMES AND THE SOUTHBANK. FINALLY, WE WILL REACH TRAFALGAR SQUARE THROUGH NORTHUMBERLAND AVENUE. FURTHERMORE, BY TAKING SOUTH TOUR, YOU WILL OBSERVE SITES SUCH AS TATE BRITAIN, LAMBETH PALACE, MI5 BUILDINGS AND MUCH MORE.
...  More
From
US$218.79
per group
From
US$218.79
per group
Learn More

21
Enjoy a double dose of London sightseeing with this combined ticket for Madame Tussauds and a Thames River cruise, all for a money-saving price. With your prebooked ticket, enjoy faster entry to Madame Tussauds to see its 300 stunning wax figures independently. Meet Britain’s royals; cozy up with George Clooney and Benedict Cumberbatch; and get close to A-listers, Bollywood and sports stars. On the same day, step aboard a sightseeing boat and enjoy stellar views of landmarks such as Big Ben and Tower Bridge as you cruise on the Thames.
...  More
From
US$74.86
From
US$74.86
Learn More

Have you ever stopped to think about a simple question and found the answer to be much more complex than you ever could have imagined? And that that answer leads to yet more questions? This was precisely Rachel Erickson's situation when she moved to London. She was a drama student, a tourist, and a person who needed to do what we all must and use a toilet. But the toilet door was barred by a 30p entry charge. Avoiding this, she began to learn the workarounds and secret free toilets in London. One day she started to wonder about the politics of paying to pee. Where does the money go? Why is it free in some places and not others? Should it be a human right? New avenues opened up and she found herself plunged into a whole new world. She became the Loo Lady and toilets became her life. Today she's going to take you on a journey into the surprisingly dynamic world of the British Public Toilet. This tour takes you past some of London's most iconic views with a new twist.
...  More
From
US$6.65
From
US$6.65
Learn More

Join an exceptionally scenic photography workshop which fuels your passion for photography as you unlock the power of your camera to discover great shots. Learn how to get the best holiday photos which show off your wonderful adventures perfectly. This is an outstanding photography learning experience as you explore and photograph the cultural heart of London with professional Fine Art Photographer, Lou Smith. Your expert photographer has extensive teaching experience and knows a multitude of cameras. Photograph the vibrant and buzzing nature of London's South Bank where teaching is geared towards you and the camera you own. Capture street entertainers, musicians, market stalls, iconic architecture and outstanding river views. Learn About; * Composition and framing * Aperture and depth of field * Shutter speed to freeze action and create motion * Lens choices and zoom selection * Light and how it affects your photos * Get the best from the camera you own * And much more...
...  More
From
US$226.25
Price varies by group size
From
US$226.25
Price varies by group size
Learn More

1
Combine a 4-hour walking tour along London’s atmospheric South Bank with an expert-led photography class tailored to your interests and knowledge level. Pass iconic landmarks like Big Ben, the London Eye and Westminster Bridge, set against a photogenic backdrop of the Thames River. Your private guide will show you how to get the best possible shots with your camera and point out little-known viewpoints to make your photos unique and memorable.
...  More
From
US$233.37
Price varies by group size
From
US$233.37
Price varies by group size
Learn More

Things to do near London