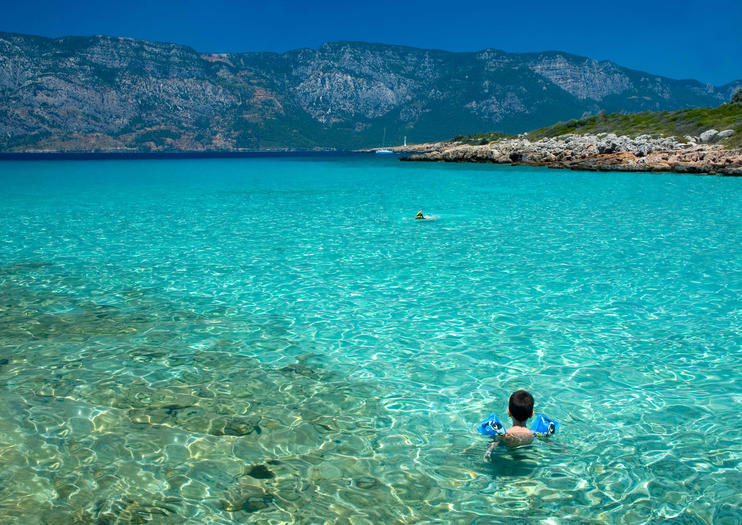 Sedir Island is best known as Cleopatra Island, named after the pharaoh who allegedly met her lover Marc Antony on its shores. Forever romanticized by its connection with the iconic lovers, this small island in the Gulf of Gökova is now a popular stop on boat cruises and jeep safaris from Marmaris.
Cleopatra Island’s second claim to fame is its unusually textured sands, made up of smooth white, ground seashells. To preserve this one-of-a-kind sand, visitors are required to leave their belongings and shoes at the entrance to the beach. Removing the sand is strictly prohibited. Typically, such sand can only be found on Egyptian shores, fueling the legend that Marc Antony had it shipped in to Sedir Island from North Africa in an attempt to woo his mistress.
The island also has an additional sandy beach, popular among swimmers and sunbathers, that is home to a number of Roman ruins, including an agora and an amphitheater that dates back to the fourth century B.C.

Cleopatra Island is reachable only by boat. It is located off Turkey’s southwestern coast, about 25 kilometers from Marmaris.
Address: Marmaris, Turkey
Read MoreShow Less

5
Enjoy a day of guaranteed fun in the sun during this adventure-filled, all-inclusive getaway from Marmaris. Hop on a red convertible bus for a scenic journey through the Turkish countryside before transferring to a boat cruise, with on-site amenities like karaoke and a foam party. Enjoy an onboard lunch before taking a dip in no less than three unforgettable swimming spots, from the Blue Lagoon to Cleopatra Island.
...  More
From
US$34.97
From
US$34.97
Learn More

3
Explore the sandy beaches, pine-covered headlands and sun-kissed islands of the Gulf of Gökova on this scenic 7-night cruise, including meals and accommodation on-board. Set sail from Bodrum on a traditional wooden ‘gulet’ and hop off to take in the sights of Bodrum, explore the ancient city of Kaunos (optional) or marvel over natural wonders like the white-shell beach of Sedir Island (Cleopatra’s Island). They’ll also be plenty of opportunities for swimming and sunbathing as you discover little-known spots like the Seven Islands archipelago, Tuzla Bay and Orak Island.
...  More
From
US$327.12
From
US$327.12
Learn More

7
Channel the languorous life of Cleopatra on this cruise to Cleopatra Island, departing from Marmaris. Sail the emerald Gulf of Gökova, admiring stunning vistas and indulging in swimming dips during stops along the way. Savor a lunch onboard the boat, then port at the island’s shores where the Egyptian queen famously vacationed with Mark Anthony. Enjoy the island itself as you wish — stroll, swim, sunbathe or explore the ancient ruins before returning to Marmaris, with one final swim stop on the way back. No trip to the Turkish coast is complete without this experience.
...  More
From
US$34.97
From
US$34.97
Learn More
Reserve Now & Pay Later
We'll reserve your spot today, and you can cancel up to two days before your experience without making a payment. Secure your spot with ease, stay flexible, and never miss out.
How it works
Find your experience
Choose the experience you want knowing you can secure your spot without being locked in.
Make a reservation
Reserve now and pay later to secure your spot, commitment-free.
Choose when to pay
Come back to pay once your plans are set, or let auto-pay kick in two days before your experience.
Enjoy your experience
Now you're all set! Have a great time.
Frequently Asked Questions  | Terms & Conditions
Reserve Now & Pay Later
Secure your must-do activities without being locked in
Learn More

Spend a day exploring the Turkish Riviera’s stunning scenery on this adventurous tour. Following pickup from your Marmaris hotel and a safety briefing, hop in your Jeep and go for an off-road tour through the region’s hills and forests, enjoying panoramic views as you go. Next, transfer to a boat and journey to Incekum Bay, where you can dine on board and swim. Continue to Cleopatra Island—so named because the Egyptian Queen was said to spend time here—for further sunbathing and paddling before returning to your hotel.
...  More
From
US$40.61
From
US$40.61
Learn More

This full-day excursion to Cleopatra Island offers departures from hotels in both Marmaris and Icmeler. On the way to the island you’ll stop for swimming breaks in Incekum Bay and near Fenerli Island.Enjoy the warm turquoise waters and stunning views of Gokova Bay. A delicious BBQ lunch will be served back on board, and includes chicken or meat balls, spaghetti, salad, and seasonal fruits.With 3 hours or more of free time on Cleopatra Island, you’ll be able relax on the white sand beach, take a leisurely walk through the olive groves, and explore the ruins of the Roman amphitheater and fortifications.The island’s sands are legendary and are believed to have been imported by Mark Anthony as a gift to his lover Cleopatra. This unique sand cannot be found anywhere else in the world: the grains are so tiny and shiny that the beach on Cleopatra Island was declared a National Conservation Area. It is not permitted to take any sand with you when leaving the island.
...  More
From
US$62.04
From
US$62.04
Learn More

3
Sail along Turkey’s sun-kissed Turquoise Coast in style on this 7-night luxury yacht cruise from Bodrum, including meals and accommodation on-board. Escape the crowds as you cruise around the beaches and bays, stopping off to swim or hike along the way. Enjoy free time for sightseeing in Bodrum, explore the Byzantine ruins at Kisebuku, or just relax on deck and soak up the scenery.
...  More
From
US$394.00
From
US$394.00
Learn More

1
Cabin Charter is a great way to enjoy the beautiful wonders of the Turkish Coast line and the Greek Islands. You may choose to enjoy the cruise on your own, with friends or family and the number of cabins is up to you. You don’t have to get a large a group together to rent a private yacht for a yachting holiday. You have the opportunity to enjoy a “Blue Voyage” together with a group of sea-lovers from all around the globe. It is a wonderful way to meet new friends from all different countries and cultures.
...  More
From
US$535.79
From
US$535.79
Learn More