Where to Find the Best Views in New York City 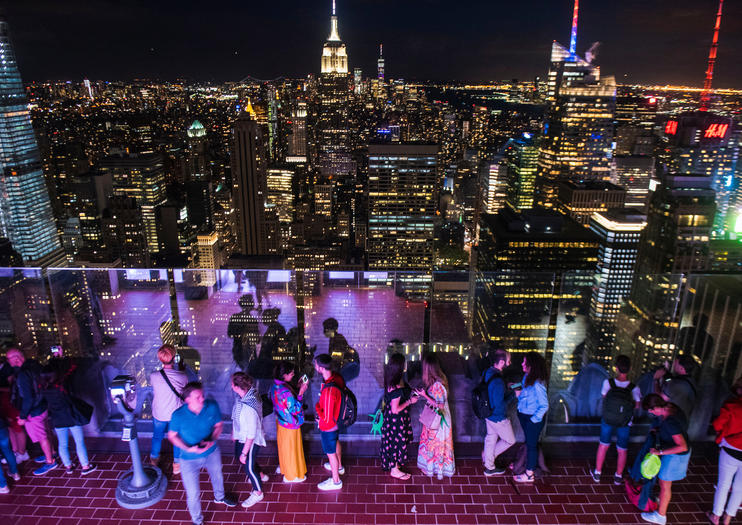 With some of the world’s most iconic skyscrapers and plenty to see, New York City’s top viewpoints are worth finding. Whether by air, aboard a boat, or from atop a high-rise, here are some of the best spots to take in the beauty of the Big Apple.
Empire State Building
One of America's most iconic skyscrapers, the Empire State Building offers 360-degree views from its 86th-floor observatory. Climb to the top to visit its two indoor/outdoor decks, from which you can see Central Park, the Chrysler Building, the Statue of Liberty, and Times Square. Don't miss the Art Deco lobby at street level or the chance to admire the building itself—some tours offer access at sunrise for beautiful lighting or dinnertime for a meal.
One World Observatory
While in New York City, you have to catch the views from One World Observatory at One World Trade Center, the Western Hemisphere's tallest building. A Sky Pod zips travelers up to the 102nd floor for views of up to 50 miles away in each direction on a clear day. Pre-book your tickets for priority admission and a direct elevator to the observatory.
Top of the Rock
From the Top of the Rock's three floors of indoor/outdoor viewing areas, it's possible to see the iconic the iconic Freedom Tower, the Empire State Building, the Chrysler Building, and the Brooklyn Bridge. You can also take a 75-minute Rockefeller Center tour to learn about the building.
Helicopter Tours
There's no better way to get a bird's-eye view of New York City than by flying over it. On a 15-minute helicopter tour, you'll catch views of the Statue of Liberty, Ellis Island, Central Park, the west side of Manhattan, and more.
Hudson River Cruises
Pass by Manhattan and the Statue of Liberty on a three-level boat on a Hudson River cruise. Daytime sightseeing cruises offer crisp views of the city, while dinner cruises typically include a three-course meal and plenty of time to take in the city skyline at dusk and by night. Ferry tours to the Statue of Liberty also feature great NYC views from the water.
Read MoreShow Less
New York City Tours & Activities (7)
Filter
•

3022
Marvel at the 360-degree, unobstructed views from the Empire State Building and explore its Interactive Museum and more with this combo ticket. See NYC's landmarks from the 86th-floor observatory, enjoy the exhibitions and augmented reality viewfinders on the 80th floor; and explore the 2nd-floor museum’s immersive displays on the building's history. Upgrade for skip-the-line access, and once on site, choose to upgrade to add a visit to the 102nd-floor observatory.
...  More
From
US$45.73
From
US$45.73
Learn More

1094
See New York City at your feet with admission to the One World Observatory, a 3-story destination on top of the western hemisphere’s tallest building. Ride to the 102nd floor and watch the virtual city skyline transform across centuries of history. Learn about the construction of the skyscraper, which has sweeping views across the city, enjoying New York from a whole new perspective. Or choose from two upgrade options with benefits like skip-the-line security entrance and flexible admission.
...  More
From
US$41.37
From
US$41.37
Learn More

2011
Get the best view in all of New York City from the Top of the Rock Observation Deck at Rockefeller Plaza. Soak up three floors of indoor and outdoor viewing areas and admire the Big Apple’s popular landmarks, such as One World Trade Center, the Empire State Building, the Chrysler Building, the Brooklyn Bridge, the Statue of Liberty and more.
...  More
From
US$41.37
From
US$41.37
Learn More

1021
Discover three of New York City's most memorable sites on this Viator Exclusive tour, available nowhere else. Hear the history of Wall Street on a guided walking tour, then visit the 9/11 Memorial to learn about one of the most significant events in NYC history. Finally, ride the ferry to Liberty Island and enjoy an audio tour of the Statue of Liberty and its museum.
...  More
From
US$49.00
From
US$49.00
Learn More

137
Take your New York City nightlife experience to new heights during this evening excursion to some of the city’s best rooftop bars and lounges. Check out Big Apple hotspots like Hudson Terrace, Sky Room, and Paramount Hotel, following your insider host to three venues to dance, mingle, and enjoy the trip’s included drinks (venue's choice). It’s a great way to hang out with the locals in a fun atmosphere while enjoying incredible New York skyline views. Your rooftop nightlife trip also includes cover charges, three drinks, and transport between venues. Minimum age is 21 yrs due to licensing regulations. ID required. Dress code must be followed.
...  More
From
US$75.00
From
US$75.00
Learn More

486
As day turns to night, it's easy to see how New York City earned its City That Never Sleeps moniker. See the Big Apple in the light and dark with a day and night admission ticket to the 86th-floor observation deck at the Empire State Building—the highest observatory in New York City. Beat the lines by arriving with your daytime ticket, valid between 8am and 8:59pm, for 360-degree views of the iconic Manhattan Skyline and the Statue of Liberty. Then, return between 9pm and 2am for spectacular views of New York by night.
...  More
From
US$66.41
From
US$66.41
Learn More

15
Wake up with the City that Never Sleeps on a trip to the Observation Deck of the Empire State Building at sunrise, before the building is open to the public. Jumpstart your day with 360-degree panoramic views of the sunrise illuminating New York City below on an experience limited to 100 people.
...  More
From
US$125.00
From
US$125.00
Learn More