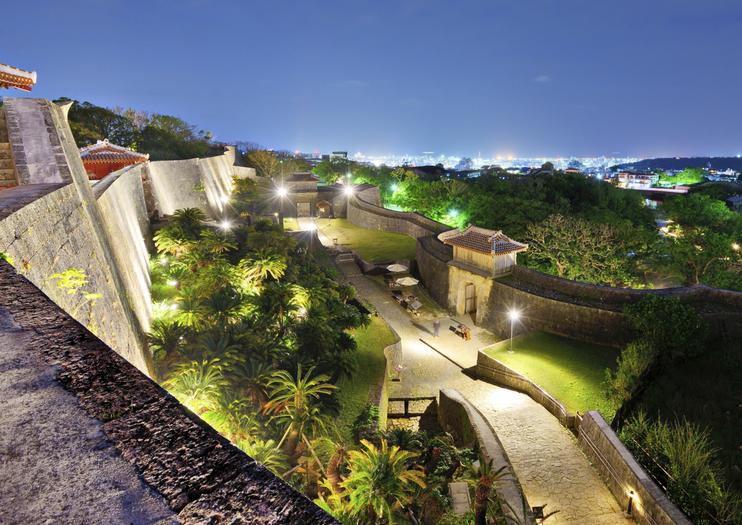 In 1970 more than 5,000 Okinawans retaliated against years of military occupation in what eventually became known as the Koza riot. Four years later, on April 1, the city recovered its independence and embarked on the path to becoming one of the island’s top destinations for both locals and travelers.
Steeped in history, culture, politics and tradition, the streets of Okinawa City (Okinawa-shi) are alive with an electricity and energy that’s practically unmatched. Large shopping centers, international military bases and world-class botanical gardens all exist side-by-side and offer a testament to the diversity of this city’s past and future. Nearby Shuri Castle, popular Daiichi Makishi Public Market and dozens of live karaoke joints make Okinawa a hub of entertainment and history for travelers that’s worth spending a day—maybe even more—exploring.

Okinawa City is located about 20 kilometers north of Naha. It is the second largest city in Okinawa Prefecture. The city is easy to navigate by bus or on foot.
Address: Okinawa City, Japan
Read MoreShow Less
Admission Tickets (1)

10
See animals that once roamed free in Japan, from Tanegashima Island to Yonaguni Island, at the Okinawa Zoo and Museum. This admission ticket gives you all-day access to view many types of animals on exhibit. Observe big cats, elephants, giraffes, and hippos in the enclosures where they are kept. It’s a popular and family-friendly animal park for Okinawa locals and visitors alike.
...  More
From
US$3.81
From
US$3.81
Check Availability
Check Availability

10
See animals that once roamed free in Japan, from Tanegashima Island to Yonaguni Island, at the Okinawa Zoo and Museum. This admission ticket gives you all-day access to view many types of animals on exhibit. Observe big cats, elephants, giraffes, and hippos in the enclosures where they are kept. It’s a popular and family-friendly animal park for Okinawa locals and visitors alike.
...  More
From
US$3.81
From
US$3.81
Learn More

Localgrapher is the largest network of professional photographers and videographers with more than 600 destinations around the globe! Book your private photographer and guide in Okinawa to capture your picture-perfect moments while visiting amazing sites! SOLO TRAVELERS Fancy an insta-perfect photoshoot from your Okinawa vacation? Localgrapher has years of experience with fashion and solo travel photography! Make your memories last a lifetime and share them on social media or display them in your home to receive an avalanche of compliments. COUPLES If you are about to propose to your loved one, honeymooning or just exploring what Okinawa has to offer, put the selfie stick aside and let Localgrapher’s superb photographers take care of the photos for you both. FAMILIES & GROUPS A family trip, wedding, bachelorette party or grand get-together? Forget missing someone from pictures, we’ll capture them all!
...  More
From
US$257.90
per group
From
US$257.90
per group
Learn More

Private Photo Session with a Local Photographer in Okinawa

Want to capture your amazing honeymoon? Family vacation while the kids are still little? Your perfect couples retreat from everyday busy life? A solo trip without asking strangers to take pictures of you? Stop searching, we got you here! We are the largest network of local vacation photographers in the world! Besides Okinawa, we operate in over 700 destinations worldwide! We always make sure that every special moment of each client is captured well. We believe in our service and quality of our photos so much that we even offer a 100% money back satisfaction guarantee for your photo shoot. Which means, if you don’t like the result of your photo shoot, you can contact us within 7 days and claim your money back! So what are you waiting for? Become one of our hundreds of happy customers by treating yourself to this special experience! Your family and friends will love the result too!
...  More
From
US$257.90
per group
From
US$257.90
per group
Learn More

Things to do near Okinawa