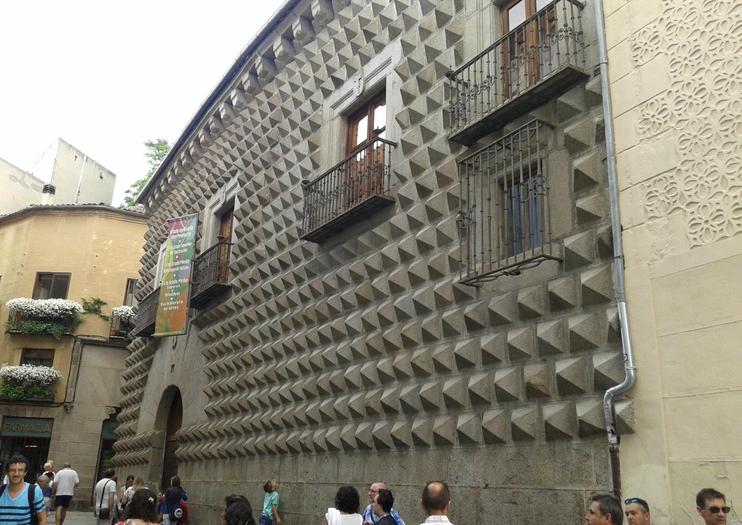 On your journey from Segovia’s Roman aqueduct to its Plaza Mayor, you’ll no doubt pass by one of the city’s most intriguing buildings, the Casa de los Picos. One look at the façade and you’ll easily see how it earned its name, the (loosely translated) House of Sharp Points, as its front is covered top to bottom with over 600 granite, diamond-shaped reliefs.
It is believed that the 15th century noble home’s curious façade was created as a possible form of defense given the building’s rather exposed location. Legend has it, though, that the house was well known (famously or infamously) for its previous owners, so when new ones moved in, they chose to cover the façade. These days, the thick-walled structure is home to the Segovia Art School and serves as an exhibition hall, which is open to the public free of charge.

Spend the day exploring Segovia on this private trip from Madrid. Check out the top attractions and learn about the Roman aqueduct, royal palace and more from your friendly, professional guide. Customize this trip to meet your time constraints and interests, and ensure that you leave having seen the best of these two destinations!
...  More
From
US$350.34
Price varies by group size
From
US$350.34
Price varies by group size
Learn More

Exploring Segovia without a guide may leave you just skating over its UNESCO-listed attractions. Get the most from the city on this private tour from Madrid, with a personal guide to provide full lowdowns on the sights so you don't have to rely on phones and guidebooks. Plus, tailor your sightseeing around you; perhaps viewing less-visited sights alongside must-sees like the Roman Aqueduct. Door-to-door transport from Madrid makes everything extra-easy.
...  More
From
US$326.18
Price varies by group size
From
US$326.18
Price varies by group size
Learn More

During this walking tour, you will get to see some of the most popular tourist attractions of Segovia along with a local- professional guide who will be exclusively with you. The walking tour can be customized according to your taste and preferences. The tour timings are flexible and can be amended depending upon availability. In case of any special request, please do let us know and we would try our best to accommodate accordingly.
...  More
From
US$312.89
per group
From
US$312.89
per group
Learn More

Guided Walking Tour of the Cultural Heritage of Segovia

It is essential to know this city with this World Heritage route through the historic center. They will be able to know the city in all its facets: history, art, legends, customs and with free tasting of local products. You will be able to verify that this route is only the beginning to know the city, since Segovia is much more and you will want to visit more monuments, museums, restaurants and return!
...  More
From
US$9.66
US$12.08
US$2.42 savings
From
US$9.66
US$12.08
US$2.42 savings
Learn More

Things to do near Segovia