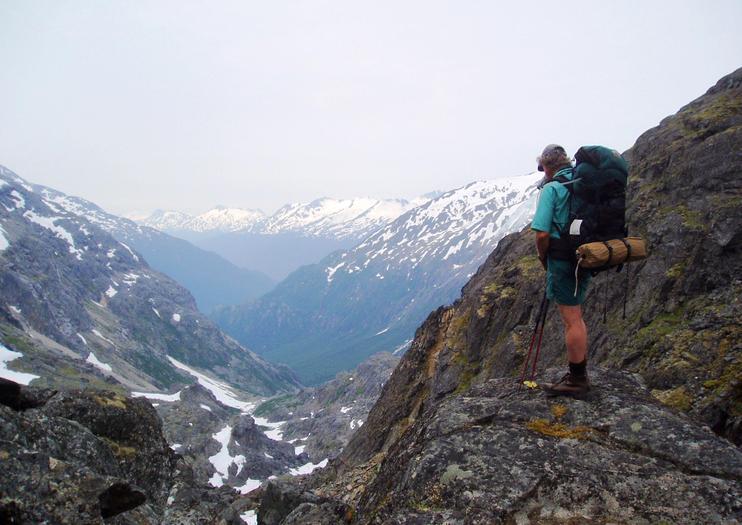 Following the Chilkoot Trail is to take a journey into the past, to the time before the gold-rush era of prospectors when the Tlingit people used the route to trade coastal products for pelts and plants with the people of the interior. The trail is a significant historic site, and has been described as ‘the world’s longest outdoor museum.’

The 33-mile (53km) trail is for walkers only, who take three to five days to follow the often difficult route that in gold-rush days was the most direct path from the port at Skagway to the gold fields of the Yukon. The route was shorter than White Pass but more deadly.

Prospectors taking the Chilkoot route were advised to carry a ton of gear and rations, enough to ensure self-sufficiency for one year. Alternative transportation systems devised to help carry their infamous ton of gear included aerial tramways, pack animals and Tlingit porters.

Hiking the Chilkoot Trail is such a popular recreational activity that permit numbers are limited during the peak season months of June to early September.

In Alaska, the Chilkoot Trail is part of the Klondike Gold Rush National Historic Park. Beginning at the bridge over the River Taiya near the town of Dyea (15 miles/24km from Skagway, the trail goes over the Coast Mountains and Chilkoot Pass to Lake Bennett in British Columbia.

There are nine official campgrounds dotted along the trail. To protect against attracting the unwanted attentions of bears along the route, food must be safely stowed and bear spray repellent carried.
Address: USA
Read MoreShow Less

8
The Klondike Gold Rush National Historic Park is an ideal location to experience Alaska’s natural beauty and gold rush history. This tour saves you the hassle of (horse) navigation and gives the riding knowhow to travel the park’s trails on a horse, visiting Dyea ghost town and the Chilkoot and White Pass trails. Plus, your tour includes round-trip transportation from Skagway and local snacks.
…More
From
US$178.72
From
US$178.72

23
Get adventurous in Skagway with three outdoor activities in one 5.5-hour combo tour. You'll bike through the rainforest, hike on the Chilkoot Trail, and take a scenic float down the Taiya River. Select a morning or afternoon departure time when booking.
…More
From
US$199.00
From
US$199.00

Explore the Chilkoot Trail, Taiya River, and White Pass Summit on a 6-hour tour from Skagway. Learn about the Klondike Gold Rush during a short hike on the Chilkoot Trail, then float on the Taiya River aboard a stable raft. Finally, take a scenic drive north to White Pass Summit for sweeping views of the mountains, glaciers, and alpine lakes of the Yukon and British Columbia. Make a photo stop at the 'Welcome to Alaska' sign then pass through U.S. customs to return to Skagway.
…More
From
US$208.95
From
US$208.95

1
Float past the ice-capped peaks, glacial lakes, and lush forests of the Taiya River on this 2.5-hour scenic rafting cruise. Along the way, learn about the region’s Gold Rush history, spot wildlife in the Dyea Valley, and see the starting point of the historic Chilkoot Trail.
…More
From
US$89.87
From
US$89.87

Things to do near Skagway