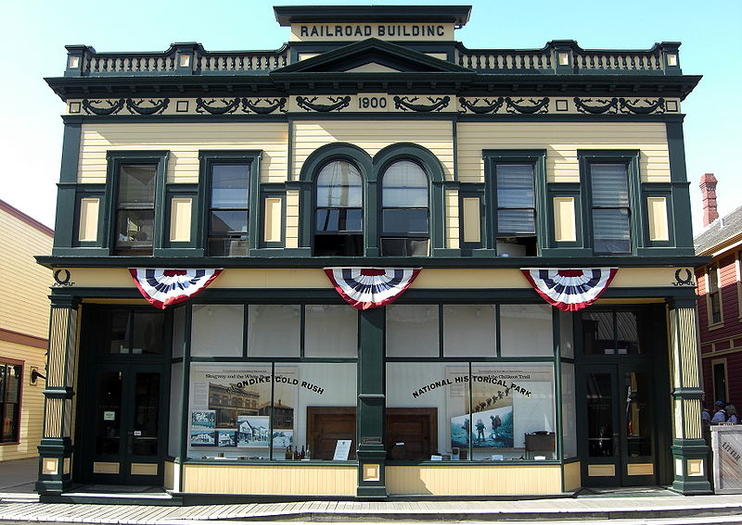 The Klondike is synonymous with the gold rush days of the late 19th century, when the frontier settlement of Skagway exploded from a population of just two to 20,000 in a mere 10 years.

The Klondike Gold Rush National Historical Park protects the memory of these days, preserving the trails, towns and buildings of the gold rush era. Skagway was the gateway town to the gold of the Klondike, which lay 550 miles (885km) north, near the junction of the Klondike and Yukon Rivers in Dawson City.

The Chilkoot Trail is the most famous of the gold rush routes followed by the miners, originally created by the Tlingit people. The park also preserves the downtown Skagway Historic District and its prized collection of authentic 100-year-old wooden buildings, including the fun Mascot Saloon and historic Moore House and Cabin.

Drop into the park’s visitor center to watch the video about the area’s gold rush history and pick up information about the local trails, including the famous Chilkoot Trail.

Rangers lead a range of activities, including walking tours and talks through the historic buildings and countryside.

Photo by Reywas92 sourced from WikiCommons

199
While in port, explore Skagway's local highlights and the White Pass Summit during this 2.5 hour mini-bus sightseeing shore excursion. Travel along the Klondike highway with sweeping views of coastal rainforest cloaked mountains and rugged mountain valleys. Stops include waterfalls and a classic photo at the ‘Welcome to Alaska’ sign. Breathe in crisp mountain air near the Summit and sweeping dramatic views at Tormented Valley. Along the way, hear entertaining tales of the 1898 Klondike Gold Rush narrated by your experienced guide.
…More
From
US$56.00
From
US$56.00

8
The Klondike Gold Rush National Historic Park is an ideal location to experience Alaska’s natural beauty and gold rush history. This tour saves you the hassle of (horse) navigation and gives the riding knowhow to travel the park’s trails on a horse, visiting Dyea ghost town and the Chilkoot and White Pass trails. Plus, your tour includes round-trip transportation from Skagway and local snacks.
…More
From
US$178.72
From
US$178.72

1
Don’t settle for an incomplete tour of the Yukon Territory—maximize your time in Skagway with this extended drive through the Yukon. This small-group tour makes it possible to learn about local history and see some of the Yukon’s top sights in less than a day. Drive through the summit of White Pass across British Columbia to Carcross—the crossroads of the Klondike—while stopping for fun photo opportunities along the way.
…More
From
US$131.25
From
US$131.25

1
Float past the ice-capped peaks, glacial lakes, and lush forests of the Taiya River on this 2.5-hour scenic rafting cruise. Along the way, learn about the region’s Gold Rush history, spot wildlife in the Dyea Valley, and see the starting point of the historic Chilkoot Trail.
…More
From
US$89.87
From
US$89.87

3
Challenge yourself in the wilds of Alaska on a full-day alpine hiking tour on White Pass, a scenic ridge bordering the Yukon Territory. Depending on the season, trek through wildflower fields, scramble over boulders, or use crampons and ice picks for a snowy ascent to the summit of Feather Peak or Mount Cleveland. This mountaineering adventure is designed for experienced hikers and climbers.
…More
From
US$390.42
From
US$390.42

Things to do near Skagway