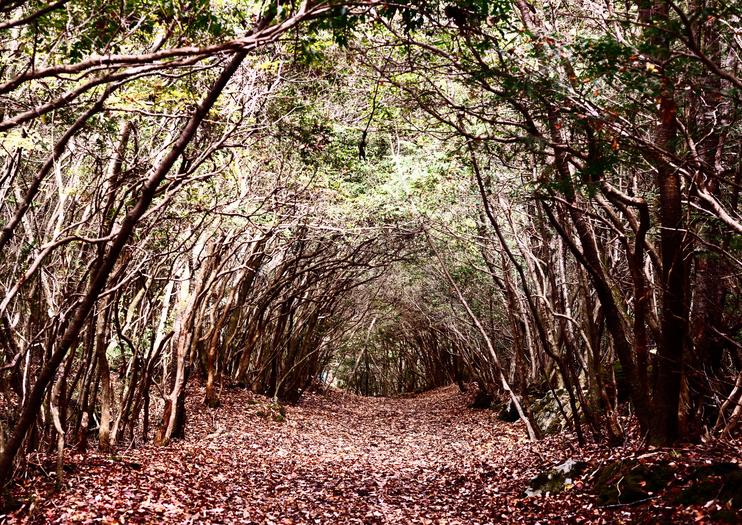 The dense Aokigahara Forest lies at the northwestern base of Mount Fuji, the iconic, near-symmetrical cone-shaped mountain that rises in eastern Japan. It holds the grim distinction of being the second-most popular destination for people intent on dying by suicide. Despite this, it’s a peaceful place to hike and enjoy nature.
The Basics
The Aokigahara Forest is made up mostly of hemlock fir, Japanese cypress, and other evergreen needle-leaf trees. Because it is so dense and easy to get lost in, for centuries it has been a popular place for the desperate to go to end their lives. There are signs throughout the forest warning people of the danger of getting lost here, and asking them to seek help if they’re feeling suicidal. Many Japanese people believe that the forest is haunted.
Keen hikers can go to Aokigahara independently and explore at their own pace. Alternatively, some sightseeing tours around Fuji and the Fujigoko region include a stop at Aokigahara. There’s a fun cave to explore that can only be accessed on a guided tour.
Things to Know Before You Go
How to Get There
The most convenient way of reaching Aokigahara from Tokyo is by bus. Take the JR Bus Kanto from Tokyo Station, or the Basuta Shinjuku from Shinjuku Station, and get off at Kawaguchiko. Each trip takes about two hours. From Kawaguchiko, take a local bus to Aokigahara, or hike there.
When to Get There
While it’s possible to visit at any time, Japan’s winters are cold and it’s common to find snow at ground level around Mount Fuji in the winter. Mid-summer can be very hot and humid. For the most comfortable hiking conditions, visit in spring or autumn.
Hike Up Mount Fuji
In the summer, Mount Fuji is covered in climbers. Most start their ascent from the fifth station part-way up the mountain, but adventure-lovers can begin from the pilgrim’s route that monks traditionally followed, starting at the base of the mountain. This adds a full day of walking to the normal two-day climb, but the more gentle rise in altitude can be a good option for fit hikers.
Address: Aokigahara Forest, Japan
Read MoreShow Less

97
Find the best viewpoints on this private tour from Tokyo via minivan. Choose between visiting Mt. Fuji or Hakone and relax as your guide navigates twisting mountain roads with ease en route to sites such as Lake Kawaguchi, Lake Ashi, and Arakurayama Sengen Park. This full-day tour also includes hotel pickup and drop-off, a guide available in several languages, and the possibility to curate your trip to suit your interests—a privilege only allowed by a private tour.
…More
From
US$834.51
per group
From
US$834.51
per group
Face masks required for travelers in public areas
Face masks required for guides in public areas
Face masks provided for travelers
Learn More
Taking safety measures

This value-packed trip with a nationally-licensed and experienced multilingual tour guide is a fantastic and efficient way to explore Nikko! Mt Fuji is about 100 km away from Tokyo, and it’s one of the most popular destinations for a day-trip from Tokyo through the year. Numbers of tourist attractions are available in and around Mt Fuji offering visitors unforgettable experiences with the stunning scenery. Your guide will start your day with a morning pickup at your hotel. Let us know what special requests you have for the day and we will customize your itinerary in advance! Note*1: Please select your must-see spots from a list in the tour information to create your customized itinerary. Note*2: The Nationally-licensed Tour Guide-Interpreter certification is issued by the Japanese government requires a good knowledge and understanding of Japanese culture and history.
…More
From
US$180.62
Price varies by group size
From
US$180.62
Price varies by group size
Face masks required for guides in public areas
Hand sanitizer available to travelers and staff
Social distancing enforced throughout experience
Learn More
Taking safety measures

Things to do near Tokyo