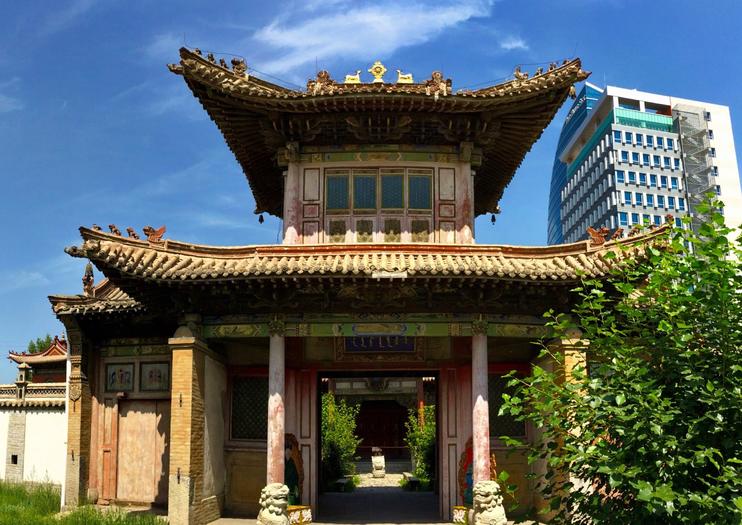 In the heart of Ulaanbaatar, the Choijin Lama Temple Museum (Choijin Lama Monastery) houses five attractive temples with elaborate paintings, colorful masks, and ornate statuary, including several sculptures engaged in tantric sex. The monastery was built between 1904 and 1908 for the Choijin Lama, a brother of the Bogd Khaan who became Mongolia’s state oracle.
The Basics
Gain admittance to the Choijin Lama Temple Museum for a small charge, with discounts for students and children. Your ticket includes an audio guide, and there are also volunteer guides on hand. Just a short stroll from Sükhbaatar Square, it’s easy to visit the Choijin Lama Temple Museum independently, although some travelers will prefer to combine it with a tour of historic Ulaanbaatar sights such as the Bogd Khaan Palace Museum, the Gandantegchinlen Monastery, and the Dashchoilin Monastery.
Things to Know Before You Go
How to Get There
The Choijin Lama Temple Museum stands in the heart of downtown Ulaanbaatar, less than half a mile (650 meters) south of Sükhbaatar Square and within walking distance of many downtown hotels. Particularly during Mongolia’s icy winters, some travelers may prefer the convenience of an organized tour that includes door-to-door round-trip transfers.
When to Get There
During the summer season (mid-April to mid-September), the Choijin Lama Temple Museum opens from morning until evening seven days a week. Ask about evening cultural performances on the grounds. In winter, the museum operates reduced hours, opening from late morning to afternoon between Wednesday and Sunday only.
Who Was the Choijin Lama?
Born in Tibet, Luvsan Haidav was a brother of Agvaanl Uvsanchoijinyam Danzan Vanchüg, Outer Mongolia’s spiritual leader (Bogd Khaan) and ruler of the nation. Haidav suffered fainting fits, which those around him saw as a sign of a spiritual connection, so he underwent training to become the state oracle of Mongolia. His ceremonial title was Choijin Lama.
Address: Jamyn Gunii Gudamj, Ulaanbaatar, Mongolia
Read MoreShow Less

Immerse in Mongolia’s ancient Buddhist culture without grappling with Ulaanbaatar’s patchy public transport on this small-group tour. Learn about the nation’s complex regal and religious history from your guide as you tour the Gandantegchenling Monastery, the Bogd Khaan Palace Museum of Mongolia, the Choijin Lama Temple Museum, and the Dashchoilin Monastery. Perfect for lovers of history.
...  More
From
US$122.06
Price varies by group size
From
US$122.06
Price varies by group size
Learn More

2
Ulaanbaatar offers many fascinating museums but English-language signage is in short supply. So history buffs won’t want to miss this private guided tour of four of Mongolia’s most culturally important collections. Soak up the culture as you explore the Zanabazar Museum of Fine Art, the National Museum of Mongolia, the Bogd Khaan Palace Museum of Mongolia, and the Chojin Lama Temple Museum. Tour includes lunch and door-to-door round-trip transfers.
...  More
From
US$70.00
From
US$70.00
Learn More

1
On this trip you are able to see most unspoiled natures of northern Mongolia. Also will have a chance to visit real nomads life and their lifestyles along the trip. If you want to be yourself and meditate, this trip will give your own space. Riding a Mongolian horse will be a much different experience than any other horses. Hopefully, our friendly horse trekking guides will show their homelands that beautiful Darkhad Valley, Khoridol Saridag SPA and Khovsgol Lake National Park. Even it is hard, you will be fully energized and refreshed at the end of the trip.
...  More
From
US$1,990.00
Price varies by group size
From
US$1,990.00
Price varies by group size
Learn More

Things to do near Ulaanbaatar