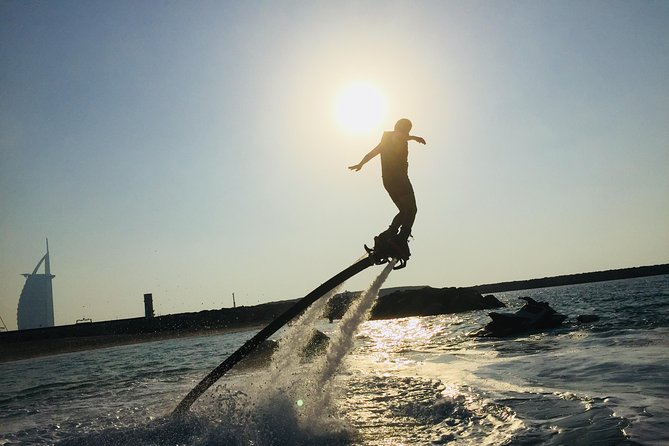 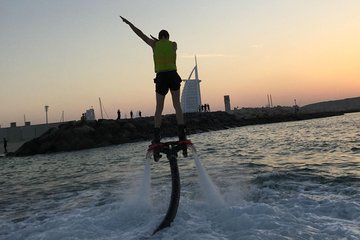 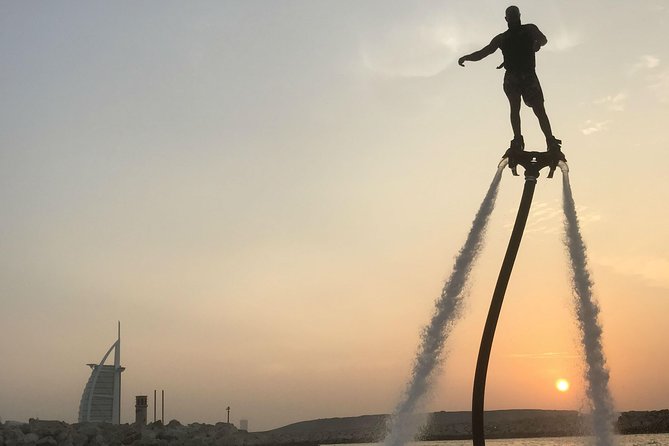 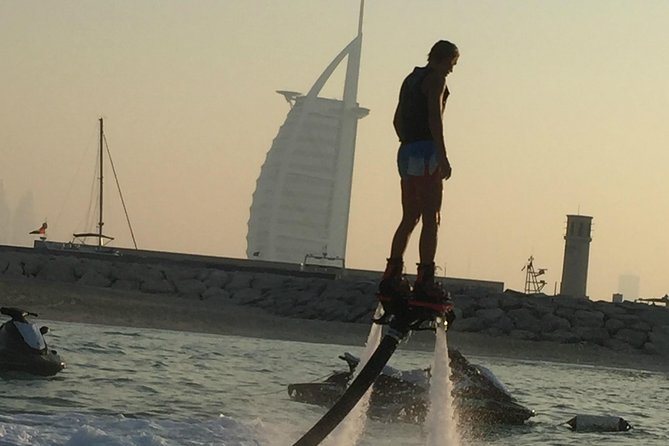 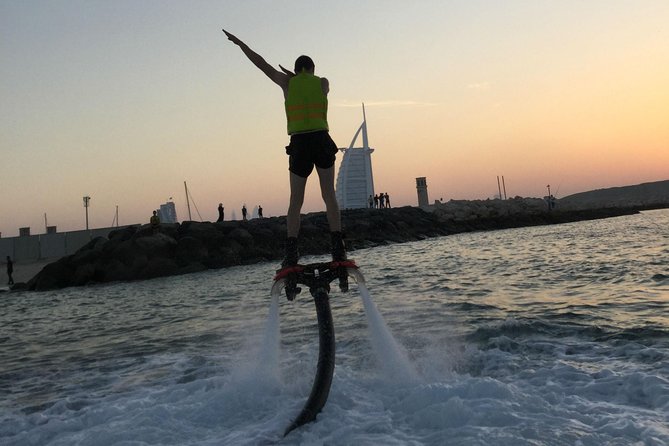 Soar high above Dubai’s beautiful waterfront on this guided, 25-minute flyboard excursion. Jump up to 19 feet above the the blue sea of Dubai, propelled by the power of this water jet pack, providing a one-of-a-kind view of the Burj Al Arab and the surrounding area. Get personalized attention and professional instruction, then grab the throttle and ride the flow. It’s a thrilling experience unlike any other. Safety briefing and equipment included.

andreeazbagan
Jet Ski Tour of Dubai: Burj Al Arab, Dubai Marina, Atlantis, Palm & Burj Khalifa | Sep 2019
We had a lot of fun, going very fast on the jetsky. I wish we had more time to go even further as the tour was intended but due to other people not going as fast we didn't have enough time. Great pictures, wish we had some videos as well.
...Read more

MommyDenitta
30-Minute Jet Ski Tour of Dubai: Burj Al Arab | May 2019
A fantastic experience, great start to our holiday! Staff are welcoming and very experienced. We will be back again next year! Deni & Alex
...Read more

Loved it. Thanks to Hedi for taking...

Loved it. Thanks to Hedi for taking pictures and videos. The most memorable experience in Dubai... A MUST DO

Since this was my first exposure to...

Since this was my first exposure to this type of activity, I stated so to the instructor, he said no problem, most such visitors were that. He had previously texted us a recommended time to arrive, however I had not looked at my phone, but our arrival earlier so was okay, as they were just releasing the current visitors. He and his associate patiently explained all the safety requirements, also where we were going and how fast, in the small port. Outside the port, he had joined my experienced son, and they were ahead of me. After some slow skiing, to my satisfaction, I caught up to them! The guide even took pictures on his phone, and sent them to us. I was complimented on how fast I was going! These pictures were taken by the world class 7 star hotel! All in all, an unforgettable experience, the only thing wrong was the short 30 minute duration. I could have stayed there for hours. Thanks to the guides!

The tour started 30 minutes later than promised. The instructor was incredibly unprofessional/incompetent and drove really far ahead of everyone, not monitoring how individuals were riding. The jet skis were also not great. There are many other options for Jet Ski Tours out there. For safety reasons, avoid this one.

Yet another first for me... Jet Skiing. The manager was a little grumpy, probably due to the fact I woke him up early on the day of my booking to validate... oops! Despite this, he sent me clear instructions via WhatsApp e.g. bring my passport and a towel and supplied detailed directions of how to get there. He even offered to talk to the cab driver if he struggled to find the place. He also called later to advice me they were running slightly late and had rescheduled my slot, which I appreciated. My wife and I arrived and unfortunately the manager was not much more cheery in person than earlier. Thankfully our instructor was more friendly and once we were given a life jacket, we were sat on the jet ski, posing for a pic before receiving a tutorial about use of the kill switch etc. We ambled out of the dock on impulse power, having been told several times not to press the gas. Once clear we were given the green light to open it up and boy did I ever. Trust me these things can shift and I couldn't have predicted the massive adrenaline rush of skipping over the water at 55 kph. We rode for some time and finally arrived at the Burj Al Arab where we posed for some more pics which are sent to you free of charge via WhatApp, which I thought was a nice touch. We mucked about at the Burj Al Arab for a while then headed back. We were given a bottle of water and the pics transferred. Will definitely do this again if given the chance. Many thanks Nemo Watersports!

Very nice and long tour considering the price. The guide allows plenty of time to go at your own pace whether it be fast or slow.

Great time, but our guide wasn't the...

Great time, but our guide wasn't the most friendly unfortunately.

Bought this as a birthday gift my...

Bought this as a birthday gift my husband who loved it!!!
Amazing views looking upto see the Burj was awesome.
A great touch was having all photos sent to our phone whilst out there at no extra cost!!

Awesome! They take pics for you, and...

Awesome! They take pics for you, and it's a good length of time out. Jetski' are rapid! 1500cc

SO MUCH FUN! Yanis, my instructor...

SO MUCH FUN! Yanis, my instructor, was extremely knowledgeable of jet skis and helpful in every way. Had such a blast skiing across the Arabian Sea and around Dubai sites! He took multiple pictures and videos and gave me opportunities to take pics as well. He even gave me a ride to the next destination. Would definately do it again, and again, and again!

Adrenaline galore and great value!! Day 1 I jet skied with an instructor who took me to see the main attractions. Having such a great time I invited a friend to join me for a fly boarding challenge the next day. Awesome! Competent staff and convenient location. Go Nemo Water Sports!!