Private Tour to Knossos and Archaeological Museum or Shopping from Heraklion 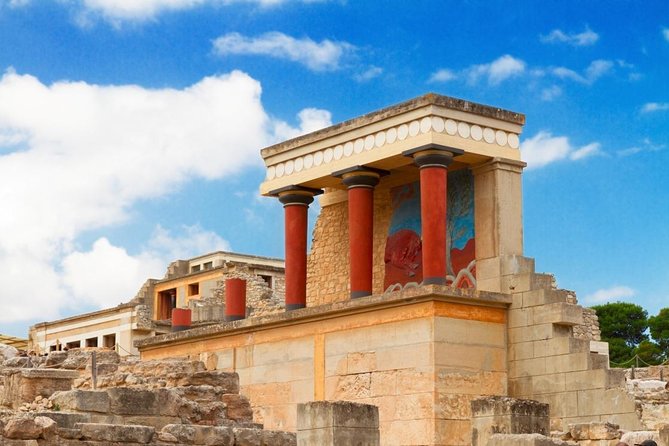 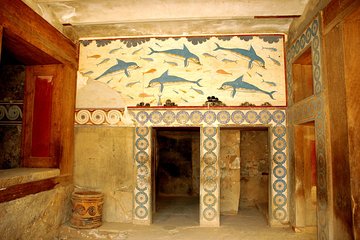 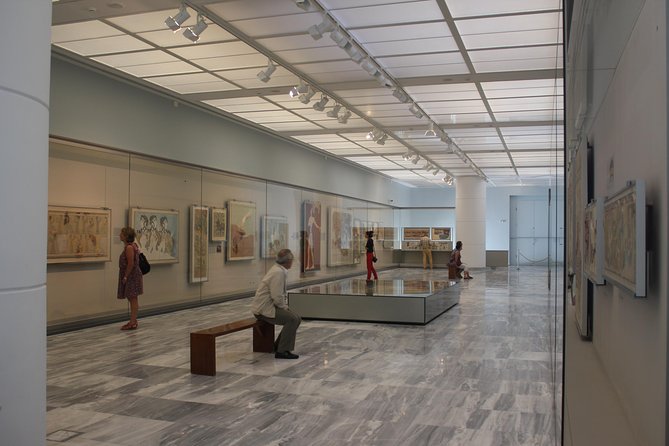 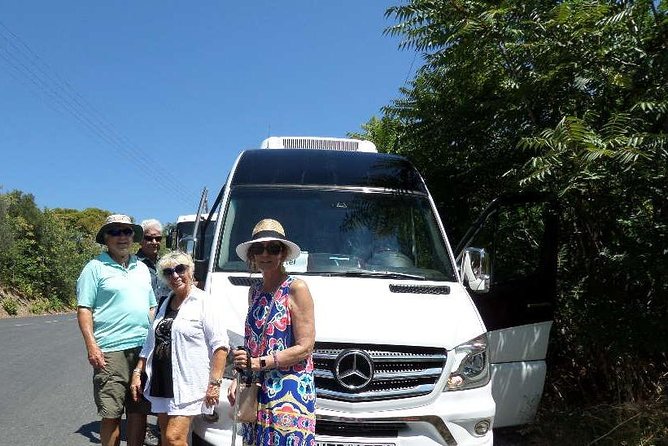 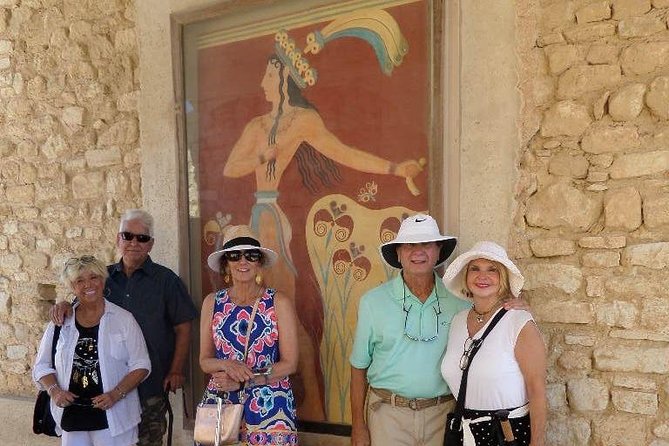 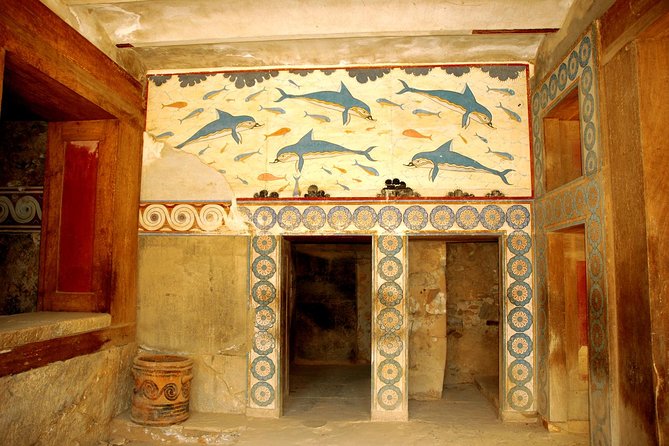 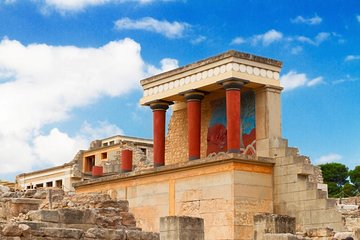 Rewind 4,000 years to Europe’s oldest civilization on a private tour from Heraklion. After pickup from Heraklion port, travel by private minivan to Knossos, home to the ruins of a Minoan city-state. Tour the archaeological site, seeing highlights such as the Throne Room and frescoes as you learn their history. Then, after seeing Heraklion’s landmarks, visit Agios Titos Church and Heraklion Archaeological Museum. Port pickup and drop-off included.

Select a morning or afternoon departure, and on the day, meet your private guide outside Heraklion cruise port terminal. Then, settle inside your private, air-conditioned minivan and travel through Crete’s bustling capital to the Knossos archaeological site, home to the remnants of the Minoan Palace of Knossos, dating from around 1900 to 1600 BC.

Considered Europe's oldest city, this ancient place has roots stretching back to Neolithic times in around 7,000 BC, and is believed to have served as an administrative and religious center. At the peak of the Minoan civilization, it was home to an estimated 5,000 to 8,000 people, making it a city-state rather than a palace alone.

On arrival, head inside (own expense) the complex and enjoy a guided tour through the partially restored chambers, courtyards, halls, and shrines. As you look around, learn the history of the site and delve into the Greek myth that King Minos kept his half-human, half-bull son, known as the Minotaur, in an underground labyrinth here.

View highlights including the partly reconstructed Throne Room, Grand Staircase, and storerooms, and marvel at some of the extensive frescoes—many restored in the early 20th century—including the famous bull-leaping mural on the palace’s east wall.

Having explored Knossos, rejoin your minivan and return to Heraklion for a sightseeing tour along its Venetian-era walls. En route, see landmarks such as the Venetian harbor, Church of St. Titus, and Lions Square, centered on the ornate Morosini fountain.

Then, choose to head inside Heraklion Museum (own expense) to tour its stunning collections of Minoan art and artifacts, or enjoy free time to stroll around the colorful shops.

When it’s time, your tour finishes with a drop-off at the cruise port.
Itinerary
Stop At:
The Palace of Knossos
Knossos is the largest Bronze Age archaeological site on Crete and has been called Europe's oldest city. Settled as early as the Neolithic period, the name Knossos survives from ancient Greek references to the major city of Crete. The palace of Knossos eventually became the ceremonial and political centre of the Minoan civilization and culture. The palace was abandoned at some unknown time at the end of the Late Bronze Age, c. 1,380–1,100 BC.[4] The reason why is unknown, but one of the many disasters that befell the palace is generally put forward.
... MoreLess
Duration: 1 hour 30 minutes
Admission Ticket Not Included
Stop At:
Agios Titos Church
Saint Titus, or more properly the church of Saint Titus in Heraklion, is one of the most important monuments in the centre of town, on 25th of August Street. It is set in a lovely square with a few cafés and bars, Agios Titos Square. Agios Titos means Saint Titus in Greek.
... MoreLess
Duration: 30 minutes
Admission Ticket Free
Stop At:
Heraklion Archaeological Museum
The Heraklion Archaeological Museum is a museum located in Heraklion on Crete. It is one of the greatest museums in Greece and the best in the world for Minoan art, as it contains the most notable and complete collection of artefacts of the Minoan civilization of Crete.
... MoreLess
Duration: 1 hour
Admission Ticket Not Included
Show 1 More Stop

See all safety measures taken by Private Tour to Knossos and Archaeological Museum or Shopping from Heraklion.

3.5
3 Reviews
5 stars
1
4 stars
1
3 stars
0
2 stars
1
1 star
0
Reviews by Viator travelers
Very disappointing. The guide was...
William J E
, Jul 2018
Very disappointing. The guide was knowledgeable and well informed. But it was very hot and the guide wanted to take pictures of us at least 6 times. We felt like he was dragging things out. The van was nice and clean with a driver. The museum visit was nice but the guide couldn't hold 6 peoples attention. Not a good value for the money.
... MoreLess
Response from Host , Aug 2019
thank you for this review. Our guides indeed may volonteer to take pictures for the clients. The specific guide is experienced but maybe did not fit to your expectations. Our company operates on permanent basis with a large team of licensed , experienced guides
... MoreLess
Private tour with a guide with...
Suzy
, Jul 2017
Private tour with a guide with detailed knowledge of, and enormous passion for , Knossos who made the city, its kings, the Goddess Earth Mother, Zeus and his progeny and, indeed the history, of Crete come alive!
... MoreLess
Reserve Now & Pay Later
We'll reserve your spot today, and you can cancel up to two days* before your experience without making a payment. Secure your spot with ease, stay flexible, and never miss out.
How it works
Find your experience
Choose the experience you want knowing you can secure your spot without being locked in.
Make a reservation
Reserve now and pay later to secure your spot, commitment-free.
Choose when to pay
Come back to pay once your plans are set, or let auto-pay kick in two days* before your experience.
Enjoy your experience
Now you're all set! Have a great time.
Frequently Asked Questions  | Terms & Conditions
*Up to 9 days depending on the booking/product
Reserve Now & Pay Later
Secure your must-do activities without being locked in
Learn More

Venetian WallsWatercity Water ParkStar Beach Water ParkMalia
Lowest Price Guarantee
We guarantee the lowest price on all 200,000+ experiences we sell. If you find the same product cheaper within three days of booking or while you're in your destination, we'll refund the difference.
It's Easy To Do