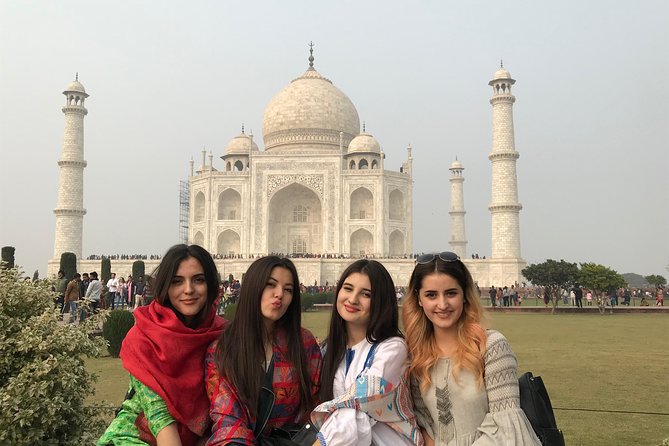 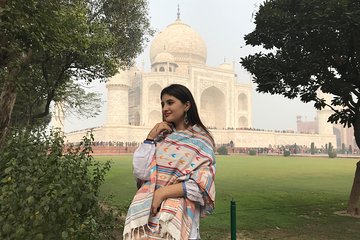 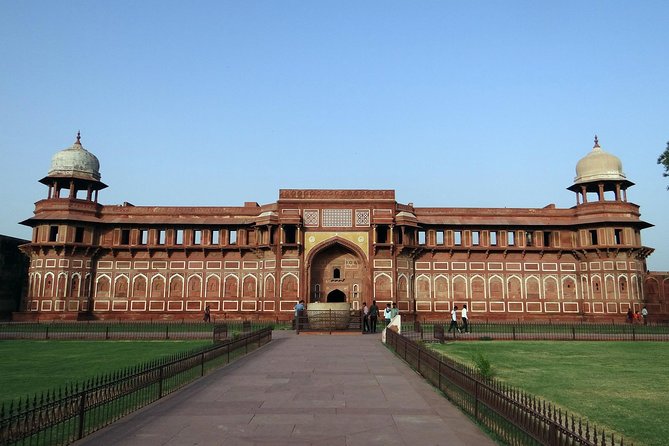 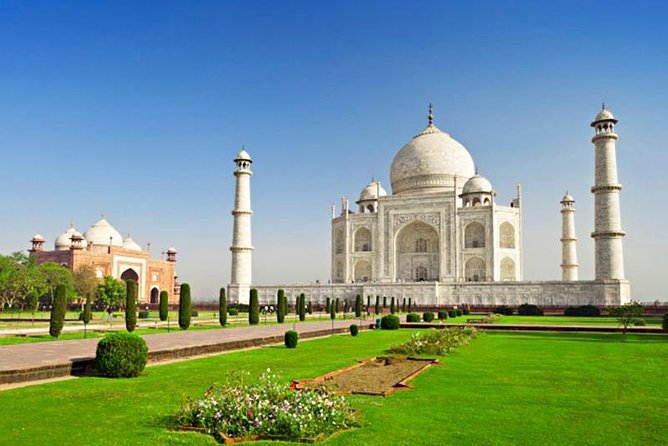 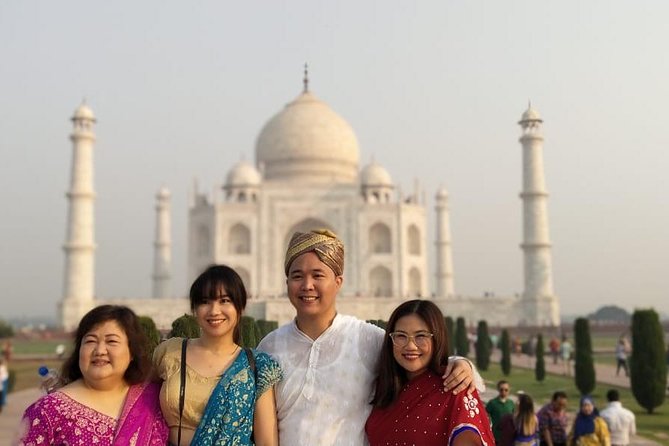 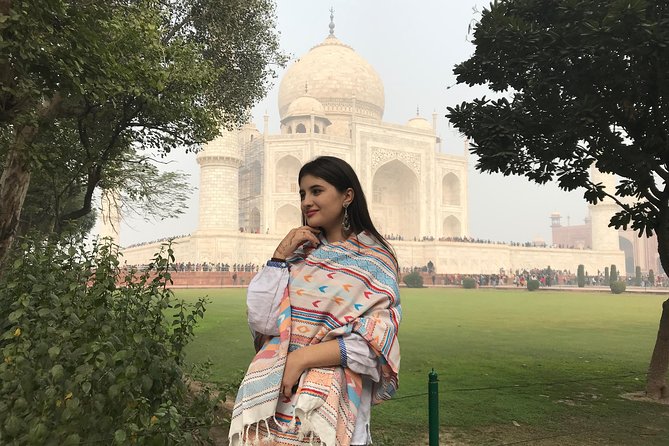 If you’re planning to visit Agra from Delhi, squeeze every ounce of sightseeing from your trip with this full-day private tour. After viewing the marble masterpiece of the Taj Mahal, tour two more of Agra’s Mughal treasures: the Red Fort and Itmad-ud-Daulah (Baby Taj). Plus, experience sunset views of the Taj from the Mahtab Bagh or  ‘Moonlight Gardens.’ Private transport, in-depth privately guided visits, and Delhi hotel pickup and drop-off included.

After hotel pickup in Delhi, travel by private, air-conditioned vehicle to Agra, home to the Taj Mahal, one of the world’s most beautiful monuments.

Following your journey, arrive at the UNESCO-listed Taj and join up with your private guide. Then, head inside (own expense) and marvel at the white marble masterpiece, built as a royal mausoleum in 1652. Admire the dream-like marble domes, archways, and towers, and cross the gardens to see the inlaid arcades, inner hall and terraces close-up.

As you explore, hear the moving love story behind the building. Learn how the Mughal emperor Shah Jahn commissioned it as a tomb for his beloved queen, Mumtaz Mahal, and how it took 20,000 workers 22 years to build.

Afterward, continue with your guide to the Red Fort, another UNESCO-listed must-see. Built by the Emperor Akbar, this vast, 16th-century walled fort displays a blend of Hindu and central Asian architectural styles. Go inside (own expense) to wander through the courtyards, mosques, and chambers, and see the tower where Shah Jahan was imprisoned by his son within view of the Taj.

After a break for lunch (own expense), visit (own expense) the Tomb of Itmad-ud-Daulah, nicknamed the ‘Baby Taj,’ on the banks of the River Yamuna. A precursor to the Taj dating from 1628, this exquisite mausoleum was built by the Empress Nur Jahan for her father, and is filled with artistic detail. Explore the beautiful rooms, adorned with trellises and precious stones, and hear how their design reflects Persian influences.

Finally, as the sun sets, head inside (own expense) the Mahtab Bagh or ‘Moonlight Gardens,’ located across the Yamuna from the Taj Mahal. Drink in the stunning views of the monument from here just as dusk falls.

Finally, return to Delhi and finish with a hotel drop-off.
Itinerary
Stop At:
Taj Mahal
the Taj Mahal, celebrated for its architectural magnificence and aesthetic beauty. Emperor Shah Jahan built this exquisite white marble mausoleum for his favourite queen Mumtaz Mahal. The monument was commissioned in 1631 and took 20,000 artisans, 22 years to complete. Witness the dramatic interplay of light as the sun rises and casts its golden rays over the pearl white tomb, recreating the magic of the Taj. Once you have taken some memorising morning photos, there is time to explore the Taj.
... MoreLess
Duration: 1 hour 30 minutes
Admission Ticket Included
Stop At:
Agra Fort
the Agra Fort, an outstanding example of Mughal architecture and stronghold of the Mughal Empire under successive generations. Shah Jahan, the creater of Taj, spent the last years of his life time imprisonment awarded by his son Aurangzeb, here. It was built in the late 1560`s by their predecessor, Akbar, with later embellishments by Jahangir, his son, and Shah Jahan, his grandson.
... MoreLess
Duration: 1 hour
Admission Ticket Included
Stop At:
Tomb of Itimad-ud-Daulah
Itmad - ud - Daulah’s Tomb, the marble mausoleum built by Nur Jahan, the wife of Emperor Jahangir, in memory of her father, Ghiyas Beg. Also known as the ‘Baby Taj’, it is beautifully conceived in white marble, mosaic and lattice.
... MoreLess
Duration: 30 minutes
Admission Ticket Included
Show 1 More Stop

5.0
17 Reviews
5 stars
4 stars
3 stars
2 stars
1 star
Reviews by Viator travelers
Tour was very...
blueguroo
, Oct 2017
Tour was very good!!guide/driver/car/tour/safety.
... MoreLess
Recently, I traveled to Delhi for...
Melissa S
, May 2017
Recently, I traveled to Delhi for work with three colelagues who had never been to India. Well, you can't travel that far without seeing the Taj Mahal. I'm so glad that I was able to take them and this was perfect. The company that Viator contracted, Akbran Tours was awesome. They were so flexible with our itinerary and alllowed us to move at our own pace and really make it exactly what we wanted. The guide was excellent and he showed us some excellent shopping places as well. We enjoyed it so much that I assisted another colleague in booking a day trip to the Taj Mahal with them as well. Needless to say, he loved it! The owner/operator of Akbran Tours was very helpful. I have no hesitation in recommending this trip to anyone that is going to Delhi and wants to maximize their time and see the Taj Mahal.
... MoreLess
Amazing tour, really well priced, great...
Mateo P
, Nov 2015
Amazing tour, really well priced, great guides and awsome attention by Sumit.
... MoreLess
Reserve Now & Pay Later
We'll reserve your spot today, and you can cancel up to two days before your experience without making a payment. Secure your spot with ease, stay flexible, and never miss out.
How it works
Find your experience
Choose the experience you want knowing you can secure your spot without being locked in.
Make a reservation
Reserve now and pay later to secure your spot, commitment-free.
Choose when to pay
Come back to pay once your plans are set, or let auto-pay kick in two days before your experience.
Enjoy your experience
Now you're all set! Have a great time.
Frequently Asked Questions  | Terms & Conditions
Reserve Now & Pay Later
Secure your must-do activities without being locked in
Learn More