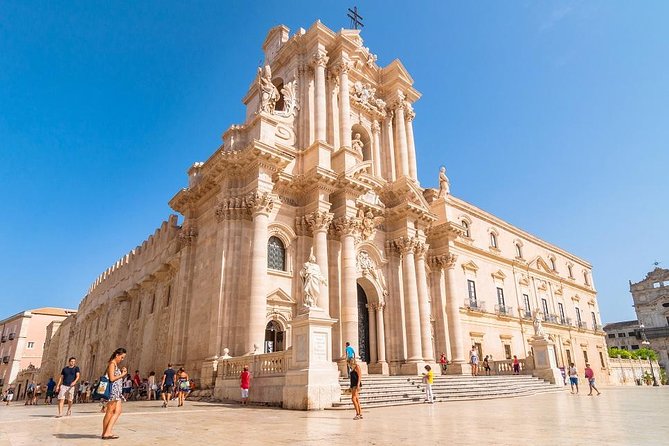 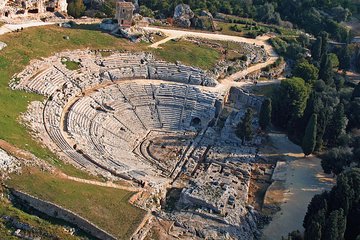 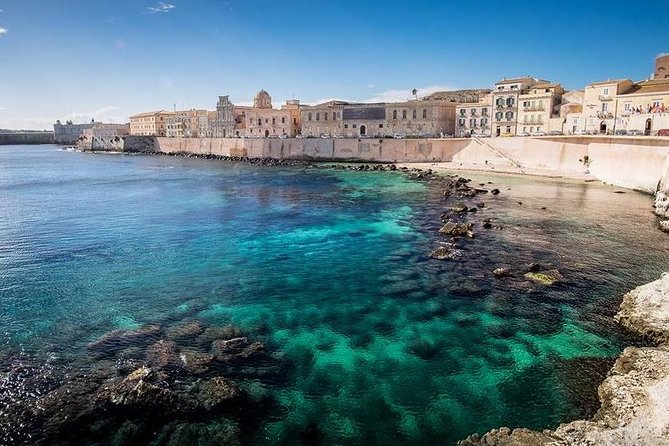 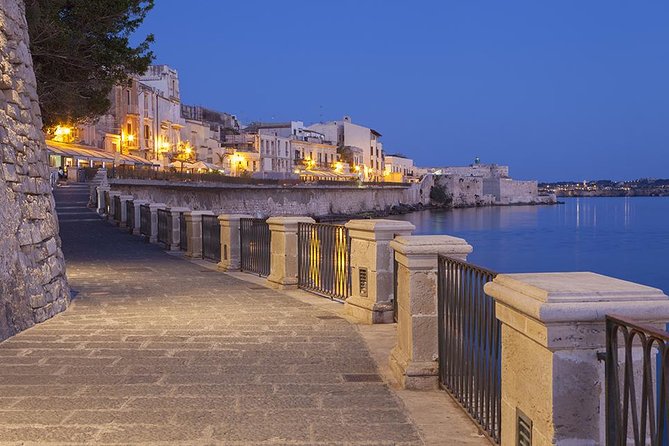 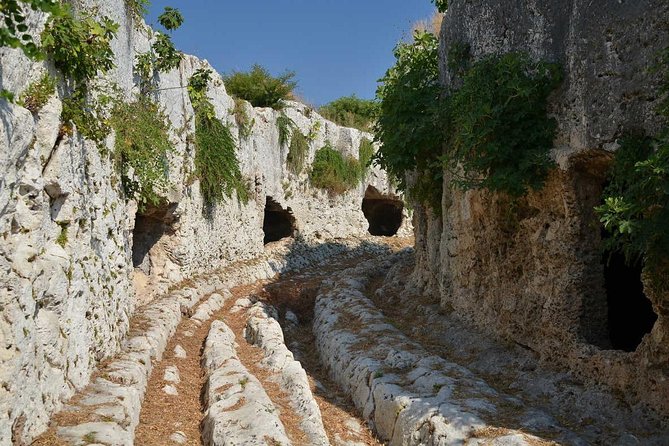 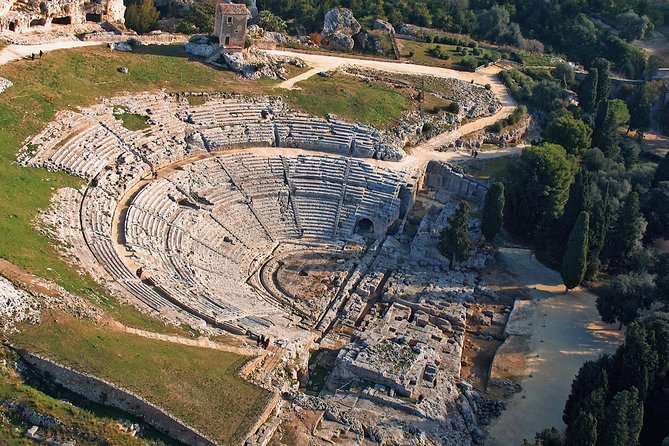 Take a tour of three southeastern Sicilian cities on this private tour with hotel or port pick up. See ancient Greek and Roman ruins at the Neopolis Archeological Park in Syracuse; stroll through the small streets of the island of Ortigia and shop for Sicilian products; and discover the UNESCO-listed baroque architecture of Noto, including its magnificent cathedral.

4.5
7 Reviews
5 stars
4 stars
3 stars
2 stars
1 star
Reviews by Viator travelers
Siracusa Ortigia and Noto
lanzii2019
, Oct 2019
The driver did get us to our destination ,however, drove a little too fast for the group’s liking. The vehicle was a little old as well which made the ride a little uncomfortable. Overall we were somewhat satisfied.
... MoreLess
Fantastic private tour of Siracusa,Ortigia,& Noto Tour
Cathy0515
, May 2019
My wife and I took A private tour on Sunday, May 2, 2019 to Siracusa, Ortigia, and Noto. Our driver, Giuseppe, was on time, drove safely, and had a great personality. His car was clean and comfortable. He shared a tremendous amount of very interesting knowledge about the sites we visited. He attended to all of our needs. We had great conversation about many topics during the drive. Part of our trip was in pouring rain and Giuseppe made sure he dropped us off right at the entrance. He even gave us his own umbrella to use on the tour to keep us dry! It rained on and off during the day, and he was very flexible in allowing us to wait until the rain stopped so that we could use our time to maximize seeing the sites. When we return to visit Sicily, we will request Giuseppe to take us on another tour! I highly recommend Giuseppe for any private tour of Sicily. He is kind and very knowledgeable about the island of Sicily.
... MoreLess

Michele_C
Villa Romana Del Casale in Piazza Armerina and Valley Of Temples in Agrigento | Mar 2020
Viator- I am very concerned about the Coronavirus relative to my experience yesterday with your driver to The Valley of the Temples. The driver was sick, with runny nose and cold like symptoms. He is from Catania where the Coronavirus has been detected. The driver said he was ill and wanted his boss to find someone else to drive in his place but no one else was found. He said he should not be driving and should have stayed home. Will you please reach out to the driver and see if you can have him tested with the virus. I am very concerned having been in a closed car with him for many, many hours. Not a good judgement on the part of Viator to allow this to happen.
...Read more

Fantastic Excursion (Once We Got Started)

Tom_O407
ETNA TOUR & LUNCH in a WINERY with WINE TASTING | Dec 2019
To be clear, this rating should have been a 5 (Excellent), and really was a "5" for the Tour Company & Guide (Taxi Catania NCC), but Viator messed up royally by failing to communicate properly between the Tour Company and me (the user). As a result, when we got to the meeting point at the port exit, we found no tour guide, and after waiting for an extra 30 minutes, I finally called the Tour Company to find that he had no confirmation from Viator that we were coming, and was not expecting us. He recovered quickly and arrived within 30 minutes and the tour got under way. Initially there was a great deal of tension and consternation in the air, but once we put that aside, we had a great tour, with an up-close view of Mt Etna, a fantastic lunch and wine tasting at a local winery, and a stop at Taormina. We got to do everything we had expected and learned a lot from Giuseppe despite the "rough start". To specifically address the lack of communication and verification on Viator's part, this tour was booked and paid for in April, 2019 for a November tour date. Despite multiple attempts by the tour company to send messages to me through Viator, nothing ever reached me. In retrospect, I should have checked myself, but I assumed that a confirmed and paid tour would receive better Customer Service from Viator. I received routed communications from other tour companies through Viator on this cruise, but in this case, the tour was almost a disaster because Viator dropped the ball and failed to pass on communication requests. Really dinged my confidence in Viator's ability to deliver as promised.
...Read more

All around perfect tour!

realtorleslie
ETNA TOUR & LUNCH in a WINERY with WINE TASTING | Nov 2019
Manuel was on time, knowledgeable and lots if fun! It was our 2nd visit to the Gambino winery and it was just as terrific as the first.
...Read more

reviewer774
ETNA TOUR & LUNCH in a WINERY with WINE TASTING | Nov 2019
Our tour guide Giuseppe was very knowledgeable throughout the day, particularly about Mount Etna and its well worth the visit. We walked up the side of one crater and saw amazing views. We also visited a winery Gambino where the food and wine flowed and was the highlight of the day. We were lucky to have a great guide and nothing was too much so we were free to take our time and relax.
...Read more

Our best day in Taormina

andreaa112016
ETNA TOUR & LUNCH in a WINERY with WINE TASTING | Oct 2019
Giuseppe was reliable, professional, knowledgeable, charming, and a wonderful addition to our day! We could not have planned the day more perfectly. My Etna was a sight to see, the honey farm was a great change of pace, and the winery was fantastic! We were treated like friends at every venue and we thank Giuseppe for a wonderful day in Taormina!
...Read more

Alice R
Ragusa, Modica & Scicli Tour | Oct 2019
Ragusa, Modica and Scicli are beautiful historic cities, well worth visiting. Our driver, Armando, was charming and accommodating. If you have the time, this is a very enjoyable day trip.
...Read more

A fantastic day with our driver Manuel

Excursion145156
Villa Romana Del Casale in Piazza Armerina and Valley Of Temples in Agrigento | Oct 2019
We had a wonderful tour of the Valley of the Temples in Agrigento. Manuel was a wonderful driver and guide. He could not do enough for us. The temples were amazing and are a must see. A private tour is the best way to do this. Thoroughly recommended.
...Read more

richgg
TAORMINA and CASTELMOLA TOUR | Oct 2019
Armando did a great job of getting us up and down the narrow streets and sharing life in Sicily as well as historic sites. Taormina is a nice little town with a Roman amphitheater and plenty of tourist shops and cafes. Castlemole had a nice view, but not really much else up there to do.
...Read more

kas05
PRIVATE TRANSFER from CATANIA to TAORMINA (and VICEVERSA) | Oct 2019
We arranged for a driver from Taormina airport to the apartment we were staying at and then a return to the airport after our stay just so we wouldn't have to try and navigate by ourselves in an area we have never been. Both times we were very impressed with the vehicle, the driver and the service. I would definitely use Viator again for my transportation needs. Both vehicles were Mercedes and were spotless. The drivers were very professional and easy to talk to. There was a bit of a miscommunication on the location to pick us up for our return to the airport, but we were able to easily resolve and the driver was very apologetic. I would highly recommend Viator for anyone looking for transportation.
...Read more

The Best of Sicily

Debra G
TAORMINA and CASTELMOLA TOUR | Sep 2019
We had a wonderful driver named Armando!! Best driver...even in a crazy downpour. Took us where we wanted to go and explained so much along the way as well. Gave us the time we wanted and never rushed us.. wanted us to enjoy the day....and we did! I recommend him highly and had a beautiful day in Sicily!,
...Read more

Micheal M
TAORMINA and CASTELMOLA TOUR | Sep 2019
Our tour of Taormina and Castelmola took our breath away. Our driver/guide Alex was wonderful. He got us to sights along the way and gave us great recommendations on where to go when we were on our own in both towns and also had a bonus stop in Messina. I would highly recomend this small group private tour.
...Read more

Taxi but Not custom tour

SANDRA O
TAORMINA and CASTELMOLA TOUR | Sep 2019
On time, well presented, excellent vehicle. Driver explained while driving. Not a walking guided tour. Loved Castelmola the best. Arrive there first so not crowded. Views are the best. Taormina of course busy. If you want to go into Theater plan for possible long lines to purchase tickets. Allow time for the leisure walk through the town and viewing time in the theater. 1 1/2 -2 hrs total. Driver also took us for a driving tour through Catania. A nice bonus.
...Read more

Best day of our cruze! Sicile, we will be back!

LucieStP
Etna - Taormina - Castelmola | Aug 2019
This tour is the best one for sure! The ETNA is an absolute must see and we fell in love with Castelmola... Our guide, Armando, was very helpful, answered all our question about the culture, the history of Sicile and made everything possible to please us. Even found a nice typical italian restaurant for us for lunch. I highly recommend this tour and the driver also!
...Read more

rhondaa485
PRIVATE TRANSFER from TAORMINA to PALERMO (and VICEVERSA) | Jul 2019
Driver was knowledgeable, friendly, and spoke English well. Enjoyed the drive and the seaside town of Cefalu.
...Read more

Picked up from the airport

lvaraly
TRANSFER from CATANIA AIRPORT to Catania Center (and VICEVERSA) | Jul 2019
Pick up was a little late but our plane was late too so they may have been waiting for us previously and then had to come back to get us. The driver did not speak English but was friendly.
...Read more
|
Reserve Now & Pay Later
We'll reserve your spot today, and you can cancel up to two days before your experience without making a payment. Secure your spot with ease, stay flexible, and never miss out.
How it works
Find your experience
Choose the experience you want knowing you can secure your spot without being locked in.
Make a reservation
Reserve now and pay later to secure your spot, commitment-free.
Choose when to pay
Come back to pay once your plans are set, or let auto-pay kick in two days before your experience.
Enjoy your experience
Now you're all set! Have a great time.
Frequently Asked Questions  | Terms & Conditions
Reserve Now & Pay Later
Secure your must-do activities without being locked in
Learn More