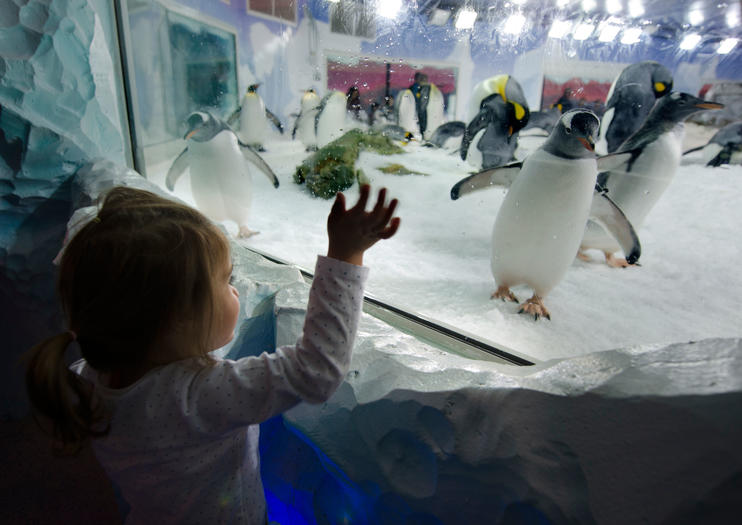 On the coast a few minutes outside Auckland, New Zealand, Kelly Tarlton’s SEA LIFE® Aquarium is the pioneering aquarium that originated curved-glass viewing containers and conveyor belts that move you along. At this family-friendly stop, visitors can see tropical fish, sea turtles, sharks, and two species of penguins.
The Basics
Kelly Tarlton’s (as the aquarium is commonly known in New Zealand) was founded by the renowned Kiwi archaeologist and diver of the same name. An enormous variety of marine life and birds live here, including stingrays, turtles, octopuses, venomous fish such as pufferfish and stonefish, and king and gentoo penguins. For an addition fee, visitors can snorkel with the fish, swim with sharks or stingrays, or ride the Antarctic Snowcat snowmobile to see the penguins. Kelly Tarlton’s also plays an important conservation role, as it has New Zealand’s only turtle-rescue center.
While the aquarium can be visited alone, many travelers like to combine a stop here with other attractions on the Auckland Explorer Bus, a hop-on hop-off service. It’s at Mission Bay, so can be combined with a relaxing time at the beach or at the restaurants in the seaside suburb.
Things to Know Before You Go
How to Get There
Kelly Tarlton’s is located at Mission Bay, about 4 miles (6.3 kilometers) from central Auckland. It’s easy to drive to if you have your own transport. Alternatively, the aquarium runs a free shuttle service from central Auckland (152 Quay Street) that departs on the half hour between 9:30am and 4:20pm.
When to Get There
Kelly Tarlton’s is open daily, with the exception of Christmas Day and Anzac Day (April 25). It’s a popular place to come with kids so can be busy with school groups during the week and with families during the weekends and school holidays. If the weather is fine, it’s a good idea to combine a visit to Kelly Tarlton’s with a stop at nearby Mission Bay Beach.
Visit the Auckland Zoo
Animals lovers might want to follow the aquarium with a stop at the Auckland Zoo, about a 20-minute drive away in Western Springs. The zoo is set in a large park, where animals live in environments that closely mimic their natural habitats. Highlights include cheetahs, African lions, red pandas, servals, and Tasmanian devils.
Address: 23 Tamaki Drive, Orakei, Auckland, New Zealand
Admission: Varies
Read MoreShow Less

54
From Auckland Zoo and the Sky Tower to shopping hot spots and coastal views, Auckland is a sightseer’s dream destination—but reaching the far-flung landmarks on foot takes time and effort. With this hop-on hop-off bus tour, spin through the City of Sails in comfort and hit the sites with ease. Choose a 24- or 48-hour pass, and enjoy the freedom to explore Auckland at your own pace.
...  More
From
US$24,44
From
US$24,44
Learn More

2
Take the plunge and come face-to-face with one of nature’s most effective killing machines. Go beneath the waters of Auckland’s Gulf Harbour in Kelly Tarlton’s “predator tank”, snorkelling safely inside an enclosed mesh-walled cage. Joined by experienced instructors, enjoy an adrenaline-pumping close encounter with several formidable shark species, including tiger sharks, school sharks, Wobbegong sharks and more.
...  More
From
US$67,39
From
US$67,39
Learn More

2
Kiwi Guide who knows all the best places to visit. Trained on the history and geology of our beautiful Aotearoa (land of the long white cloud); New Zealand. Your Guide can tailor the 4 hours to suit your personal preferences, likes and dislikes. We can also pick you up and drop you off when it suits you, and where it suits you.
...  More
From
US$188,15
Price varies by group size
From
US$188,15
Price varies by group size
Learn More

2
Kiwi Guide who knows all the best places to visit. Trained on the history and geology of our beautiful Aotearoa (land of the long white cloud); New Zealand. Your Guide can tailor the 5 hours to suit your personal preferences, likes and dislikes. We can also pick you up and drop you off when it suits you, and where it suits you.
...  More
From
US$205,49
Price varies by group size
From
US$205,49
Price varies by group size
Learn More

1
See more of Auckland while riding the fun and eco-friendly Segway on a 1.5-hour tour with live commentary provided by the guide. Get comfortable handling the Segway, then set out along Tamaki Drive, gliding along the waterfront to Mission Bay. Soak in views of Waitemata Harbour, the Hauraki Gulf, Rangitoto Island, and the city skyline, and make regular stops for photo ops.
...  More
From
US$87,28
Price varies by group size
From
US$87,28
Price varies by group size
Learn More

2
Explore the Auckland waterfront the fun and eco-friendly way on a Segway tour that lets you see more of the huge marina in less time. Anyone can learn to ride the self-balancing electric scooters, which zip you along at a quick pace but allow plenty of flexibility to stop for photos of the Auckland Harbour Bridge and other shoreline sights.
...  More
From
US$48,22
Price varies by group size
From
US$48,22
Price varies by group size
Learn More

33
Learn all about Auckland during a comprehensive tour by bus and boat. Start your day with a bus tour of the City of Sails, then continue with a boat cruise on Waitemata Harbour and a visit to the Sky Tower. Take in highlights such as historical buildings in downtown Auckland, the waterfront beaches along Tamaki Drive, and views of the Hauraki Gulf.
...  More
From
US$111,64
From
US$111,64
Learn More

2
Set off on a full day of exploring Auckland with a local guide. The tour is private and fully customizable according to your interests, but some options are: a bush walk, see 1,000-year-old kauri trees, Piha Beach (with its black sand), winery visit, and a city tour. A private car with driver is yours for up to 8 hours.
...  More
From
US$271,47
Price varies by group size
From
US$271,47
Price varies by group size
Learn More

9
Explore Auckland with the benefit of your private guide on this exclusive tour of the city’s highlight. Choose your own adventure: this tour is flexible depending on where you want to explore. Highlights can include a sandy beach at Ladies Bay, Bastion Point, and Cornwall Park. Visit the location of the upcoming 2021 America's Cup, the Auckland War Memorial Museum (Tamaki Paenga Hine), or explore the shops and cafes of Parnell. Your local guide shares the area’s history on this tour tailored to your group's interests.
...  More
From
US$164,93
Price varies by group size
From
US$164,93
Price varies by group size
Learn More

Get to know Auckland’s past and present with day tour of its scenic city highlights on the first day followed by a visit to Hobbiton movie set along with a themed garden entry.
...  More
From
US$475,83
From
US$475,83
Learn More

Experience yourself why the city of sails, our super city Auckland consistently has come in third place in a new survey that ranks the world’s most liveable cities? Combining an opportunity to Sit back and Ride, Quack, Laugh, Splash, and discover Rotorua with amphibious Duck Tours, a once in a lifetime unique adventure along with underground marvel of New Zealand’s wonder
...  More
From
US$475,83
From
US$475,83
Learn More

107
Gain admission to Kelly Tarlton’s SEA LIFE Aquarium at the Auckland waterfront. Discover the underwater magic of the Southern Ocean at more than 30 exhibits and nine themed zones. You can get up close to playful king and gentoo penguins at the Antarctic Encounter, see displays of jellyfish and stingrays, and stroll through the shark tunnel. Upgrade to go shark diving — with or without a cage!
...  More
From
US$25,19
From
US$25,19
Learn More

Things to do near Auckland