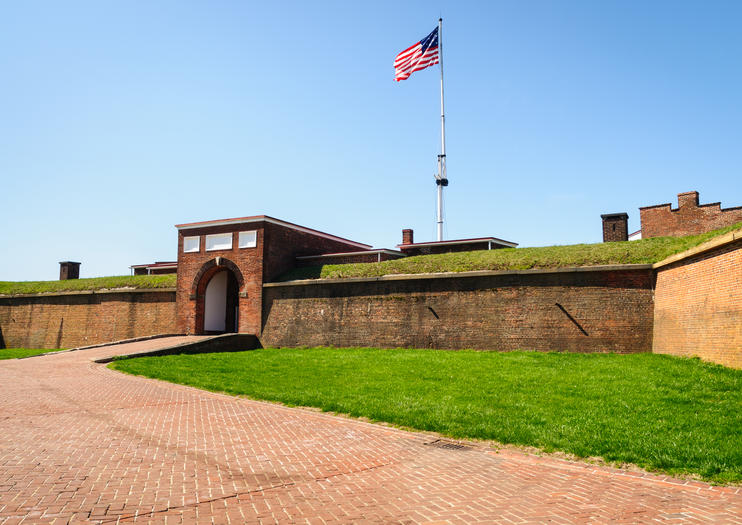 Critical events changed the course of history at Fort McHenry in Baltimore, where soldiers successfully saved the city from British attack in 1812. Inspired by the sight of the American flag waving over the fort after the attack, Francis Scott Key was moved to write the United States’ national anthem.
The Basics
Fort McHenry National Monument and Historic Shrine ranks among Baltimore’s most popular attractions and offers plenty of ways for visitors to experience the historic site. Start in the visitor center to watch an orientation film and explore the exhibits before touring the fort itself.
A full daily lineup of ranger-led programs enhances the experience. Visitors can help rangers unroll, raise, or lower a full-size replica of the Star-Spangled Banner while learning about its history, or hear talks about the Battle of Baltimore or War on the Chesapeake. For something truly special, take a helicopter flight over Baltimore to see the fort from above.
Things to Know Before You Go
How to Get There
The Fort McHenry National Monument and Historic Shrine is 3 miles (5 kilometers) southeast of the Inner Harbor, just off the I-95 Highway. While the easiest way to get there is to drive, it’s also possible to take Bus 1 or a water taxi from several locations around the Inner Harbor.
When to Get There
The best time to visit the fort is during the summer months (June to August), when the lineup of ranger programs expands to include musket and artillery demos and guard drills. The park also hosts some special events throughout the year, including Civil War Weekend in June, Star-Spangled Banner Weekend in September, and Fleet Week in October.
Nearby Historic Attractions
Baltimore isn’t lacking in historical appeal, and visitors will find numerous attractions within a 25-mile (40-kilometer) radius. The Star-Spangled Banner Flag House and Museum offers some context for the Fort McHenry site, while the Maryland Historical Society Museum gives a broader take on regional history. The USS Constellation invites visitors onto the decks of an 18th-century frigate.
Address: 2400 East Fort Avenue, Baltimore 21230, USA
Admission: Varies
Read MoreShow Less

Admire spectacular Baltimore views—and see the city’s top sights from the air—on a helicopter tour. Pick between multiple flight durations to suit your preferences, and upgrade for a private experience. Then, take to the skies, where you can spot highlights like Fort McHenry, the U.S. Naval Academy, Oriole Park at Camden Yards, and more. Your tour also includes dinner at either Ruth's Chris Steak House or The Capital Grille.
...  More
From
US$314,94
From
US$314,94
Learn More

Get to know the city of Baltimore with a private tour guide to share the city’s history, culture, and political highlights. Perfect for travelers who want to maximize their time in Baltimore, this tour provides an in-depth introduction to the city as well as insider tips for things to see and do after the tour. Plus, private transportation means you don’t have to waste time waiting on other travelers.
...  More
From
US$295,00
per group
From
US$295,00
per group
Learn More

Things to do near Baltimore