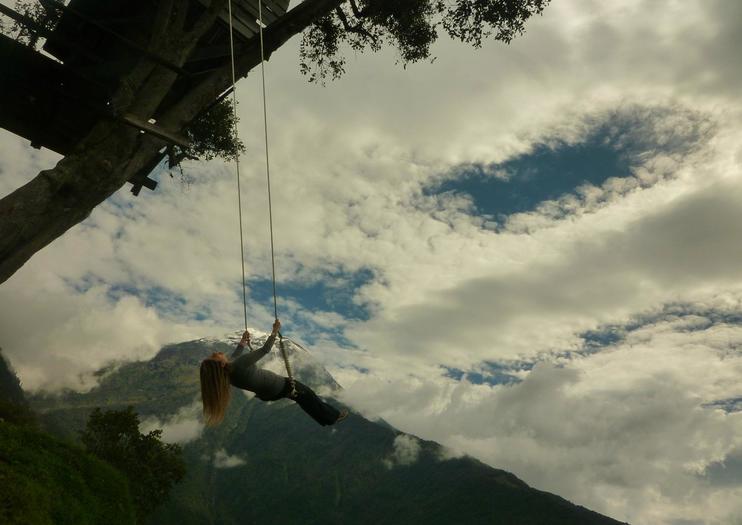 In the Ecuadorian wilderness just outside Baños, Casa del Arbol Swing is a seismic monitoring station that has capitalized on its perfect mountaintop location next to the Tungurahua Volcano by installing a treehouse with a rope swing. The Swing at the End of the World, as it’s often called, offers thrills with an unobstructed view of the volcano.
The Basics
At the Casa del Arbol Swing, you can launch yourself out over a steep drop, about 100 feet (30.5 meters) above a canyon, on nothing but a crude piece of wood. The adrenaline rush is worth it though, as the experience offers extraordinary views of the mountainous landscape and the Tungurahua Volcano. The area around Casa del Arbol is also great for hiking, and there are many other spots where you can avoid the crowds and take in the view.
Some multi-day tours from Quito take in Casa del Arbol and Baños as well as Quilotoa Lagoon (Laguna Quilotoa), Cotopaxi National Park (Parque Nacional Cotopaxi), and more.
Things to Know Before You Go
How to Get There
There are several ways to reach Casa del Arbol Swing, located about 6 miles (10 kilometers) outside of Baños. Most visitors arrive on foot, by bike, or via public transport—an inexpensive bus makes the trip up the mountain several times a day. You can also hire a taxi or rent a car.
When to Get There
Casa del Arbol Swing can be visited year-round, however the best time to go is from October to March, when rainfall is at its lowest. If you want to avoid the crowds, visit on a weekday and hike or take a taxi at different hours to avoid all the people arriving on the public bus.
Tungurahua Volcano
Casa del Arbol Swing is a seismic monitoring station for the Tungurahua Volcano, one of Ecuador’s most active volcanoes. The rope swing takes you out over the edge of the mountain and it’s about as close as you can get to the volcano, as climbing it is prohibited. On a clear day, you might even see clouds of ash spewing from Tungurahua’s peak and hear it rumbling.
Address: Baños Canton, Ecuador
Read MoreShow Less

21
If you want something personalized, exclusive and unique, then this option is for you, a tour full of adrenaline, nature and beautiful landscapes.
...  More
From
US$41,03
From
US$41,03
Learn More

1
Save 20% with this bundled Baños's Top Attractions Pass. Cross the best of Baños forests ziplining. Let the wonderful water from Baños waterfalls wrap you in their magic with our Canyoning activity, let the power of the plants purify your skin and remove the toxins from it with our Baño de Cajón or relax to a warm beverage at the Cafe del Cielo in the Luna Run Tun hotel with an amazing view. Have unique views in Baños on board a double-decker bus which will take you to Casa del Árbol and Cafe del cielo or take our Ruta de las Cascadas and explore the most beautiful and great waterfalls from Baños.
...  More
From
US$65,21
From
US$65,21
Learn More

10:00 am - CANOPY The zip line, also called canopy is an adventure sport that consists of sliding down a steel cable from one point to another of lower height. We perform it on a 800 meter round cable and one 500 meter round cable at a height of 300 meters above a beautiful waterfall called EL MANTO DEL NOVIA 16:00 PM.- NIGHT TOURS We traveled like this the Mirador de bellavista where we can observe the whole city of Baños at night we served a delicious canelazo and we heard something of the history of Baños and we returned
...  More
From
US$34,99
From
US$34,99
Learn More

The Tree House - Swing of the End of the World and more ... Private Tours For 3 pax

Places to visit: 1. Tree House 2. Swing of the end of the world 3. Extreme swing 4. Bellavista Viewpoint 5. Volcanic Cinnamon The Tree House in Baños Ecuador at 2660 meters high is a viewpoint where you get an excellent view of the imposing Tungurahua volcano.
...  More
From
US$49,99
From
US$49,99
Learn More

5
Discover the natural beauty of Ecuador with this three-day private tour from Quito. Travel into the Andes Mountains and along the scenic route known as the Avenue of the Volcanoes. Visit several landmarks including the Cotopaxi National Park, Quilotoa Volcano, and the Pailon del Diablo waterfall. Round-trip transportation from Quito is included.
...  More
From
US$778,85
Price varies by group size
From
US$778,85
Price varies by group size
Learn More

THIS PRICE IS PER PERSON - We rent all types of VEHICLE for any road inside or outside the city at good prices. We have the best TOURIST ROUTES in the country CASA DE ARBOL, ANTENAS, NAHUAZO, BELLAVISTA, ROUTE OF THE WATERFALLS TO PAILON DE DIABLO, PONDA SKIRTS OF THE VOLCANO TUNGURAHUA LLANGANATES ETC. The best part of a trip is when you return healthy, unless you are satisfied with your home.
...  More
From
US$34,99
From
US$34,99
Learn More

The best Pailon of Diablo and Tree House Tour.

9
It is the best relax tour combining city mountains waterfalls with incredible falls surrounded by nature in a unique and spectacular environment To book this tour minimum 2 people maximum 10 If you are a group of 10 people or more please write directly to our company to the email and receive special discounts.
...  More
From
US$40,50
From
US$40,50
Learn More

Treehouse Places to visit: 1. Tree House 2. Swing of the end of the world 3. Extreme swing 4. Bellavista Viewpoint 5. Volcanic Cinnamon The Tree House in Baños Ecuador at 2660 meters high is a viewpoint where you get an excellent view of the imposing Tungurahua volcano. Discover here, the Swing End of the World, Baños Ecuador The Famous Swing End of the World, Admiring the Ecuadorian Andes from this place will be an experience that will wrap your senses and where you can enjoy the enchanting landscapes. You have other activities to enjoy such as canopy (zip line), walks around the place, balancing on sticks, or taste a delicious appetizer typical of the Ecuadorian Andes.
...  More
From
US$9,99
From
US$9,99
Learn More

Things to do near Baños