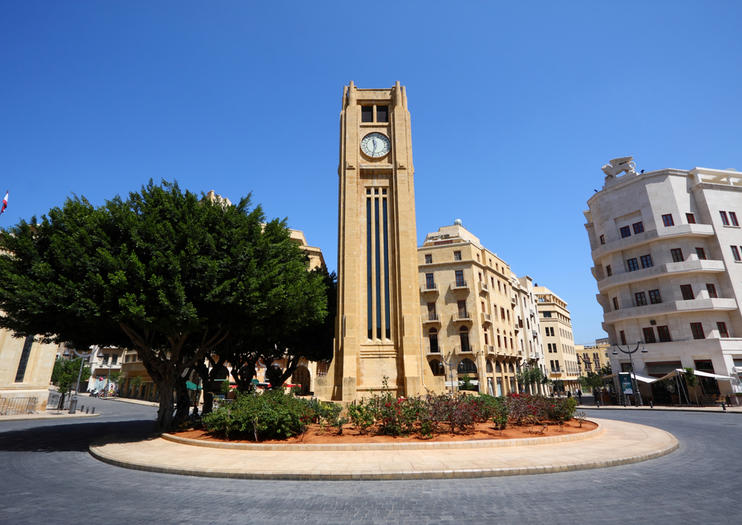 From Roman relics to rooftop bars, from elegant mosques to designer stores, from bullet-pocked ruins to glitzy restaurants, downtown Beirut (Beirut Central District) is a study in contrasts. Archaeological museums, art galleries, and Mediterranean vistas offer much, but for many the focus will remain on food, drink, and fun in this sophisticated and diverse city.
The Basics
Compact and attractive, downtown Beirut is best experienced on foot, whether as part of an organized walking tour or food tour or as a self-guided meanderer. Even by Middle Eastern standards, Lebanon has crazy traffic, and driving in Beirut is not for the faint-hearted. Downtown Beirut tours typically visit Nejmeh Square, Martyr’s Square, the Roman baths, and at least one museum, perhaps the National Museum of Beirut with its Phoenician art and artifacts.
Things to Know Before You Go
How to Get There
Downtown Beirut is about 5 miles (8 kilometers) north of Beirut Rafic Hariri International Airport. Driving in Beirut is stressful and dangerous, and the major international ride-hailing apps have yet to come to Lebanon, so most opt to arrange airport pickup, book a private driver/guide, or join an organized tour.
When to Get There
If food, drink, and socializing are your interests, then a balmy summer evening (June through mid-September) is the perfect time to explore downtown Beirut, with the rooftops in full swing. Lebanon follows the Christian working week, so the biggest nights are Friday and Saturday. If your interests are cultural, visit during the day, and be aware that many sights close on Mondays.
What to Eat in Downtown Beirut
Lebanese cuisine has traveled the world with good reason, although downtown Beirut’s cosmopolitan dining and drinking scene is not limited to local fare alone. Besides Middle Eastern signatures such as falafel, hummus, kofte, and shawarma, seek out the cheesy breakfast known as manoushe, savor labneh soft cheese and spicy Lebanese sausages, and be sure to try some local wine.
Address: Lebanon
Read MoreShow Less

Things to do near Beirut