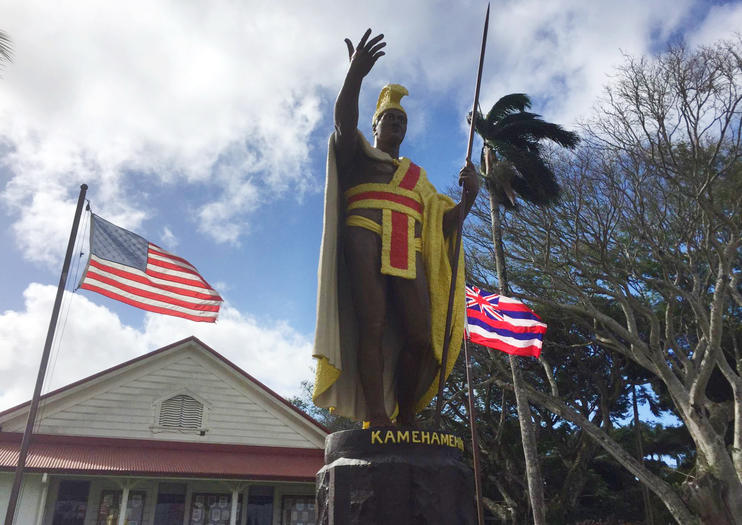 A nine-foot-tall golden-helmeted and spear-wielding bronze depiction of King Kamehameha the Great stands on the North Kohala Civic Center lawn in the tiny town of Kapaau. Though there are similar statues honoring the King throughout the state—including notably in Hilo and fronting the State Supreme Court in Honolulu—this site is perhaps the most significant to the king’s own story: He was born not far from here in 1758, and lived his first few years in hiding deep within a nearby valley where he was safe from battling tribal factions. Kamehameha would later prove his strength, acquiring each of the Islands for the Kingdom of Hawaii by 1810.
The statue, originally intended for a site in Honolulu and constructed in Europe, took several years to make. However, the ship transporting it to Hawaii wrecked in a storm near the Falkland Islands and the heavy sculpture sank to the bottom of the sea. Insurance money was used to quickly replace the missing statue with an even taller one, and that arrived in Honolulu in 1883 where it still stands today. Meanwhile, entrepreneurial fishermen lifted the original and sold it back to the Kingdom of Hawaii for a bargain price. Seeking a spot for the ill-fated statue, the state decided to place the original commissioned bronze here. Each June 11th—the state holiday honoring Kamehameha—all statues of the King, including this one, are draped in community-strung floral lei to celebrate his legacy.

It’s hard to miss the King Kamehameha statue when driving through Kapaau along Akoni Pule Highway. After the town of Hawi, it’s on your right when driving east along the main drag through the northern tip of the Island. A small lot behind the Civic Center has metered parking. The cleverly named King’s View Café across the street (stop in for sandwiches, pizza or ice cream) will point you in the right direction if you happen to be looking the wrong way.
Address: Akoni Pule Hwy, Kapaau, Hawaii, USA 96755, USA
Read MoreShow Less

3
Skip the tour bus and explore the Big Island on your own with this self-guided audio GPS touring app. Follow a short drive around the Big Island's Kohala Coast, traveling along the lush coastline, across tree-lined rolling hills, and down the scenic Kohala Mountain road toward Waimea Town. The app offers turn-by-turn directions and information on what to do and see.
...  More
From
US$10,66
per group
From
US$10,66
per group
Learn More

17
Discover the gardens, scenic wonders, and tasty treats of Hilo on a half-day group shore excursion. This tour is perfect for travelers who want to see it all, but are short on time. Comfortable transportation takes you from port to the city's most noteworthy natural attractions, including Rainbow Falls, Kilauea Crater and the Steam Vents. Amateur botanists are sure to enjoy visits to the Japanese style Liliuokalani and Atasuka Orchid Gardens.
...  More
From
US$109,00
From
US$109,00
Learn More

11
Our Big Island mobile app features five audio tours and you'll get all of them when you purchase the Big Island Tour Bundle. Here’s what’s included in the Big Island Tour Bundle: - Hawaii Volcanoes National Park Tour - Kona Big Kahuna Loop - North Island Jungle Adventure Loop - South Island Epic Coastal Journey - Kohala Coast and Backcountry Tour Each tour uses GPS to give you turn-by-turn directions to popular sites and local gems with stories and music along the way. The audio tours play automatically using your location to give you on-the-spot information. WHY SHAKA GUIDE? ✅ Tours never expire. ✅ Tour work offline. No data needed. ✅ Reliable GPS directions. ✅ A guided tour for a fraction of the price. ✅ Save time planning! We’ve done the work for you. ✅ Your vacation, your terms — freedom to stop and go as you please. ✅ The #1-rated travel app for Big Island. ✅ Listen to interesting stories and Hawaiian music!
...  More
From
US$21,32
per group
From
US$21,32
per group
Learn More

1
Our flexibility and accommodating style set Anuenue Rainbow Tours apart. We tailor each tour to the desires of the group – where we go and how long we stay at any stop along the way is up to you. (We've listed only typical attractions and times spent at each; we happily accommodate what you want to do.) Your attentive tour guide will point out features along the way and delight you with her knowledge of local culture and history. Your guide is a 38-year resident of the island with a degree in Hawai'ian culture and history, a passion for sharing her love of the island, a great sense of adventure, and an abiding aloha spirit. Our air-conditioned Honda Odyssey comfortably accommodates 2 to 7 guests as we traverse the beautiful Island of Hawai’i and experience the sights, sounds and flavors of this incomparable tropical paradise. We are committed to delivering an excellent customer experience! PLEASE NOTE: Your $75 payment through Trip Advisor covers the 1st hour ONLY, as time is flexible.
...  More
From
US$80,00
per group
From
US$80,00
per group
Learn More

2
Capture astonishing landscapes through your camera lens on this photography tour of the Big Island. Depart in the afternoon for the Kohala Coast, with scenic photo stops at Lapakahi State Historical Park and Pololu Valley Lookout, to name a few. This guided adventure includes use of a tripod so you can focus on the enchanting sunset and twinkling stars of the night sky.
...  More
From
US$197,39
From
US$197,39
Learn More

Things to do near Big Island of Hawaii

Recommended for Big Island of Hawaii