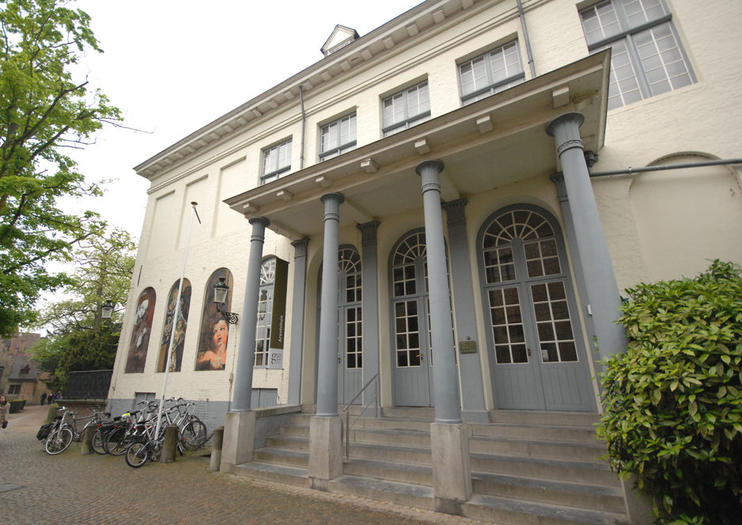 Set back from a main street in a small park behind a medieval gate, the Groeningemuseum is one of the finest art museums in the country. It holds a collection that covers around 600 years of Flemish and Belgian painting, from the 14th through the 20th century, with 11 rooms arranged in chronological order.
The Basics
The Groeningemuseum is often overlooked by visitors to Bruges, which is a shame given that it houses works by some of the most revered artists in European history. Here you’ll find pieces by artists the likes of Jan van Eyck, Rogier van der Weyden, and Hugo van der Goes, along with Hieronymus Bosch’s The Last Judgement. The museum is also home to many pieces by Gerard David, including The Judgment of Cambyses, which depicts the corrupt Persian judge Sisamnes being flayed alive.
Things to Know Before You Go
How to Get There
The Groeningemuseum is situated in the heart of Bruges, just east of the Bonifacius Bridge. It’s close to the canalside flea market, about a 6-minute walk from both the Markt and the Burg. Many local buses stop nearby.
When to Get There
The Groeningemuseum is open Tuesday through Sunday from 9:30am to 5pm, except on Christmas and New Year's Day. Special events and lectures are held here throughout the year, but they are often conducted in Dutch. Unlike many European art museums, the Groeningemuseum does not suffer from large crowds, even in the peak summer tourist season.
Jan van Eyck’s Madonna with Canon Van der Paele
One of the most famous pieces in the museum is Jan van Eyck’s Madonna with Canon Van der Paele. Completed in 1436, this piece is celebrated for its fine detailing and the use of multiple layers of oil and varnish to achieve texture and depth. It’s considered one of the 15th-century Flemish master’s most ambitious works.
Address: Dijver 12 8000, Bruges, Belgium
Admission: Varies
Read MoreShow Less

3 Tours and Activities to Experience Groeningemuseum

54
Avoid crowds and enjoy a more enriching experience of Bruges than is typically offered by group tours. This private walking tour is exclusively for your party so, as you explore the city's sights, you'll have ample opportunity to talk with your guide and learn all about the city's intriguing history.
...  More
From
US$88,79
Price varies by group size
From
US$88,79
Price varies by group size
Learn More

7
Instead of a typical Bruges tour based on a list of landmarks, pair up with a Lokafyer guide for a private walking tour that’s a new concept in travel. From a pre-tour phone consultation to the walking tour itself, it’s an experience that’s tailored to your interests, whether you’re checking out historic neighborhoods, shopping for souvenirs, or looking for restaurants where locals actually hang out.
...  More
From
US$35,51
Price varies by group size
From
US$35,51
Price varies by group size
Learn More

117
Walk around Bruges with a local guide, explore the historic centre and travel back in time to the golden days of Bruges. Our guide will tell you interesting facts and stories of love, glory and fortune, but also of intrigue, war and conflict. He or she can also advise you on where to eat and where to drink during your stay. By the end of the tour you'll know more than a local!
...  More
From
US$1,19
From
US$1,19
Learn More

Things to do near Bruges