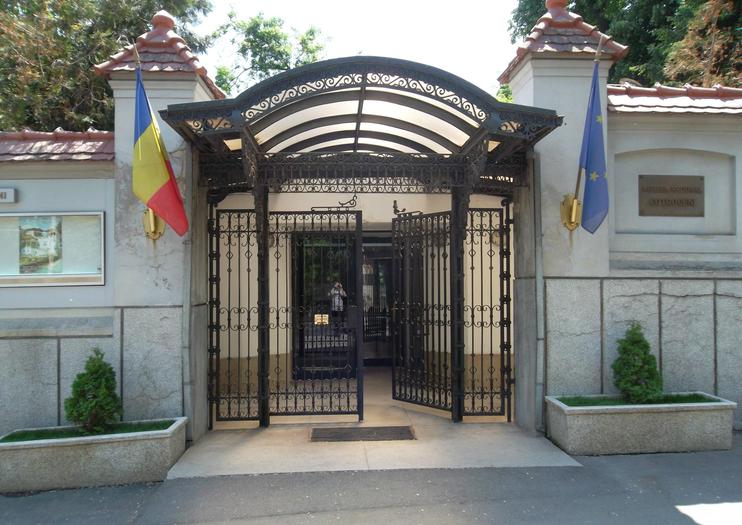 Cotroceni Palace in Bucharest is the headquarters and residence of the Romanian president, as well as home to the National Cotroceni Museum. The original palace served as the residence of Romanian rulers until the end of the 19th century, at which time a larger palace was commissioned by King Carol I. Most of the palace had to be rebuilt after an earthquake struck in 1977. Adjacent to the palace is the Cotroceni Garden, one of the major public gardens in the city which dates back to the 1850s.
The National Cotroceni Museum collection features more than 20,000 objects, divided into several different collections. Highlights include 18th and 19th century religious arts; a collection of Romanian paintings from the 19th century to the present; 18th and 19th century paintings from German, Austrian, French and Belgian artists; sculptures from both Romanian and European sculptors; drawings, watercolors and engravings from the 19th and 20th centuries; and decorative arts, including ceramics, glass, metals and textiles.

The Cotroceni Palace is accessible from the Politehnica or Eroilor Metro stations. Tours of the palace are available in English, French, Italian and Spanish. The 60 minute version costs 35 lei and includes the Cotroceni Church and the first and second floors of the palace. The 90 minute tour costs 40 lei and adds in the cellar. Tours must be booked in advance. Photo fees are charged both for cell phones (5 lei) and cameras (20 lei)
Address: Bulevardul Geniului, nr. 1, Bucharest, Romania
Hours: Museum and temporary exhibitions open Tues-Sun 9:30am-5:30pm (last entrance at 4:30). Cotroceni Church open Wed-Sat 9:30am-4pm and Sun 9am-2pm.
Admission: By tour only, 35-40 lei
Read MoreShow Less

Visiting Cotroceni Palace is , no doubt , an unique experience while visiting the Romanian capital city. With a history of more then three centuries Cotroceni hill is waiting all visitors to discover its secrets following our experts guides.
...  More
From
US$46,86
From
US$46,86
Learn More

Spend a half-day exploring Bucharest's La Belle Epoque history with a flexible itinerary and personalized attention on this private tour. With a guide dedicated to just you and your party, you'll get in-depth commentary tailored to your interests as you travel. Highlights include the old town Lipscani, Victoriei Avenue, Cotroceni Palace, and the Romanian Athanaeum, among others.
...  More
From
US$123,25
Price varies by group size
From
US$123,25
Price varies by group size
Learn More

Red Patrol Bucharest of the Contrasts Tour with Dacia

3
The tour takes you in a ride with the Dacia from one side to the other of Bucharest in a search to discover the contrasting city of Europe: a mixture of the belle epoque of the 19th h and 20th century way of living and the ’70s Eastern Socialist era. Our Dacias takes you to 3 different Bucharest quarters: • Cotroceni quarter, the amazing residential villa quarter of Bucharest where the 19th century and present bourgeoisie live. See the Cotroceni Presidential Palace, the Military Academy Building, the Botanical Garden or the villas. • Drumul Taberei quarter, where the commoners live, built from the 60’s. See the huge communist blocks of flats, the peasant market or the Orthodox churches of the average Romanians or the former factories that now became shopping malls! • Ferentari quarter, the most photographic & contrasting place of Bucharest known as the “city Machala “a place with bad fame, high poverty and ghetto style buildings. A memorable ride with a fully restored Dacia!
...  More
From
US$115,35
Price varies by group size
From
US$115,35
Price varies by group size
Learn More

The most beautiful palaces in Bucharest

Bucharest is home to some magnificent, impressive looking palaces. These imposing architectural gems are now home to the finest and most interesting museums, public or private institutions. My architectural tour will give you a taste of what was Bucharest more than 100 years ago by visiting the most important palaces and historical highlights. You will discover the architecture and the charm of these palaces that most locals don’t even know they exist. I will show you 15 palaces with different architecture, history and legends. I do not want to spoil your enthusiasm and curiosity, but I can assure you will the discover fantastic stories about kings and princes, landowners and the city aristocrats. From Auschnitt and Elisabeta Palace to the Royal and Parliament Palace, I am happy to guide you on the path of our city's palaces. Also, I will be your personal paparazzi. I love photography, so it's my pleasure to take you the most Instagrammable pictures.
...  More
From
US$72,10
From
US$72,10
Learn More

2
We are proud to take you on a private tour of the most famous landmarks located in central Bucharest, along with a certified guid. You will be able to take unique pictures and learn Bucharest's history, one building at a time. Also feel free to ask questions.
...  More
From
US$67,80
Price varies by group size
From
US$67,80
Price varies by group size
Learn More

Choose this tour if you wish to combine relaxation with a great itinerary which allows you to discover some of the best attractions of Transylvania. You will get to see the famous Bran Castle, Peles Castle, Rasnov Fortress, see the Bear Sanctuary at Zarnesti, beautiful Brasov, and get to relax in the beautiful mountain resort Poiana Brasov. Not to be missed by travel enthusiasts and first time visitors!
...  More
From
US$394,38
From
US$394,38
Learn More

The Cotroceni Palace, headquarters of The Presidential Administration, is located in an area with a history of over three hundred years. Between 1679 - 1681, to the west of Bucharest, on these lands, on the Cotroceni hill, Prince Serban Cantacuzino founded a monastery, clearing a densely wooded area of the Vlăsiei Woods. Remarkable within this ensemble from the times of Serban Cantacuzino were the "Assumption of the Holy Virgin" church and the magnificent princely palace, built in the Baroque style, specific to the Western Europe of those days. In terms of architecture, the ensemble of Cotroceni has known several key moments: the first is related to the name of the founder Serban Cantacuzino (1678 - 1688).Important historical events took place at Cotroceni. In 1821, Tudor Vladimirescu, the leader of the rebellion, decided to camp here, Cotroceni becoming the center of the revolution.
...  More
From
US$96,13
Price varies by group size
From
US$96,13
Price varies by group size
Learn More

7-Day Private Tour of Romania and Serbia from Bucharest

Visit two history-packed countries on a single, multi-day trip on this double-duty guided tour of Romania and Serbia. Cover traditional and modern sides to each location, from fortified medieval sites to Communist landmarks. Highlights include a scenic boat ride on the Danube, a tour of Bran Castle, belonging to the man who inspired the Dracula legend, and a visit to the Sighisoara Citadel, inhabited for centuries.
...  More
From
US$554,59
From
US$554,59
Learn More

Things to do near Bucharest