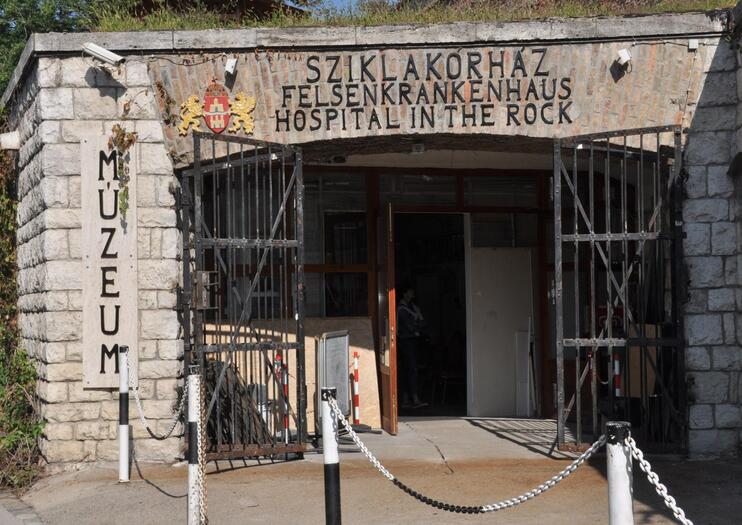 Overview
Deep in the rock beneath Buda Castle, this former hospital played a central role in both the Siege of Budapest and the Hungarian Uprising, before being repurposed as a nuclear bunker during the early Cold War. Today, the Hospital in the Rock functions as a museum, offering insight into the hidden history of Hungary’s capital.

The Basics
The Hospital in the Rock Nuclear Bunker Museum (Sziklakórház Atombunker Múzeum) is a common stop on Budapest tours, often checked off with its Buda Castle and Fisherman’s Bastion neighbors. The hospital’s interior can be accessed only with a museum guide. Some multi-attraction packages, such as certain hop-on hop-off tours, include discounted entry to the museum, helping to optimize your vacation time and budget.

Things to Know Before You Go
How to Get There
Situated in the caves below Buda Hill, the museum can be reached via elevator or steps directly from Buda Castle. Bus 16 stops nearby, as do regular hop-on hop-off services. If you’re going without a guide, make sure you have a map, as the entrance can be tricky to locate.

When to Get There
The Hospital in the Rock Nuclear Bunker Museum is typically open daily (except public holidays). English-language tours usually take place every hour, on the hour—going up to every half hour during the May-to-October peak season. The museum participates in Budapest’s Night of Museums initiative, when cultural institutions open after dark on Midsummer’s Eve.

Budapest Card
If you’ll be doing a lot of city sightseeing, consider snagging a Budapest Card—a pass that includes free or discounted entry to most of Budapest’s top attractions, as well as unlimited use of public transit, free walking tours, and all sorts of deals. Choose from 24-, 48-, and 72-hour validity periods to suit your schedule, and easily experience all the city has to offer.
Address: I. Lovas út 4/c, Budapest, Central Hungary 1012, Hungary
Admission: 4,000 Ft
Read MoreShow Less

183
Discover Budapest with a 24, 48, 72, 96 or 120-hour Budapest Card, providing discounts, tours and transportation while you explore the city independently. Enjoy free entry to top museums, two complimentary walking tours, admission to the thermal baths and more. Your card also includes discounts at popular restaurants, free public transportation and a guidebook with helpful information about the included services.
…More
From
US$26,64
From
US$26,64
Gear/equipment sanitized between use
Regular temperature checks for staff
Paid stay-at-home policy for staff with symptoms
Learn More
Taking safety measures

90
Round up Budapest’s sights with ease and learn to ride a Segway personal transporter on a private city Segway tour. Choose a departure time to fit your schedule and cruise around Buda and Pest’s landmarks without the inconvenience of walking, catching buses, or jostling with others in a large tour group. Ideal for travelers seeking a quick and fun overview of the city, the tour includes training, equipment, and photos.
…More
From
US$71,45
Price varies by group size
From
US$71,45
Price varies by group size
Hand sanitizer available to travelers and staff
Social distancing enforced throughout experience
Gear/equipment sanitized between use
Learn More
Taking safety measures

16
Budapest’s UNESCO-listed landmarks and Renaissance monuments should be top of the itinerary for first-time visitors, but a private guide means you can tailor your tour to suit your interests. On this 4-hour tour, visit Heroes Square, the Great Synagogue, and the Jewish Quarter; walk over the famous Chain Bridge; sample traditional Jewish pastries; and explore the city’s vibrant neighborhoods.
…More
From
US$36,33
Price varies by group size
From
US$36,33
Price varies by group size
Face masks required for travelers in public areas
Face masks required for guides in public areas
Social distancing enforced throughout experience
Learn More
Taking safety measures

Walk in Buda with Hospital in the Rock Underground Cave Visit

A walking tour to discover the famous Buda Castle District. Admire the main places of interest from the Matthias Church to the Royal Palace and also explore the underground history going down to the catacombs of the Hospital in the Rock.
…More
From
US$34,52
Price varies by group size
From
US$34,52
Price varies by group size
Hand sanitizer available to travelers and staff
Social distancing enforced throughout experience
Guides required to regularly wash hands
Learn More
Taking safety measures

40
Discover Budapest’s best-known attractions all in one tour, and speed around the city with ease, when you explore via Segway. Meet your guide at a time that works best for you—this private tour can be tailored to fit your schedule—and get acquainted with your Segway. Once you feel comfortable, set off and explore. You’ll discover the UNESCO-listed Banks of the Danube, will admire highlights of the Budapest Castle District, will see the Hungarian Parliament Building, will glide past St. Stephen’s Basilica, and much more.
…More
From
US$71,45
From
US$71,45
Hand sanitizer available to travelers and staff
Social distancing enforced throughout experience
Gear/equipment sanitized between use
Learn More
Taking safety measures

41
Explore the beautiful city of Budapest on a private Segway tour. Discover the city’s main highlights such as Fisherman’s Bastion, the Parliament, the Opera House, St. Stephen’s Basilica and more as you cruise through the streets with ease. Stop along the way for photo opportunities and learn about each location from your informative guide during this 3-hour tour.
…More
From
US$90,83
Price varies by group size
From
US$90,83
Price varies by group size
Hand sanitizer available to travelers and staff
Social distancing enforced throughout experience
Gear/equipment sanitized between use
Learn More
Taking safety measures

Things to do near Budapest