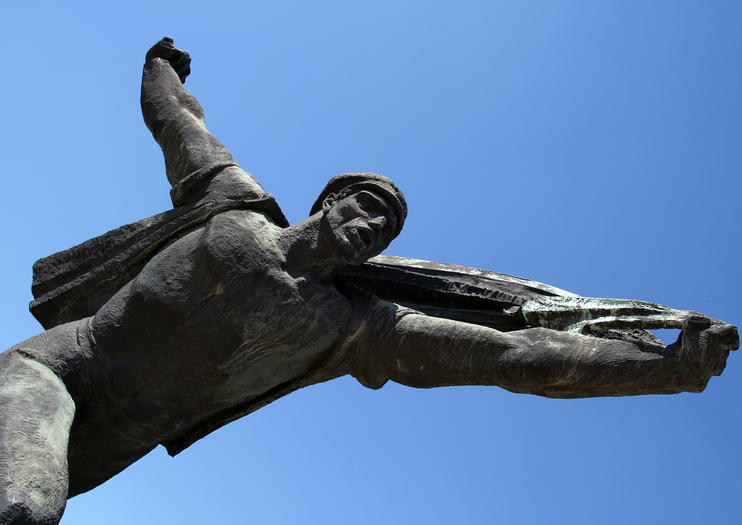 Following WWII, Budapest was firmly brought under Soviet occupation and only escaped the harsh embrace of Communism in 1989, when the Iron Curtain came down across Europe and democracy was (largely) restored.

Under Communism, scores of statues celebrating Marx, Lenin and Engels were erected as propaganda tools around Budapest. They were all uniformly monumental in scale, made out of concrete and downright ugly, and were soon joined by equally vast statues of Hungarian Communist leaders Béla Kun and Arpád Szakasits as well as gigantic allegorical monuments to Soviet heroism.

When the Soviet Union finally collapsed in 1989 and Hungary began to enjoy its first vestiges of independence, these monolithic reminders of years of suppression were torn down and carted off to Memento Park on the city’s south-west outskirts. Here they are displayed as a grim reminder of Communism and the Cold War along with an old Trabant and a half-destroyed statue of Lenin, which was desecrated in the 1956 rebellion.

The park is dominated by the 20-foot (six-m) statue of a wild-eyed liberation soldier, arms flung wide, hammer and sickle in his hand and gun slung around his neck; this once stood on the top of Gellért Hill and was seen as a symbol of Budapest’s repression.

183
Discover Budapest with a 24, 48, 72, 96 or 120-hour Budapest Card, providing discounts, tours and transportation while you explore the city independently. Enjoy free entry to top museums, two complimentary walking tours, admission to the thermal baths and more. Your card also includes discounts at popular restaurants, free public transportation and a guidebook with helpful information about the included services.
…More
From
US$26,78
From
US$26,78
Gear/equipment sanitized between use
Regular temperature checks for staff
Paid stay-at-home policy for staff with symptoms
Learn More
Taking safety measures

17
Experience a birds-eye view of Budapest on a thrilling sightseeing flight. You are served a glass of Hungarian sparkling wine before hopping aboard a private, 4-passenger plane to witness spectacular views of the city. Fly over the Parliament Building, Buda Castle, and the famous Chain Bridge, and enjoy aerial views of Fisherman’s Bastion and the statues at Memento Park.
…More
From
US$266,61
Price varies by group size
From
US$266,61
Price varies by group size
Social distancing enforced throughout experience
Regularly sanitized high-traffic areas
Gear/equipment sanitized between use
Learn More
Taking safety measures

Hungary's communist era, 'life in the most merry barrack', private tour by car!

Step back in time to the days of life behind the Iron Curtain on this private tour of Budapest. Learn the story behind the Hungarian Revolution of 1956 and how it was tragically crushed. Visit the Citadella where the story of communism in Hungary began, see the monumental Soviet statues in Memento Park, the memorials of the victims near to the Hungarian Parliament, and the House of Terror. Inside visit of House of Terror Budapest is not included!
…More
From
US$191,05
Price varies by group size
From
US$191,05
Price varies by group size
Face masks provided for travelers
Hand sanitizer available to travelers and staff
Social distancing enforced throughout experience
Learn More
Taking safety measures

Things to do near Budapest