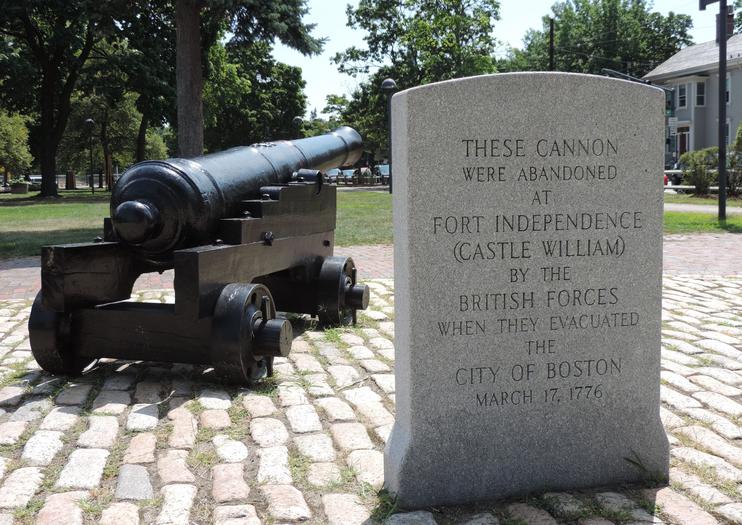 Cambridge Common is a popular green space near Harvard Square where local recreational sports teams play, picnickers gather, and energetic kids run around. On the site where George Washington gathered troops during the Revolutionary War, the park contains historic cannons and plaques that commemorate some of the revolution’s major events.

The Basics
Walking tours of Cambridge typically include a stop at Cambridge Common, a 16-acre (6.5-hectare) park that offers open space for play or relaxation. In addition to the site’s Revolutionary War connection, the park contains other items of historical interest, such as a Civil War memorial with an image of Abraham Lincoln and the names of Massachusetts soldiers and a memorial to the mid-19th-century Irish Famine.

How to Get There
Cambridge Common is located near Harvard Square and next to Harvard University, between Waterhouse Street, Garden Street, and Massachusetts Avenue. To get there by subway (known as the T), take the Red Line to the Harvard stop, which is across the street from Harvard Yard and about a 5-minute walk from Cambridge Common.

When to Get There
The best time to visit Cambridge Common is during the warmer months, when you can sit and people watch or enjoy an outdoor picnic. June to October is the most popular time to travel to Cambridge, so expect to encounter more tourists then, but Cambridge Common is generally less crowded than Harvard Yard.

Harvard Square
Harvard Square refers to the neighborhood surrounding Harvard University as well as its popular public square. The “square” is actually a triangular plaza at the intersection of Massachusetts Avenue, Brattle Street, and John F. Kennedy Street, just south of Cambridge Common. Revolutionary War enthusiasts should stroll down Brattle Street, which was known as Tory Row for its residents’ sympathies in the war, to see the 1700s-era colonial homes.
Address: Waterhouse St and Massachusetts Ave, Cambridge, Massachusetts 02138, USA
Read MoreShow Less

Let’s Roam is the #1 app-led scavenger hunt company. Walk to all the best landmarks and hidden gems, answering trivia questions and solving challenges. Work with your team or compete against them, as you learn new facts and create memorable experiences. Let’s Roam Scavenger Hunts are great as an everyday activity, or for bachelorette parties, birthday parties, corporate team building events and more! Each player chooses an interactive role, with challenges varying by person.
…More
From
US$12,31
From
US$12,31