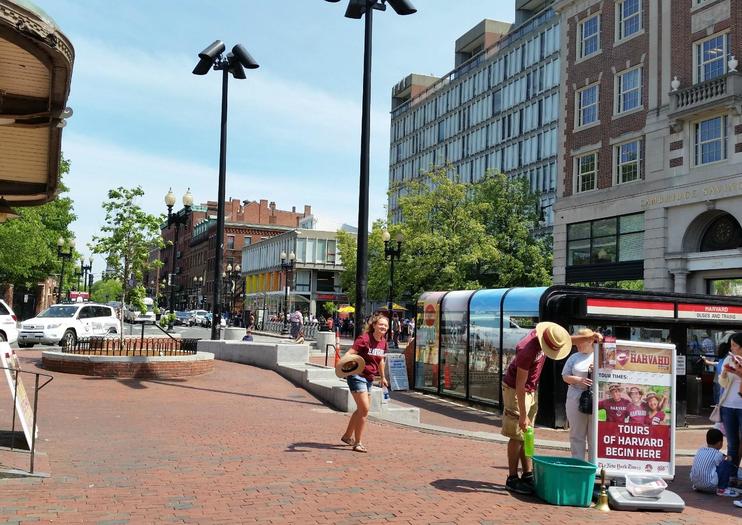 It’s easy to spend an afternoon in Harvard Square, a popular gathering place and a hub for street performers thanks to a lively street scene and close proximity to Harvard University. Travelers will find plenty of local life in this Cambridge neighborhood, as well as restaurants, shopping, an old-school newsstand, and public-art installations.

The Basics
Technically the “square” is a triangular plaza at the intersection of Massachusetts Avenue, Brattle Street, and John F. Kennedy Street, but the term is also used to identify the surrounding neighborhood, which includes Harvard University. Like many college towns, this area is packed with bars, restaurants, cafés, bookstores, and shops, making it the perfect place to people watch in Cambridge. Walking tours are available, and some all-day tours of Boston include a visit to Harvard Square.

How to Get There
Harvard Square is located near the center of Cambridge, Massachusetts, at the intersection of Massachusetts Avenue, Brattle Street, and John F. Kennedy Street. To get there by subway (known as the T), take the Red Line to the Harvard station; several buses also stop nearby. Bluebikes, Boston's bike-share program, has kiosks around the square.

When to Get There
The most popular times to visit the Boston and Cambridge area are the summer, when the weather is warm, and the early fall months, when the foliage is changing colors. Keep in mind that Cambridge will be extra busy during college graduation time, which is typically in May and early June.

John Harvard Statue
For visitors and prospective students alike, the John Harvard Statue is a local touchstone—literally. Tourists can be found rubbing the left toe of the bronze statue for good luck. Located in Harvard Yard, the figure is a symbol of the university and sometimes the target of pranks by students from visiting schools, especially during football season.
Address: 18 Brattle St #352, Cambridge, Massachusetts 02138, USA
Read MoreShow Less

363
For anyone thinking of attending Harvard, or for those who simply want a glimpse of college life at the famous university, this tour is a must. Get an exclusive account from current Harvard students, who provide key insights into the life and times at Cambridge with a theatrical, humorous flair. Check out the old buildings at Harvard Yard and Harvard Square and learn about the school’s storied past. Illustrated map of Harvard Square included. Choose from several departure times throughout the day.
…More
From
US$19,50
From
US$19,50

88
For anyone thinking of attending Harvard, or for those who simply want a glimpse of life at the famous university, this guided tour is a must. Get an exclusive account from Harvard students, who provide key insight into the times at Cambridge. Check out the old buildings at Harvard Yard and Harvard Square and learn about the school’s storied past. After the walking tour, explore the Harvard Museum of Natural History on your own.
…More
From
US$24,99
From
US$24,99

Get a taste for the pleasures of collegiate life during this 2-hour sunset walking tour of historic Harvard Square. Stroll the grounds of the world’s most famous university, soaking up the array of street performers, socializing students and historic haunts that give this iconic college in Cambridge, Massachusetts its unique vibe. During your walk you’ll explore Harvard Yard, walk along colonial Brattle Street and discover centuries-old landmarks like the Old Burial Ground Cemetery. A professional guide is included to help add insight to your walk.
…More
From
US$456,00
per group
From
US$456,00
per group
Face masks required for travelers in public areas
Face masks required for guides in public areas
Social distancing enforced throughout experience
Learn More
Taking safety measures

3
Enjoy this 90-minute, private tour of Harvard University for you and your guests! The tour is completely customizable to fit your group’s needs. Throughout this tour, your informative guide – a current university student – will offer a unique perspective of college life at the famed institution. As you tour the grounds, be entertained by your guide’s stories and Harvard lore – partly scripted and partly shared from personal experience. Learn about the most famous people that attended Harvard, hear historical anecdotes and get an insider’s view on current college life. After a stop at the Plaza, Winthrop Park and Mt Auburn Street in Harvard Square, complete your tour at the Harvard Cooperative Society (COOP), the University’s official bookstore.
…More
From
US$275,25
per group
From
US$275,25
per group