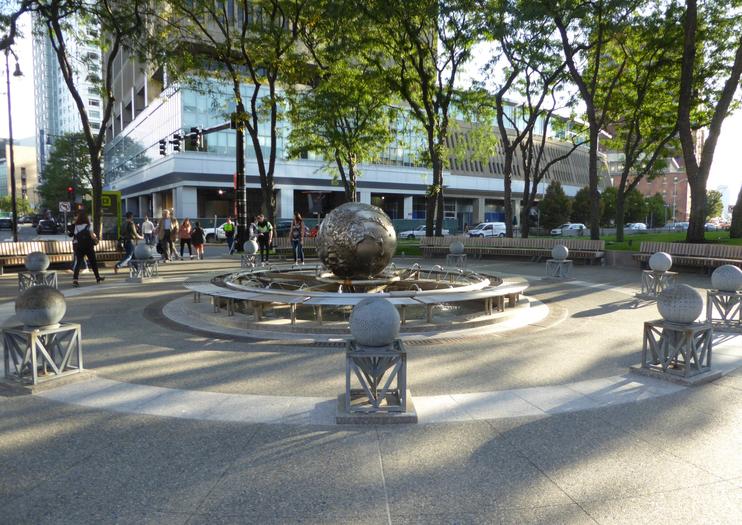 Kendall Square has served as a transit hub for travelers venturing between Boston and Cambridge for centuries: In 1793, it provided the first direct wagon route between these cities. Today tech firms and offshoots of nearby MIT call Kendall Square home, and travelers will find plenty of accommodations, restaurants, and shopping here.

The Basics
Originally a salt marsh, the area developed into a lively industrial hub in the 19th century with distilleries, factories, and the Kendall Boiler and Tank Company, from which the neighborhood got its name. Today, visitors can wander its busy farmers market, rent a canoe or kayak and paddle the Charles River, and tour the Constellation Center. In warmer months, live concerts take place in the early evenings, while wintertime brings an outdoor ice rink. Some guided Cambridge tours include a look at Kendall Square and its history.

How to Get There
Kendall Square is located at the intersection of Main Street, Broadway, Wadsworth Street, and Third Street in Cambridge. The popular business district of the same name is east of Portland Street, northwest of the Charles River, and north of MIT. The Red Line of Boston’s subway, known as the T, stops at the Kendall/MIT station in Kendall Square. The neighborhood is also accessible via buses 68, 85, and CT2.

When to Get There
On Thursdays between June and September, farmers, bakers, and artisans sell their wares at the farmers market in South Plaza. Also during the summer, free concerts take place on Tuesdays and Thursdays in North Plaza. The community ice rink is open from mid-December until mid-March, depending on the weather.

MIT Museum
In 2021, a new 17-story addition to Kendall Square will be the MIT Museum, which is currently located at 265 Massachusetts Avenue and features an array of exhibits ranging from artificial intelligence and holography to robotics. Visitors can also observe demonstrations by faculty and students, as well as participate in on-site workshops and hands-on activities at the museum.
Address: Main Street, Broadway, Wadsworth Street and Third Street, Cambridge, Massachusetts 02142, USA
Read MoreShow Less

14
Walk the quads of the campus that inspired astronauts, Nobel Peace Prize winners, and famed innovators in just about every discipline on a student-led tour of the Massachusetts Institute of Technology (MIT). Get an inside look on what it’s like to attend the prestigious university and hear real stories about what makes MIT special.
…More
From
US$14,99
From
US$14,99