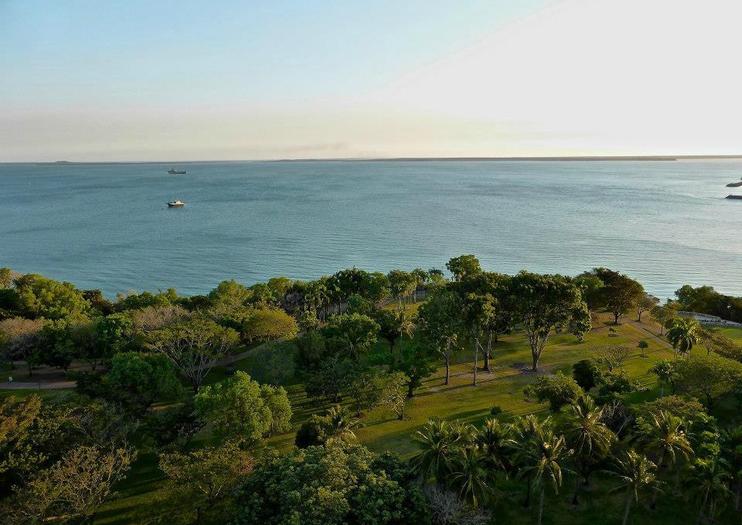 This expansive park runs the length of Darwin’s waterfront, looking down onto the Darwin Harbor and Lameroo Beach.  It stretches south from the Northern Territory Parliament House down to the Doctor’s Gully area. It is a large outdoor space popular for holding local festivals, including May Day and the Darwin Festival, as well as many weddings. It is a great place to simply take a stroll and enjoy the scenery in Darwin, with paths often shaded by tall tropical trees.
The park is also home to several war memorials, including the Cenotaph War Memorial, the Civilian Memorial, and the The USS Peary Memorial (which sunk in the Darwin Harbor.) Memorial plaques commemorate the stories of those who have served their country, both Australians who lost their lives in the Bombing of Darwin and Aboriginal men and women who helped defend the Northern Territory coastline.

Bicentennial Park is located along the Esplanade in the city center of Darwin. It is a short bus ride or walk from the CBD (central business district.)
Address: Esplanade, Darwin NT 0800, Australia
Read MoreShow Less

This self-guided audio tour of Darwin is a great activity for travelers who want the independence of traveling without a guide while also wanting the information and entertainment that a guide provides. Download the audio file and follow the tour to some of the main landmarks of Darwin city, stopping wherever you want. Enjoy historical tales and be immersed in the city and its stories at your own pace.
…More
From
US$15,90
From
US$15,90
Face masks required for travelers in public areas
Learn More
Taking safety measures

26
Get an insider’s perspective on the history and culture of Darwin on this walking tour with a local guide. Hear the background stories to the buildings and monuments that you’d miss if you just walked past them alone. There are many opportunities to stop and take pictures of the must-see sights as well as the more peaceful, hidden corners of central Darwin.
…More
From
US$35,35
From
US$35,35
Hand sanitizer available to travelers and staff
Social distancing enforced throughout experience
Gear/equipment sanitized between use
Learn More
Taking safety measures