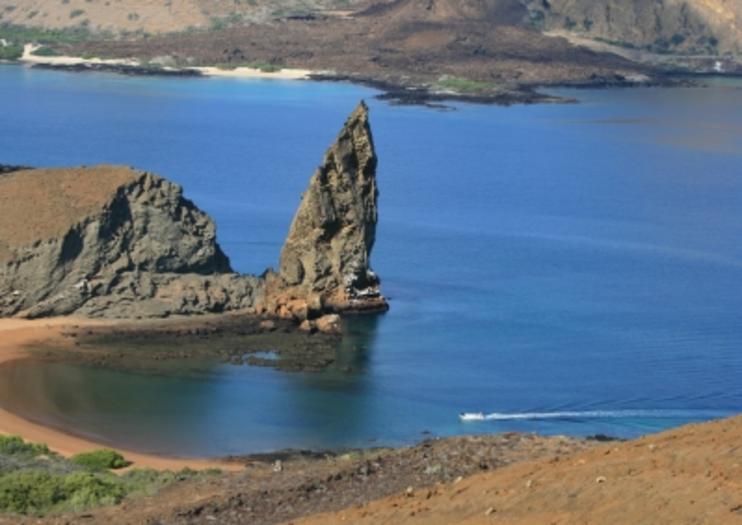 Bartolomé Island, located off the east shore of Sullivan Bay, is a small but beautiful spot most famous for its iconic Pinnacle Rock, which is arguably one of the most recognizable landmarks in the Galapagos. The staggering rock face is an eroded lava formation that was originally created by an underwater volcano.
The Basics
Visitors can hike to the summit of Bartolomé Island via a roughly 2,000-foot-long (600-meter-long) trail and enjoy views of Pinnacle Rock, Sullivan Bay, an Isla San Salvador (or Santiago). You can also visit the island’s north beach for wonderful snorkeling opportunities and to swim among beautiful fish and Galapagos penguins. Alternatively, visit the south shore to see white-tipped sharks, spotted eagle rays, and stingrays.
Things to Know Before You Go
How to Get There
Most guided tours to Bartolomé Island depart from Puerto Ayora on Santa Cruz. From the port, you can take a ferry or a yacht across the Itabaca Channel; the journey takes about two hours. To reach the Galapagos, fly from Quito or Guayaquil to the islands’ main airport, located on Baltra.
When to Get There
If you plan to visit during peak season, be sure to book tours in advance. Peak season in the Galapagos coincides with most travelers’ vacation periods: mid-June through early September and mid-December through early January. If you visit in February, you probably won’t be able to spot any penguins as they migrate from Bartolomé to Isabela Island and Fernandina Island during that period. The penguins on Bartolomé are the most active in September.
Staying on a Boat or on Land?
Most of the islands in the Galapagos are uninhabited, and accommodation options on land are almost all located on Santa Cruz and San Cristobal. You can island hop from either of these spots via guided day trips. Alternatively, book a multi-day tour aboard a boat, which will follow either a northern or southern route through the islands and include land excursions along the way.
Address: Ecuador
Read MoreShow Less

6
Explore the iconic area of Bartolome Island on a full-day tour from Puerto Ayora. This volcanic island is rich in biodiversity both on land and underwater. Take in the beautiful landscapes from the viewpoint at the top of the island and discover the abundant marine life with a snorkeling excursion. Enjoy a boxed lunch and listen to informative commentary from your guide throughout the day.
...  More
From
US$298,00
From
US$298,00
Learn More

11
The Galapagos Islands are a UNESCO World Heritage site and one of the most bio-diverse places on earth, but you don’t have to take a pricey multi-day tour to experience Ecuador’s natural wonders. Discover Bartolome Island on this full-day tour from Santa Cruz, marvel at the extraordinary volcanic landscapes and enjoy spectacular views of the surrounding islands. Hotel pickup and drop-off is included.
...  More
From
US$373,05
From
US$373,05
Learn More

2
The Galapagos Islands with their unique and diverse plant and animal life lie off the coast of Ecuador in the Pacific Ocean. With this multi-day tour, save time traveling between islands by focusing on the most interesting spots on just two. See giant tortoises at the Charles Darwin Research Station on Santa Cruz, and choose between visits to Bartolome or North Seymour Islands.
...  More
From
US$1 274,00
From
US$1 274,00
Learn More

Galapagos Pro invites you to spend 5 days exploring the gorgeous Galapagos Islands and witness its magical landscapes and unique wildlife. Whether you’re here to soak up the sun on palm-lined beaches or for one-of-a-kind wildlife experiences, Santa Cruz Island and its surroundings offer a multitude of opportunities. Santa Cruz Island is the geographic and tourist center of the Galapagos. Being the starting point for island-hopping trips, it has charming hotels, restaurants, and bars. The town of Puerto Ayora is the perfect place for a memorable and comfortable stay in the Galapagos!
...  More
From
US$1 489,24
From
US$1 489,24
Learn More

Combine 3 days minicruise around Santa Cruz main islets with snorkeling and hiking in Isabela island. Take a minicruise by Santa Fe, South Plazas, Bartholomew and North Seymour then stay 2 days in Isabela choose to snorkel in: Cape Rose, Turtle island and 4 hermanos. Also hike to Sierra Negra and Chico Volcanoes.
...  More
From
US$1 487,18
From
US$1 487,18
Learn More

You will explore the Galapagos Islands through a combination of organized day tours with an English speaking guide and you will have some time to explore by yourself with our self-guided packages. You will stay in local tourist superior class hotels with a private room and bathroom. All tours include some meals, transportation on and between the islands and activities mentioned in the tour itinerary. Some of the highlights of this amazing tour are: • Santa Cruz Highlands: your first contact with the Giant Galapagos Tortoises. • Visit one of the uninhabited islands: Bartolomé, Santa Fe or Seymour. • Los Tuneles: snorkel in the clear waters and swim with different animal species. • Kayak in Tintoreras Bay: if you are lucky you will find some sharks here! • San Cristobal Island: the island with the Sea Lion beach. • Snorkel at Kicker Rock: one of the most spectacular places of the Galapagos.
...  More
From
US$2 663,93
From
US$2 663,93
Learn More

A fantastic and adventurous journey in the Galapagos in just 5 days. Discover the marvels of the enchanted Islands bi sailing on board our luxurious three-time in-a-row World Travel Award Winner (2017, 2018 & 2019) motor yacht, the SEA STAR JOURNEY. Prepare for a magical trip sailing from the Central to the Northern Archipelago with visit to must-see Genovesa and Bartolome Islands plus other enchanted sites filled with untamed wildlife & plantlife including boobies, sea-lions, sharks, frigate birds, Darwin finches, hawks, giant tortoises and much more! On the Sea Star, snorkeling equipment and sea-kayaks are available without extra charge (wet-suits for rent). Hope on board for a lively encounter with nature.
...  More
From
US$3 322,04
From
US$3 322,04
Learn More

1
Great tour, Galapagos Natural Life direct tour operator had designed this tour in order to know the better places to see widlife in Galapagos Island, 5 days with 3 islands, you Will se the most representative animals in Galapagos islans as Giant tortoise, blue footed booby , penguins, sea lions, marine iguanas, corral sharks, flamingos, darwin finches and more, we included in our Budget tourist class accommodation but you can ask for upgrade to superior or firts class accommodation, we can open new departures any day with minimun one passenger, our rates doesn't include galapagos flight
...  More
From
US$1 225,65
From
US$1 225,65
Learn More

Discover a unique experience in the "Enchanted Islands" with us just as thousands happy travelers have done onboard our the most rated ship, the M/C Alya Luxury Cruise, also known as “The Jewel of Galapagos”, due to its design representing the perfection, beauty, and uniqueness of an exotic paradise, as are the Galapagos Islands considered Natural Heritage of Humanity by UNESCO in 1978. Also, learn more from endemic species, flora, and fauna, explore uninhabited places and discover a hidden underwater world snorkeling with our professional naturalist guides. In this magical and unforgettable journey of 6 days & 5 nights with our itinerary "B", you will visit the marvelous northern islands of the archipelago. 16 guests only, onboard of most luxurious Galapagos cruise. Go ahead to explore the Galapagos Islands with an authentic "Galapagueños" crew. Just define the travel date of your convenience and we will do the rest. You're in good hands. Early Bird 2021 Feb 22nd to 27th
...  More
From
US$4 731,00
From
US$4 731,00
Learn More

Visit one of the most popular islands of the Galapagos Islands thanks to its beautiful landscape, this island is the emblem of the Galapagos located northwest of the archipelago. Here we take a walk to the top of the island to observe the landscape, we can also see different types of volcanic cones, lava lizards and marine iguanas.
...  More
From
US$359,00
From
US$359,00
Learn More

Bartolome island on board of Sea Lion Yacht (daily tour)

Day tours are provided by yachts that do have permission to disembark at iconic islands (North Seymour, Bartolome, South Plaza and Santa Fe) and they are done in the company of a professionally-trained Naturalist Guide. It’s an excellent way to experience the Galapagos National Park. Sea Lion Yacht, usually take care of everything for those onboard. Not only are all safety measures considered, but also lunch and snorkeling masks are included. A delicious buffet-style lunch awaits guests that are coming back from swimming, hiking or snorkeling. If you require a special meal or have dietary restrictions, be sure to let us know. The Sea Lion also has an indoor, air-conditioned space where guests can sit comfortably to observe the amazing Galapagos landscapes! A 5-member crew is at your disposal, making sure you are safe and comfortable at all times. Our Naturalist Guide briefs the group prior to disembarking at a specific island or before partaking in any activity.
...  More
From
US$374,00
From
US$374,00
Learn More

Things to do near Galapagos Islands