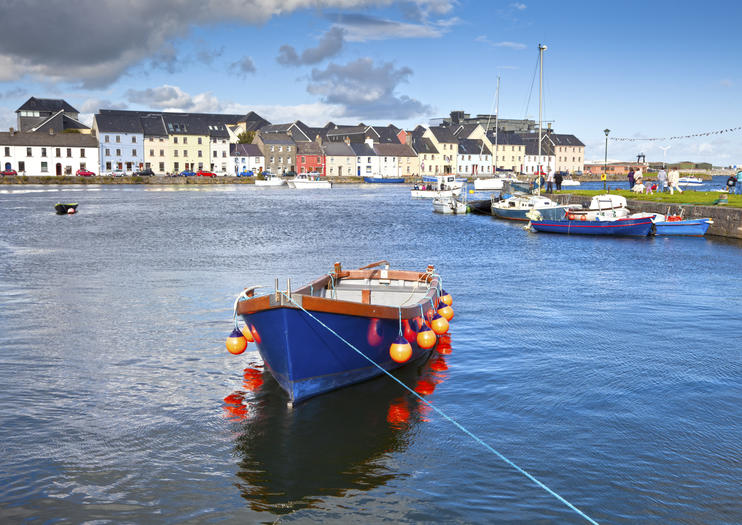 Flowing in from the Atlantic Ocean on Ireland’s west coast, Galway Bay laps the shores of some of the country’s most picturesque stretches of coastline. With the three windswept Aran Islands at its periphery, the bay meets land at the artsy city of Galway and numerous fishing villages, coastal cliffs, and beaches.
The Basics
Day tours of Galway Bay depart from Dublin and Galway City, and typically provide round-trip transport. Most excursions stop at key attractions along the Wild Atlantic Way, such as the Irish-speaking seaside village of Spiddal (An Spidéal), the 16th-century Dunguaire Castle, and the Cliffs of Moher. Multi-day voyages often combine a visit to Galway Bay with a trip to the Aran Islands, other parts of Ireland (e.g. County Limerick), or Northern Ireland.
Things to Know Before You Go
How to Get There
There are numerous access points for Galway Bay, with the easiest to reach being Galway City. Galway-bound trains leave regularly from Heuston Station in Dublin; buses also connect Galway to the capital.
When to Get There
The bay, especially the parts in and around Galway City, is busiest and most vibrant in summer. Get there early in the day to experience the bay at its most peaceful. Sunrise and sunset are particularly pretty.
Spotting Galway Hookers
Gaze out across the bay and you may spot a Galway hooker, a traditional boat native to the area. Identifiable by their black bases and dark red sails, Galway hookers were designed to withstand the bay’s often rough seas. During the Cruinniú na mBád festival in August, these distinctive local boats can be seen sailing a route between Connemara and Kinvara.
Address: Galway Bay, Ireland
Read MoreShow Less

Cliffs of Moher and Burren Day Trip, Including Dunguaire Castle, Aillwee Cave, and Doolin from Galway

305
Explore Ireland’s beautiful Burren region and discover top natural landmarks including the Cliffs of Moher with ease on this day tour from Galway. Travel through the Burren’s rugged landscapes with your guide and discover local attractions such as the 16th-century Dunguaire Castle and Aillwee Cave. Explore walking trails on top of the mighty Cliffs of Moher at your leisure and enjoy panoramic views over the coastal scenery. Watch the skies for sightings of native birdlife, then stop in Doolin on route back to Galway.
...  More
From
US$41,32
From
US$41,32
Learn More

22
Maximize time spent in Galway with a 48-hour ticket for the hop-on, hop-off sightseeing bus. Explore the city at your own pace, hopping off the bus at any of eight tour stops to see popular landmarks including Eyre Square and the Salthill Promenade. Utilize the bus as many times as you wish during a 48-hour period.
...  More
From
US$13,81
From
US$13,81
Learn More

Things to do near Galway