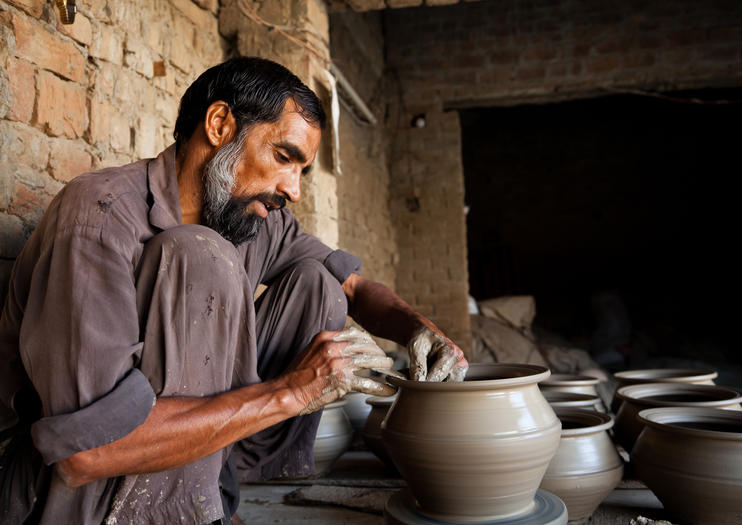 The Ancestral Goa center offers an excellent introduction to Goan life. This living history museum was set up by a local artist. Included are a typical 19th-century Goan village, featuring traditional homes, displays of handicrafts such as pottery and cobbling, and even a replica of a sacred spring, plus lots of activities for kids.
The Basics
This fun attraction, also known as the Big Foot Museum (owing to its dance floor shaped like a huge foot), features carved sculptural depictions of Goan life, including figurines of people engaged in traditional trades, from potters to vegetable sellers. Workshops for kids focus on nature and include painting with natural dyes and a theme park that brings local kids from across economic backgrounds to play together for the day.
Travelers can join a tour that includes a guided visit to the Ancestral Goa Center and other cultural highlights. Some tours may include a traditional lunch featuring regional ingredients.
Things to Know Before You Go
How to Get There
This attraction is located in the inland town of Loutolim, in South Goa. It's about an hour away from Panaji by car, or a half-hour from Vasco da Gama, where the airport is located. The closest city is Margao, a 15-minute drive south of the museum. It’s hard to get to the Ancestral Goa Center via public transportation, so travelers should arrive by taxi or join an organized tour.
When to Get There
Goa is a year-round destination, though it’s definitely less crowded during the rainy monsoon season. As the museum is largely outside, it’s best to visit when the weather is dry. Travelers may want to arrive early to avoid the midday.
Goan Handicrafts
Goa offers all sorts of traditional crafts, though many locals have taken up newer, sometimes imported trades (such as batik) to keep up with demand from tourists. You’ll also see plenty of merchants from the Himalayan region of Kashmir selling jewelry, papier-mâché crafts, and clothing. Popular finds include wooden toys and kitchenware, brass work, terracotta pottery, and coconut carvings.
Address: Big Foot, Loutolim, Goa 403718, India
Read MoreShow Less

Things to do near Goa