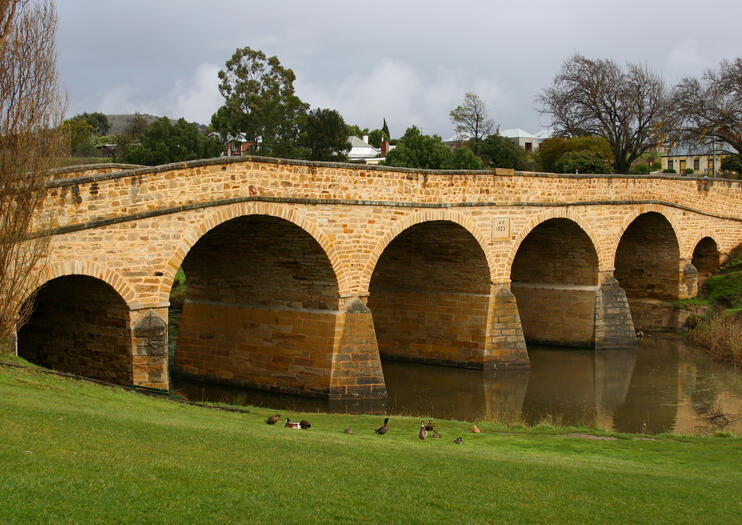 Extending between Richmond and Port Arthur, the Convict Trail traces the history of Australia— which was initially founded as a convict settlement—back to its origin. Learn about how convicts developed the country’s infrastructure as you pass some of the tallest and most-scenic sea cliffs on the planet.
The Basics
Hobart serves as the gateway to Tasmania’s Convict Trail; day trips and overnight excursions typically depart from here and nearly always include a stop at the UNESCO World Heritage-listed Port Arthur Historic Site, considered the most intact convict site in Australia. To get the full Convict Trail experience, take a high-speed boat trip along the coastal sea cliffs from Eaglehawk Neck or go hiking in Tasman National Park.
Things to Know Before You Go
How to Get There
The Convict Trail begins in the town of Richmond, which is 17 miles (27 kilometers) from Hobart. The easiest way to take in the trail is by self-driving, but it’s possible to visit some areas, such as the Port Arthur Historic Site, on a day trip from Hobart.
When to Get There
Individual attractions on the Convict Trail maintain their own hours. The best time to visit generally falls between December and February—summer in Australia—when the weather is warm and dry enough for enjoying the trail’s outdoor attractions.
Great North Road
The Convict Trail follows 149 miles (240 kilometers) of the Great North Road between Sydney and the Hunter Valley. This road, still used today, was built between 1826 and 1836 by hundreds of convicts working in leg irons. It was considered one of Australia’s greatest engineering feats of the nineteenth century.
Address: Bridge Street, Richmond 7025, Australia
Admission: Free
Read MoreShow Less

Things to do near Hobart