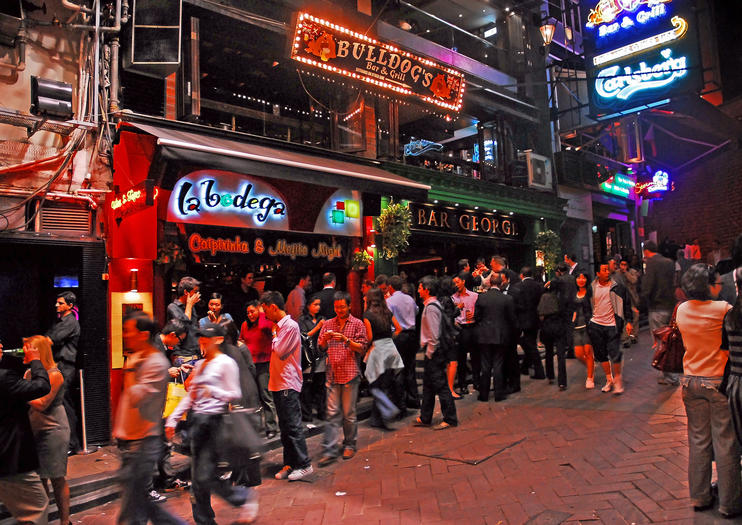 One of Hong Kong’s most popular dining, entertainment, and nightlife destinations, Lan Kwai Fong has the highest concentration of watering holes in the city: more than 100 restaurants, bars, and clubs are all crammed into just a few blocks. Conveniently located in Central, it’s where expats, locals, and visitors go to eat, drink, and be merry.

The Basics
Also known as LKF, Lan Kwai Fong comprises the L-shaped Lan Kwai Fong and D’Aguilar Street, but has expanded in recent years to encompass nearby streets, including Wo On Lan, Wing Wah Lane, Wyndham Street, and Wellington Street. The best way to explore Lan Kwai Fong is on foot. Not surprisingly, Lan Kwai Fong features on nightlife-focused tours, including pub crawls. Combine a stop here with a Hong Kong sightseeing tour to see other top city attractions such as Victoria Peak, Repulse Bay, Stanley Market, and Tsim Sha Tsui. Or visit on a hop-on hop-off bus tour or tram tour to explore at your leisure.

How to Get There
Lan Kwai Fong is located in Central. Take the MTR to Central Station (Exit D2) or Hong Kong Station (Exit B2 or C) and walk south. A number of buses also stop nearby, including bus numbers 12M, 13, and 40M. You can also take the tram to the Pedder Street stop.

When to Get There
While some restaurants and venues are open from lunchtime, Lan Kwai Fong really gets going after sunset. There’s a lively happy hour scene here, and many restaurants fill up for dinner. The clubs get going late, sometimes after midnight. Lan Kwai Fong is also popular around Halloween, Christmas, and New Year’s Eve, when the streets and venues can get extremely crowded.

876
This unique hop-on hop-off tour allows you to see all of Hong Kong’s highlights with ease. Hop off at any of the stops along the route and explore the sites at your leisure using a provided map. Whether it’s the Man Mo Temple, famed Stanley Market, or the fishing village of Aberdeen, your 24- or 48-hour ticket grants you access to various travel routes and one-way travel on the Star Ferry. There’s no easier or more flexible way to explore. Your Premium or Deluxe ticket includes a choice of admission to Sky100 Hong Kong observation deck or a ride on the Peak Tram. The Deluxe option also offers a traditional sampan ride and a tour of Kowloon at night.
…More
From
US$57,12
From
US$57,12
Face masks required for travelers in public areas
Face masks required for guides in public areas
Face masks provided for travelers
Learn More
Taking safety measures

36
Join a pub crawl in Hong Kong to experience the best pubs, clubs and live music venues with perks that include skip-the-line entry, drink specials and a free shot at four bars. Get free VIP entrance to the hippest club in town pose for great photos shot by a professional photographer who documents the fun throughout the night. Save money, meet new people and get to know the city’s nightlife with a local guide to show you around.
…More
From
US$13,22
From
US$13,22

Make the most out of your stay in Hong Kong by discovering the best this city has to offer in a fully customizable tour! At the desired time, an experienced English-speaking professional driver will pick you up in a private vehicle ready to share historical facts, information about the sights and, of course, immerse you into the Hong Kongese lifestyle. Start your tour with the top tourist attraction in Hong Kong. Take a walk around the Victoria harbor and enjoy the views of the city. Admire the marvelous choreography of lights at the Symphony of Lights show. Explore the famous Temple Street Market place, Aberdeen Fishing Village, Victoria Peak and experience the Hong Kong nightlife at its finest at Lan Kwai Fong! Our drivers are not licensed to accompany you into the sights but are very knowledgeable and will provide all the necessary historical information and their local perspective. At the end of the ride, your friendly driver will drop you off at your accommodation.
…More
From
US$153,68
Price varies by group size
From
US$153,68
Price varies by group size

3
Get your bearings of Kowloon and taste your away around the city on this exciting Hong Kong night markets and street food tour. Take the stress out of getting lost by having a guide to lead the way. You’ll explore small side streets and night markets in Mong Kok and learn local secrets that you wouldn’t find out about otherwise. Your guide will advise you on the best local dishes to try, and you’ll enjoy 6-8 food tastings.
…More
From
US$170,93
Price varies by group size
From
US$170,93
Price varies by group size
Face masks required for travelers in public areas
Face masks required for guides in public areas
Hand sanitizer available to travelers and staff
Learn More
Taking safety measures

If you want receive tailored recommendations and have ample time to ask questions, opt for a private tour of Hong Kong Island—the ideal choice for first-time visitors looking for an introduction to the metropolis. Without the worry of navigating public transport alone, you’ll travel between top Hong Kong attractions, such as Victoria Peak (Tai Ping Sham) and Stanley Market, while you receive local insight from a guide. Hassle-free hotel pickup and drop-off are included.
…More
From
US$236,80
Price varies by group size
From
US$236,80
Price varies by group size
Face masks required for travelers in public areas
Face masks required for guides in public areas
Hand sanitizer available to travelers and staff
Learn More
Taking safety measures

A Night In Hong Kong With A Local: Private & Personalized

1
Our local host will take you on a journey of discovery around the vibrant city of Hong Kong at night. What’s your vibe - do you want to shop, eat, take in dazzling views or party all night long? Once we’ve got that information locked down, one of our hosts will arrange a night in Hong Kong which is a perfect fit for you (as perfect a fit as your party pants no doubt are). With so many areas and districts offering their own distinct brand of night time fun, it can be challenging to narrow the itinerary down, but not to worry, we’re here for you! Within 24 hours after booking you'll receive a short questionnaire about your personality and interests. Based on your responses, you'll be assigned a like-minded host. Your host will communicate with you directly to suggest an itinerary to help you discover what makes the city unique. You will also agree on a meeting time and place.Your itinerary is flexible, so during the experience, you can always change your mind about what you want to do.
…More
From
US$162,79
Price varies by group size
From
US$162,79
Price varies by group size
Face masks required for travelers in public areas
Face masks required for guides in public areas
Hand sanitizer available to travelers and staff
Learn More
Taking safety measures

For all foodies, eating at a Michelin-starred restaurant is at the top of the bucket list. On this private food tour, you’ll be eating at three Michelin-starred restaurants in the heart of Hong Kong! First up is a delicately designed plate of four distinctive tastings. A deliciously smooth poached duck egg, salted steamed fish, abalone (sea snail) in liquor, and an exquisite foie gras. Your next exclusive visit with your favorite local is a restaurant that specializes in roasting geese. The secret family recipe has become so popular that even the late celebrity American chef, Anthony Bourdain came all the way to the restaurant just to taste it. The third and final restaurant on your private food tour is the sleek and sophisticated "Le Salon De Thé" with a menu inspired by the esteemed Joël Robuchon. In this French tea salon, you can choose from a selection of delicious French cuisine inspired desserts.
…More
From
US$190,44
Price varies by group size
From
US$190,44
Price varies by group size
Face masks required for guides in public areas
Social distancing enforced throughout experience
Guides required to regularly wash hands
Learn More
Taking safety measures