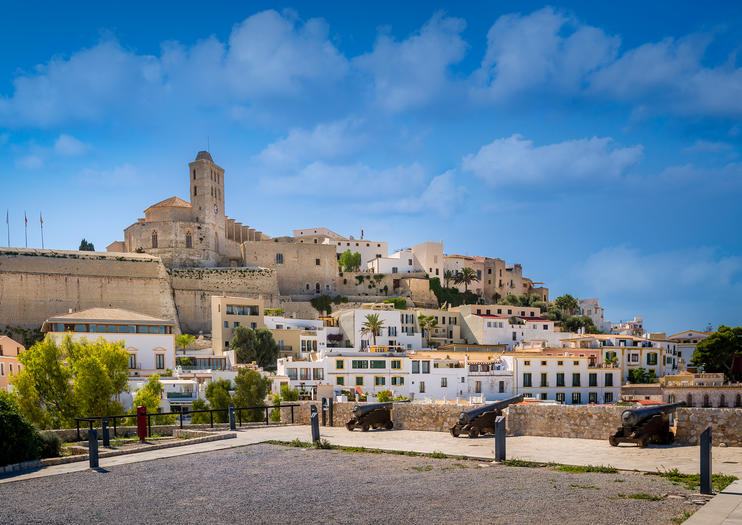 Sitting pretty on a hilltop in Ibiza Town (Eivissa), the fortified area of Dalt Vila has been occupied since Phoenician times. Behind its chunky defensive walls and 16th-century bastions lies a maze of cobbled streets that slope up to the cathedral at the summit, where views of the glistening coast await.
The Basics
The tranquil, history-filled streets of Dalt Vila showcase a quieter side of Ibiza—one at odds with its party-hard reputation. Because of its narrow lanes, Dalt Vila is best explored on foot, with many walking tours of Ibiza Town passing through here. Visitors can also join guided scooter tours and zoom by top attractions such as the Ibiza Cathedral, Museu Puget, and Convento de San Cristobal, or rent a scooter and zip around Dalt Vila independently with the aid of a map.
Things to Know Before You Go
How to Get There
The main entrance to Dalt Vila is the Portal de Ses Taules, which is accessible via a ramp leading from Ibiza Town’s Mercado Viejo (Old Market). Ibiza Bus runs multiple routes connecting Ibiza Town to other major island destinations, including Sant Antoni de Portmany, Santa Eulària, and Sant Jordi.
When to Get There
Dalt Vila—like the rest of Ibiza—attracts more crowds during the summer months, from June through September. One of the best times to visit is during the second weekend in May, when the family-friendly Medieval Festival takes place in Dalt Vila, with medieval-inspired market stalls and demonstrations of traditional crafts.
Historical Highlights of Ibiza Town
Visitors with an interest in Ibiza Town’s lengthy history may want to visit the Necròpolis del Puig des Molins, an ancient burial site with more than 3,000 tombs, some of which date back as far as the 7th century BC. The sturdy walls that encircle the Dalt Vila, meanwhile, are a good spot for an evening stroll. Circumnavigating the entire 1-mile-long (2-kilometer-long) ramparts on foot usually takes around an hour, and is best done at night, when they are impressively lit.
Address: Ibiza Old Town, Spain
Read MoreShow Less

Experience some of Ibiza’s top attractions on this guided excursion. After a convenient hotel pickup, enjoy a privately chauffeured tour in a luxury vehicle or minibus with an English-speaking guide. Learn about the area while visiting landmarks like the Cathedral of Santa María, Ibiza Centro, Castell de Eivissa, and Dalt Vila.
...  More
From
US$417,68
Price varies by group size
From
US$417,68
Price varies by group size
Learn More

10
Explore Ibiza Town on two wheels with a private bike tour. Customize the tour itinerary and start time according to your needs and set out to see popular landmarks. Visit the Necropolis del Puig, the old Ibiza port, and a beautiful beach called Playa Talamanca. Learn about local culture and history from your private guide.
...  More
From
US$76,67
Price varies by group size
From
US$76,67
Price varies by group size
Learn More

3
We’ll run together on a 8k route around Ibiza Town. We’ll stop frequently so that I can share fun stories and show you the best things to do and places to eat, drink and hang out. The tour takes around 2 hours and we’ll run at a pace that everyone is comfortable with (which might be slower than your usual pace). The tour will help you to quickly know your way around and give you the best tips to be able to make the most of your time in Ibiza.
...  More
From
US$57,22
Price varies by group size
From
US$57,22
Price varies by group size
Learn More

1
We’ll run together on a 5k route around Ibiza Town. We’ll stop frequently so that I can share fun stories and show you the best things to do and places to eat, drink and hang out. The tour takes around 1.5 hours and we’ll run at a pace that everyone is comfortable with (which might be slower than your usual pace). The tour will help you to quickly know your way around and give you the best tips to be able to make the most of your time in Ibiza.
...  More
From
US$45,77
Price varies by group size
From
US$45,77
Price varies by group size
Learn More

Good morning guys! Greetings from Lyubov) My pleasure to invite you for a cup of coffee and tasting of some typical Spanish foods and deserts. What is the best beginning of the day? Of course - it's a good breakfast! I know how to make it even better bringing you to the best Ibizan restaurants and cafes. My goal is make you know the best places to eat in Ibiza and for sure - to brighten your holidays with good mood, nice walks and interesting talks about Spanish and Ibizan cuisine!
...  More
From
US$51,50
From
US$51,50
Learn More

24
Do you wanna know more about the incredible story of the construction of the renaissance wall, the amazing adventures of the phoenicians through the Mediterranean sea, and the improbable feats and mysteries of the Ibiza land pirates? We'll tell you all this while taking you on a pleasant walk through the highlights of the city, which is one of the most beautiful of the Mediterranean sea, declared UNESCO World Heritage Site. You can choose between a Day tour or a Night tour. Plus, we'll show you some secrets spots in the old town you certainly wouldn't have explored on your own, such as the old Can Comasema, a Gothic house of the 15th century, probably one of the most beautiful and picturesque in town, or the Soto, a hidden tunnel from where the Ibizan soldiers entered the city without being seen by the enemy... The tour is ideal for passengers of cruise ships who want to make the most of their time in Ibiza. There are several ways to get to the staring point, including public bus.
...  More
From
US$24,00
US$40,00
US$16,00 savings
From
US$24,00
US$40,00
US$16,00 savings
Learn More

1
Discover and fall in love with Ibiza city (or "Vila" as we call the residents of the Island) with us! With "Get Your Tour Ibiza" A tour that is carried out following the strictest prevention measures to be able to enjoy Coronavirus without risk of contagion Explore and enjoy on this private tour about the history of Ibiza (with more than 2700 years) until today. Time has created and shaped a magical environment in this World Heritage city, from the ancient Phoenicians, Romans, Arabs, to the arrival of the hippies. For adaptation of people with reduced mobility contact us. All tickets are included in the price. Children up to 12 years old will not pay for this experience. We speak more than 11 languages. Pick up service from the accommodation, port or airport is included. If you like what you read, you can find us and see the rest of the tours we offer. We are "Get Your Tour Ibiza" and we want to make you happy
...  More
From
US$120,16
per group
From
US$120,16
per group
Learn More

This tour starts at America restaurant in Figueretas, a wonderful spot in front of the sea, where you will discover the real taste of a Paella Ibizenca together with Sangria no limit. Then you will enjoy a boat ride towards Ibiza Port, where you will enjoy a guided tour through the wonderful Dalt Vila, an Unesco world heritage site. After that, there will be a stop at Tango bar, a typical cocktail bar in the center of Ibiza port. In the end you can decide to go back by boat to Figueretas or to remain in Ibiza port to enjoy your night.
...  More
From
US$54,01
US$67,52
US$13,51 savings
From
US$54,01
US$67,52
US$13,51 savings
Learn More

Come with us and enjoy this 4-hour walking tour through Ibiza, get mesmerized by its architecture, its history and a cultural legacy that blends influences from different cultures (roman, pirates and muslims, among others). During this beautiful and informative walk, you will count on the company of a private licensed guide. Get to know the wonderful old part of the town, Dalt Vila, with a local expert.
...  More
From
US$379,92
per group
From
US$379,92
per group
Learn More

Things to do near Ibiza