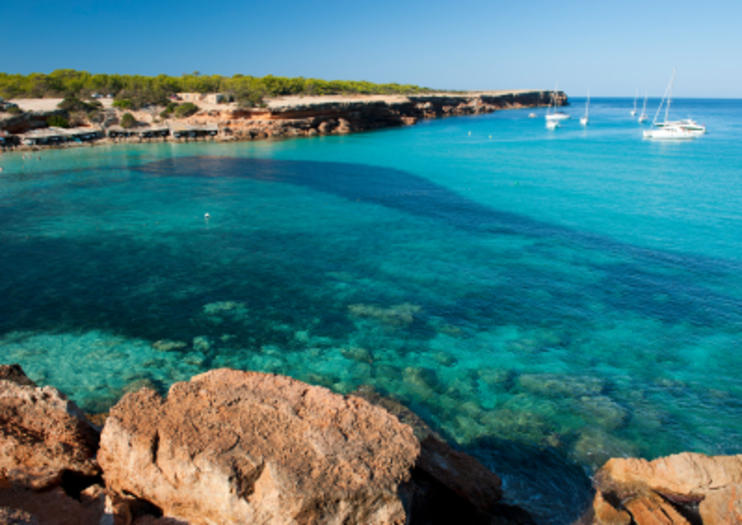 The sleepiest and smallest of Spain’s Balearic Islands, Formentera is the ultimate Mediterranean coastal idyll. Free from the all-night clubs and persistent touts of neighboring Ibiza, Formentera has a mellow, leisurely vibe. The island’s biggest lure is its natural beauty—escape to its white sands, clear waters, and scenic walking paths.
The Basics
Unspoiled and relatively undeveloped Formentera can be visited as part of a day trip from Ibiza. Some visitors go as part of lively catamaran cruises, disembarking at Formentera for a couple of hours’ free time during which they explore at will. Alternatively, you can make your own way to Formentera and then rent a scooter on the island. Scooters provide an easy and hassle-free way to travel between the islands’ secluded beaches, and the island’s relatively flat terrain makes riding easy.
Things to Know Before You Go
How to Get There
Formentera, just 2 miles (3.5 kilometers) from Ibiza, can be reached only by sea. Three different companies (Trasmapi, Mediterranea Pitiusa, and Balearia) operate ferry services that depart from the harbor in Ibiza Town and dock at La Savina in Formentera. The ferry journey takes around 35 minutes. Water taxis and charter boats also take visitors across to the island from Ibiza.
When to Get There
In Formentera, tranquility reigns in June and early September. July and August are busier so if you plan on going then, plan on arriving earlier in the day to beat the crowds. From mid-September on, some shops and restaurants on Formentera begin to close up for the off-season.
Best Beaches on Formentera
Formentera’s greatest feature is its spectacular coastline. Es Pujols encompasses several hotels and the busiest beaches. During summer, buses run from the port to Playa de Ses Illetes, a water sports–friendly beach lined with charming fish restaurants, and to the quieter Playa de Llevant, a spacious and serene sand-dune–backed strip of sand with crystal-clear waters and views across to Ibiza.
Address: Spain
Read MoreShow Less

0 Tours and Activities to Experience Formentera

Things to do near Ibiza