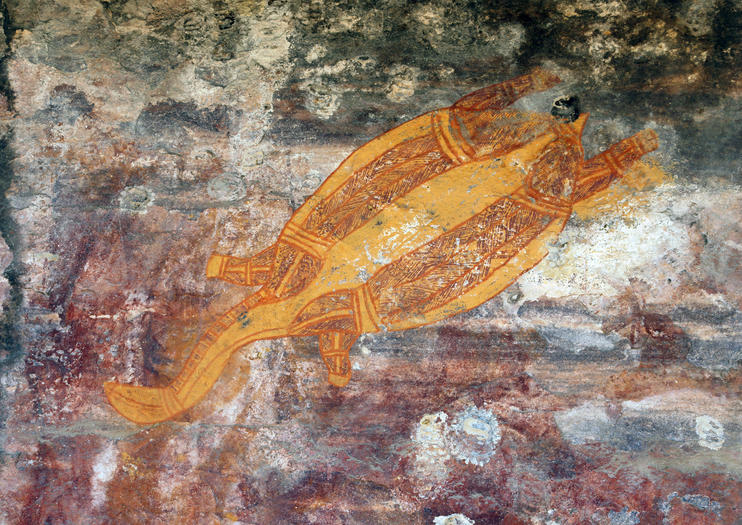 It’s hard to grasp exactly what you’re looking at when you see the rock drawings at Ubirr. Here, etched before you on ancient rock that springs from the red dirt Earth, are drawings placed here by Aborigines nearly 20,000 years ago. How the drawings have managed to survive for so long is a fascinating geologic story, but it's one that pales in comparison to the stories told by the drawings themselves.
Located in what’s known as the East Alligator Region of Kakadu National Park, Ubirr is a UNESCO World Heritage site that borders on desert magic. In addition to collections of ancient rock art, the site offers sweeping, panoramic views of the surrounding flood plains and fields, and includes a sacred “Rainbow Serpent” painting in one of the three different galleries. According to local Aboriginal legend, the serpent was involved in the very creation of Earth surrounding the site, and is regarded as one of the world’s oldest figures of early creation. To access the ancient rock art at Ubirr, follow the short, one-kilometer walking path that takes 30 minutes to complete.

Ubirr is located approximately 30 minutes from the small town of Jubir—which itself is located three hours east of the city of Darwin. The best time to visit it during the dry season, from May through early October, as many roads become completely impassable once monsoon rain starts to fall. Hours of operation from May-November are 8:30am-sunset, and from December-April, in the peak of the wet season, the hours are shortened from 2pm-sunset. For visitors over 16 years old, admission is $25.
Address: Kakadu, NT 0822, Australia
Admission: $25
Read MoreShow Less

0 Tours and Activities to Experience Ubirr

Things to do near Kakadu