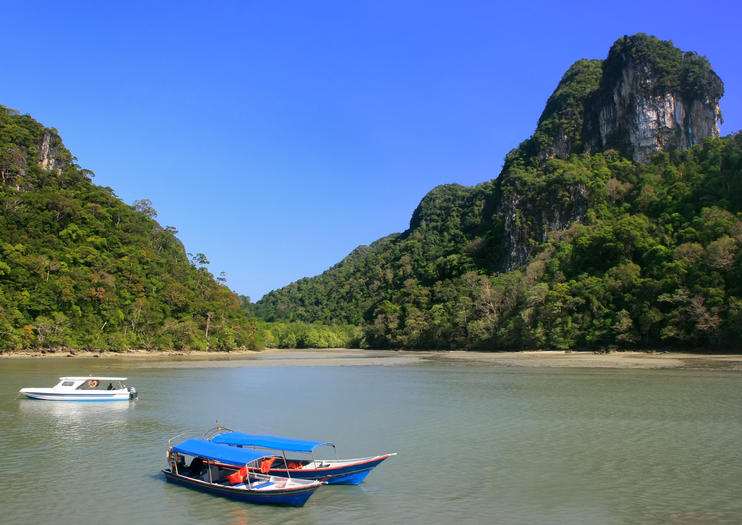 Dayang Bunting Lake (Tasik Dayang Bunting) is located on Dayang Bunting Island, the second largest island in the Langkawi island group in Malaysia. "Dayang bunting" means "pregnant maiden", so the lake is also sometimes known as Pregnant Maiden Lake.
The legend surrounding this lake says that a princess named Mambang Sari married a man named Mat Teja and had a son. Unfortunately the boy got sick and died just a few days after he was born. The princess laid his body to rest in the lake and made a blessing to all women who have trouble conceiving a child. Supposedly infertile women who go for a swim in the lake will later be able to get pregnant.
Despite only being separated from the sea by less than 100 feet, Dayang Bunting Lake is a freshwater lake. Popular activities include swimming and renting paddle boats. You can also walk on a path through the mangrove forest that surrounds the lake. In the forest, you'll have the chance to see some of the 90 bird species that live on the island, as well as lizards, monkeys, butterflies, and other native animals and insects. The lake is part of Dayang Bunting Marble Geoforest Park, which has many limestone formations and caves.

Dayang Bunting Lake on Dayang Bunting Island is about 12 miles south of Langkawi's main island. You can get there by boat from either Kuah Jetty or at Pantai Cenang, and the journey takes about 15 to 20 minutes. There are several island hopping tours that include the island and the lake.
Address: Kedah, Malaysia
Read MoreShow Less

Things to do near Langkawi