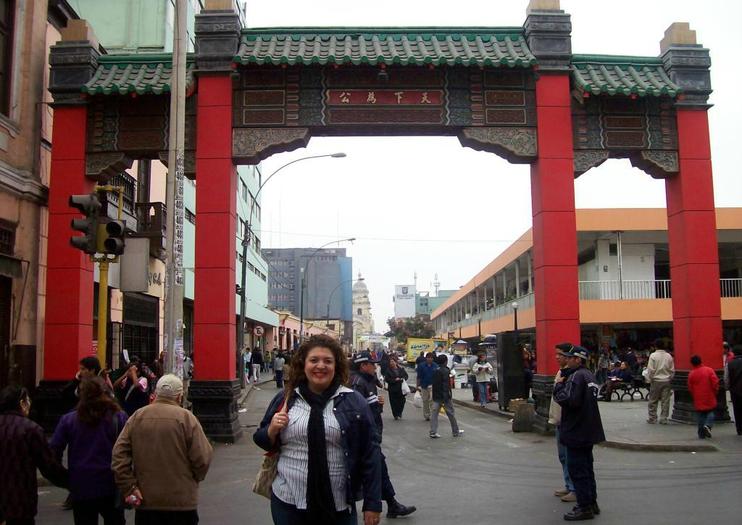 Much like New York and San Francisco, the city of Lima has its own Chinatown (Barrio Chino). Peru’s ethnic Chinese community comprises an estimated 1.5 million people — some five percent of the total population — and the hub of that community lies in the heart of Lima’s historic district. The neighborhood was founded by Chinese immigrants during the mid nineteenth century when Chinese import companies began opening commercial houses in the area.
Visitors pass through the red Chinese archway and into a maze of traditional Chinese architecture. Streets are lined with Buddhist temples, shops selling traditional ingredients and medicinal herbs, and dozens of Chinese restaurants, known locally as chifas. Come at midday, and many restaurants will offer set menus.

Want to live a local life experience? Come with with us where tourists don't usually go. We are ready to give a unique experience in Lima by exploring the Downtown like a Peruvian. We take the metro bus to go to Downtown Lima and visit San Martín Square and La Merced Church (Colonial), After that we'll have a local life adventure since we will visit Central Market of Lima & China Town to learn how Peruvian food has become the best in South América and how Chinesse Inmigrants influenced in our country. After the local markets, we will go to the catacombs of Lima and Main Square, which are very important places of the history of Perú. Don't miss the chance to live this unforgettable experiencie!
...  More
From
US$35,90
Price varies by group size
From
US$35,90
Price varies by group size
Learn More

6
See Lima like a local as you explore a different side of the city on this 3.5-hour excursion through the city’s downtown. Explore a mix of 20 of the Lima’s lesser-known and classic attractions during your trip, learning about the city’s unique food, music, lifestyle, architecture and history as you go. Learn about the city’s past at sites like the Main Square, Presidential Palace, Catacombs and Gold Museum, then check out lesser-known sites like the city’s Chinatown and ‘Chifa’ restaurants serving Chinese-Peruvian food, plus much more. This alternative Lima tour, perfect for students and independent-minded travelers, also includes a guide, drinks and entrance fees for the city’s San Cristobal Hill and catacombs.
...  More
From
US$22,00
per group
From
US$22,00
per group
Learn More

Walking Tour in the Historical Centre and China Town

This is a gastronomic tour that you can not miss! We will visit a native market in Lima, where we will learn about the evolution of Peruvian food, from the time of the Incas until the arrival of the Spaniards. We will have a tasting of native fruits which are only found in Peru, also enjoy a delicious classic ceviche! We will also visit Chinatown and the central market of Lima to learn about the Asian influence in our cuisine. Finally, we will visit a very popular street where the best desserts of Lima are prepared. You can not miss it!
...  More
From
US$66,67
Price varies by group size
From
US$66,67
Price varies by group size
Learn More

The history of the flavors of Peru in a single tour!

This is a gastronomic tour that you can not miss! We will visit an autochthonous market in Lima, where we will learn about the evolution of Peruvian food, from the time of the Incas until the arrival of the Spaniards. We will have a tasting of native fruits which are only found in Peru, also enjoy a delicious classic ceviche! We will also visit the Chinatown and the central market of Lima to learn about the Asian influence in our cuisine. Finally, we will visit a very popular street where the best desserts of Lima are prepared. You can not miss it!
...  More
From
US$66,67
Price varies by group size
From
US$66,67
Price varies by group size
Learn More

4
Get a taste for the wealth of culture in Lima during this 8-hour trip covering the city’s one-of-a-kind culinary scene, history and popular art. Savor Peru’s many food delicacies at a Lima market and try ‘Chifa’ cuisine, blending Chinese and Peruvian influences in Chinatown. You’ll then visit the monuments of Lima’s historic downtown, a UNESCO World Heritage site, and enjoy a ceviche tasting and behind-the-scenes kitchen tour at a famous Lima eatery. Finish your day with handicraft shopping in bohemian Barranco. Your trip covers a driver-guide, round-trip hotel transport, all food mentioned in the tour details, all entrance fees and bottled water.
...  More
From
US$170,00
From
US$170,00
Learn More

Get ready to have fun and relax with us, my father and I will pick you up, then we'll head to Lima downtown, in the van you'll have wifi so you won't get disconnected. I'll explain the beginnings of Lima, the transformation it has had through time with anecdotes you won't see on the Internet. Our first stop will be Chinatown, here I will show you my neighborhood and the Lima that few people see. We will arrive to "Plaza San Martin" We will take a walk through the famous "jirón de la Unión" street that connects the square where we are with the main square of Lima, here we will see the government palace, the cathedral and the city hall. We will walk through my favorite place, the "alameda chabuca granda" and we will take a walk to the great wall to talk about the history of ancient Lima taking shape and as a grand finale we will visit one of the first markets in Lima, a place that has seen all the generations and surnames of the city pass by.
...  More
From
US$28,00
Price varies by group size
From
US$28,00
Price varies by group size
Learn More

This is a very complete and unique city tour. The activities we do and places we visit during this tour are the following: 1) The Main Central Market of Lima & Fruit Tasting. 2) Saint Francisco Museum & Catacombs. 3) Churros tasting typical dessert included. 4) Plaza de Armas: The Presidential Palace, City Hall, Cathedral and others buildings. 6) Plaza San Martín. 7) The Old Bolivar Hotel & Pisco Sour tasting. Come with us and be part of this unforgettable experience. Book it right now! Do not miss it!
...  More
From
US$45,00
Price varies by group size
From
US$45,00
Price varies by group size
Learn More

2
Fall in love with the flavorful Peruvian cuisine on this delicious food tour in Lima! Enjoy a selection of 10 tastings hand-picked by your foodie local host, just for you. From yummy must-tries like the beloved Ceviche to unique dishes like Chinese-Peruvian dumplings; you’re in for a treat, so bring your appetite. During this culinary tour in Lima, you will enjoy authentic local bites ranging from savory to sweet while also discovering the city and its highlights. Wander around the Central Market, one of Lima’s most important food centers. Explore Chinatown and see the unique way cultures merge within. And the cherry on top, do like the locals do and grab a Pisco cocktail from the oldest bar in Lima’s Historical Center ​that gets you in the mood with a Peruvian vibe. What can be better than that? Looking for a vegetarian alternative? It’s possible! The tour has been created with alternative tastings to fit your preferences. Just let your host know!
...  More
From
US$57,55
Price varies by group size
From
US$57,55
Price varies by group size
Learn More

Fall in love with the flavorful Peruvian cuisine on this delicious food tour in Lima! Enjoy a selection of the best food and drink tastings hand-picked by me, just for you. I will tell you about Peruvian history as we will see from the outside the Spanish Inquisition and Congress museum as well as the Cathedral and the Government Palace. We will try bites of famous dishes like stuffed olives and cheese from a local shop owner at the market and discover the Chinese influences in the city as you munch into Chinese Peruvian dumplings at Chinatown, and fall in love with the Andean street food as you sample Andean potatoes, eggs, lima beans, and chili sauces. Next we will visit the oldest continuously open bar in all Peru and have their famous ceviche, a seafood dish full of flavor. And for a sweet ending to your food tour in Lima, here’s a perfect combination: sweet churros and coffee! To help you get the most out of Lima, I’ll share some extra insider tips for the rest of your trip.
...  More
From
US$40,29
From
US$40,29
Learn More

1
Enjoy the experience of visiting Lima, Historical and Traditional Culinary: Visit to the market, Chinatown, Center of Lima, Barranco
...  More
From
US$210,00
From
US$210,00
Learn More