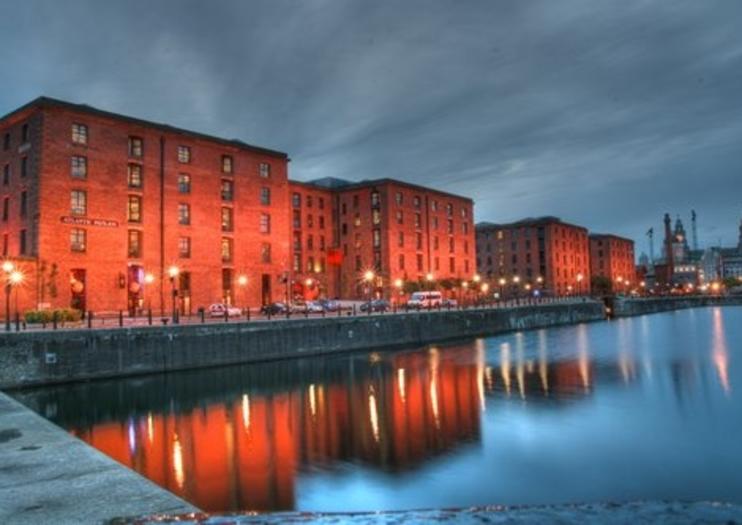 Liverpool’s Royal Albert Dock, formerly an important industrial center, is now home to popular attractions including Tate Liverpool, Merseyside Maritime Museum, and The Beatles Story. Explore its cobbled paths to gain insight into the city’s heritage, marvel at its architecture, or simply unwind in one of the dock’s many bars or restaurants.
The Basics
Albert Dock received its Royal title in 2018 in recognition of its maritime history. The former warehouses are now home to attractions such as The Beatles Story, where many Beatles tours visit as part of a comprehensive itinerary. City sightseeing tours also typically stop here, including hop-on hop-off services and bike tours. Learn more about the quay’s history at the Merseyside Maritime or International Slavery Museums, or discover the stand-up scene at Liverpool’s Comedy Central.
Things to Know Before You Go
How to Get There
Royal Albert Dock is 20 minutes’ walk from central Liverpool. The nearest station is James Street, served directly from Lime Street. The C4, C5, and Citlink buses also stop here. The dock also has a safe and secure car park, which charges an hourly fee.
When to Get There
Come rain or shine, there is always something to see on the quay. The museums close in the evening, though bars and restaurants remain open until late. Summer brings festivals and open air performances to the dock, while winter offers Christmas markets and festive decoration.
Significance of the Dock
At its opening in 1846, the Albert Dock was considered a revolutionary architectural feat. It was the first warehouse in Britain to be fireproof (meaning that it had no wooden parts). Made from brick, stone, and cast iron, the structure was also home to some of the first hydraulic cranes, used to move heavy cargo from the Far East. In its heyday of the early 19th century, 40% of world goods flowed through its ports.
Address: Albert Dock, Liverpool L3 4AD, England
Read MoreShow Less

297
See Liverpool by land and water on this enjoyable combo tour.  Take a River Explorer cruise along Liverpool’s UNESCO-listed waterfront, seeing the sights as the onboard commentary recounts their history. Plus, enjoy included entry to the U-boat Story, a museum dedicated to a War II German U-boat. Couple your cruise with a hop-on hop-off City Explorer open-top, double-decker bus tour. With your 24-hour pass, travel around must-sees such as St. George's Hall and Metropolitan Cathedral of Christ the King Liverpool, listening to the live commentary and hopping off at stops of interest.
...  More
From
US$23,96
From
US$23,96
Learn More

318
Maximize your time in Liverpool with a hop-on hop-off sightseeing cruise along the Mersey River. Aboard a colorful ‘dazzle ferry,’ pass main city attractions and disembark at any of the port stops to check out the sites up close. Admission to the U-Boat Story for a look at an authentic WWII German submarine is included.
...  More
From
US$14,64
From
US$14,64
Learn More

186
Delve into Liverpool’s vibrant culture on a Beatles and sightseeing walking tour, ideal for music lovers. Tick off top Liverpool attractions such as the decorated Mersey Ferries, the Museum of Liverpool, the 18th-century Liverpool Town Hall, and the brand new statue of Cilla Black outside of the Cavern Club, former stomping ground of The Beatles. Plus, visit spots associated with The Fab Four and watch a short Beatles documentary.
...  More
From
US$26,62
From
US$26,62
Learn More

17
Explore Liverpool's top sights on a comprehensive private guided tour. Personalize your itinerary around your interests and view everything from Beatles locations such as the Cavern Club to the city’s UNESCO-listed waterfront, the Royal Albert Dock, Liverpool Cathedral, Anfield football stadium, and more. Spend up to 7 hours exploring the city with hotel or port pickup and drop-off included.
...  More
From
US$126,44
per group
From
US$126,44
per group
Learn More

32
A fun and different way to see Liverpool! Solve satisfying clues and follow beautiful maps sent to your phones. Spot things other people take for granted! You’ll learn interesting facts and stories. Everything is outdoors and you can do social distancing.
...  More
From
US$15,96
From
US$15,96
Learn More

2
Our luxury V-class Mercedes is sanitised between tours and there is Hand Gel, masks and WIFi on board. I will explain how and why the city has changed in a lighthearted informative way and help you plan the rest of your day. There are very few licensed driver guides in Liverpool and no other Liverpool Qualified Guide has a V-class Mercedes. I am a Beatles expert, but I prefer to mix up the legacy left by the fab4 with the maritime history and the impact of the new waterfront buildings on the World Heritage Site. I will talk about the Georgian Quarter and the slave trade and you will visit the Victorian Round Reading Room and be driven through the world heritage site. My tours are family friendly and I will help you plan your day out and of course the rest of your visit after spending 3 hours with me.
...  More
From
US$332,73
per group
From
US$332,73
per group
Learn More

2
Using a local tour guide on a safe guided walking tour in the fresh Ari will let you explore the pedestrianised area in the docks and the heart of the city. You will learn and see far more than if you attempted to visit on your own and your local Liverpool Tour Guide will help you to plan the rest of your visit
...  More
From
US$19,96
From
US$19,96
Learn More

Discover one of the most stunning waterfronts in the world - Liverpool has a plethora of fantastic buildings and sights along the river Mersey. Explore the regenerated & stunning Royal Albert Dock with its internationally acclaimed museums and galleries. Experience the historic docklands brought to life by your knowledgeable and experienced guide. Gain a full understanding of how Liverpool became one of the largest ports in the world and how, after years of industrial decline, the city and waterfront has reinvented itself to become a culturally vibrant destination fit for the future. Your tour will include visits to two of the best museums in the region and your guide will introduce you to their highlights and share some exciting stories to enrich your experience along the riverside. Round everything off with a photo opportunity at the iconic Beatles Statue!
...  More
From
US$206,29
per group
From
US$206,29
per group
Learn More

4
Your guide Charlotte is one of the most qualified Beatles-specialist guides in the world, and is the only qualified guide to have a Masters Degree in The Beatles, Popular Music and Society. With over 20 years' experience of guiding, Charlotte's knowledge about The Beatles and the city of Liverpool is unrivaled, making this tour one of the most ideal and trust-worthy that you will find.
...  More
From
US$27,31
From
US$27,31
Learn More

34
Get to know Liverpool and see more sights in less time than you could on foot with this small-group bike tour. With a guide, pedal through the streets and enjoy photo stops at highlights such as the two Cathedrals, Albert Dock, and the Cavern Club, all while learning about Liverpool’s history. Ideal for day-trippers and weekend visitors who want to cover the sights in the shortest time possible, the tour includes a bike and helmet.
...  More
From
US$27,56
From
US$27,56
Learn More

This is the only bookable private 2 hour Liverpool by night tour in luxury transport for from 1 to 6 guests in your private group with stunning waterfront views from the opposite side of the River Mersey. We can meet you at your hotel and drop you off as you wish within Liverpool City centre. Face masks are available from your guide at a small additional cost and there is hand sanitiser gel in the luxury vehicle.
...  More
From
US$53,24
Price varies by group size
From
US$53,24
Price varies by group size
Learn More

The safety & health of our guests are always of paramount importance to us. Following the Coronavirus (Covid-19) pandemic of 2020, we are ensuring more policies are in place & adhered to during all our tours. Discover one of the most stunning waterfronts in the world - Liverpool has a plethora of fantastic buildings and sights along the river Mersey. Explore the regenerated & stunning Royal Albert Dock with its internationally acclaimed museums and galleries. Experience the historic docklands brought to life by your knowledgeable guide. Gain a full understanding of how Liverpool became one of the world's largest ports & how, after years of industrial decline, the city & waterfront have become a culturally vibrant destination fit for the future. Your tour will include visits to two of the best regional museums & your guide will introduce the highlights & share some exciting stories to enrich your experience. Round off with a photo opportunity at the iconic Beatles Statue!
...  More
From
US$226,25
per group
From
US$226,25
per group
Learn More

Join us for this half day tour of Liverpool, a beautiful city where plentiful history is surrounded by modern culture and sport. Let’s explore the city centre together and hear about some of the famous residents, past and present. Follow your private guide through the streets that scream the name of the words most famous pop group, The Beatles. Sports fans won’t be disappointed either, with a stop at the shop of one of football biggest clubs. Our tour winds its way around the City taking in the highlights, ending in the dock area. Just imagine a few hundred years ago many thousands of Europeans boarding ships bound for the New World. Today you will probably spot one of the many cruise liners dropping off passengers to enjoy this fantastic city!
...  More
From
US$227,90
Price varies by group size
From
US$227,90
Price varies by group size
Learn More