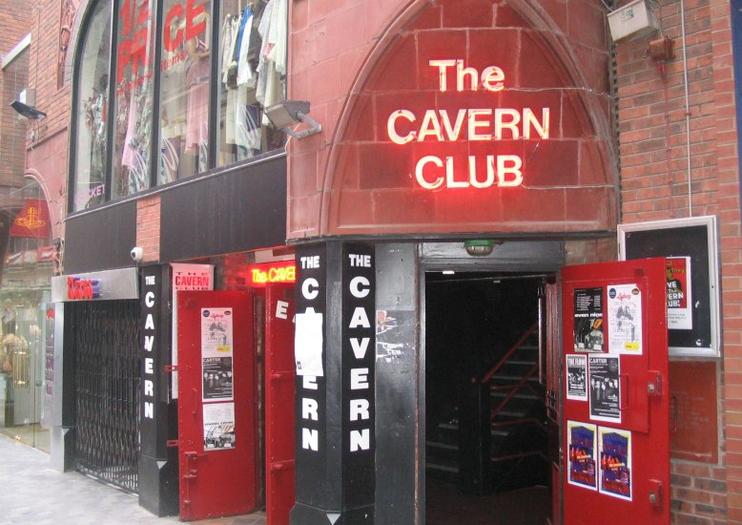 Famous as the stage where the Beatles made their debut in 1961, Liverpool’s Cavern Club has become a place of legend, hosting not only the Fab Four, but the Who, the Kinks, the Rolling Stones, Queen, Elton John, and many more household names. The influential club remains one of Liverpool’s top live music venues to this day.
The Basics
Beatles tours of Liverpool often make a stop at the legendary Cavern Club, and Magical Mystery Bus tour participants receive free entrance the evening of their tour. While Beatles fans are often content to enjoy a drink at the historic venue, the best way to experience the Cavern Club is to attend a gig. Live music performances take place daily at the main stage, the Cavern Live Lounge, and the Cavern Pub.
Things to Know Before You Go
How to Get There
The Cavern Club is located on Mathew Street in central Liverpool, a short walk from Albert Dock and the Beatles Story. The nearest train station is Liverpool James Street and the closest parking is at the Liverpool ONE shopping center, each a 5-minute walk from the venue.
When to Get There
The Cavern Club is open every day and night of the week, with later closing times Thursday to Saturday. From Monday to Wednesday, admission is free; on weekends arrive early to avoid the queues. Beatles fans should visit on a Saturday, when the Cavern Club Beatles perform a tribute to the iconic band.
History of the Cavern Club
Starting out as a jazz club in 1957, the Cavern Club became famous around the world thanks to the Beatles, who played almost 300 gigs there between 1961 and 1963 before becoming a global phenomenon. After the club’s 1960s heyday, it closed down in 1973 and was demolished. A new Cavern Club rose on the original site in the 1980s and has since become one of the most popular Liverpool venues of the 21st century, featuring acts such as Jessie J, Adele, Oasis, Arctic Monkeys, and even Sir Paul McCartney.
Address: 10 Mathew Street, Liverpool L2 6RE, England
Hours: Open daily
Read MoreShow Less

186
Delve into Liverpool’s vibrant culture on a Beatles and sightseeing walking tour, ideal for music lovers. Tick off top Liverpool attractions such as the decorated Mersey Ferries, the Museum of Liverpool, the 18th-century Liverpool Town Hall, and the brand new statue of Cilla Black outside of the Cavern Club, former stomping ground of The Beatles. Plus, visit spots associated with The Fab Four and watch a short Beatles documentary.
...  More
From
US$26,62
From
US$26,62
Learn More

17
Explore Liverpool's top sights on a comprehensive private guided tour. Personalize your itinerary around your interests and view everything from Beatles locations such as the Cavern Club to the city’s UNESCO-listed waterfront, the Royal Albert Dock, Liverpool Cathedral, Anfield football stadium, and more. Spend up to 7 hours exploring the city with hotel or port pickup and drop-off included.
...  More
From
US$126,44
per group
From
US$126,44
per group
Learn More

2
Using a local tour guide on a safe guided walking tour in the fresh Ari will let you explore the pedestrianised area in the docks and the heart of the city. You will learn and see far more than if you attempted to visit on your own and your local Liverpool Tour Guide will help you to plan the rest of your visit
...  More
From
US$19,96
From
US$19,96
Learn More

2
This Beatles Tour will take you on a day you'll never forget! If you visit Liverpool and you love the Beatles, this is a must for you. We will walk through all the memorable places with informative commentary. We will start at the Philamonic Dining Rooms made famous by Paul McCartney's appearance there for James Corden's carpool karaoke and was a regular haunt of the Fab Four. The story will continue along Hope Street at the art school where John went next to the Liverpool institute Paul and George attended. We will wend our way into the city centre using the route they used passing the locations that played a part in their meteoric rise to fame, Le Ye Cracke, The Blue Angle, The Jacaranda and others until we reach Mathew Street and the world famous Cavern Club. All told with an indepth continuity and wit. The Liverpool Pillharmonic in Hope Street is our meeting point. Don't miss this opportunity to visit the most emblematic attractions of the city.
...  More
From
US$30,56
US$37,27
US$6,71 savings
From
US$30,56
US$37,27
US$6,71 savings
Learn More

34
Get to know Liverpool and see more sights in less time than you could on foot with this small-group bike tour. With a guide, pedal through the streets and enjoy photo stops at highlights such as the two Cathedrals, Albert Dock, and the Cavern Club, all while learning about Liverpool’s history. Ideal for day-trippers and weekend visitors who want to cover the sights in the shortest time possible, the tour includes a bike and helmet.
...  More
From
US$27,56
From
US$27,56
Learn More

4
Your guide Charlotte is one of the most qualified Beatles-specialist guides in the world, and is the only qualified guide to have a Masters Degree in The Beatles, Popular Music and Society. With over 20 years' experience of guiding, Charlotte's knowledge about The Beatles and the city of Liverpool is unrivaled, making this tour one of the most ideal and trust-worthy that you will find.
...  More
From
US$27,31
From
US$27,31
Learn More

Full Day In Liverpool With A Local: Private & Personalized

Knowing the best spots to visit in a new city can be difficult. Make the most of your time in Liverpool with a full day’s private tour, delivered by a local host. Enjoy a personalized itinerary based on your interests and your host’s insights, and discover attractions off the beaten track, hand-picked to suit you.
...  More
From
US$139,75
Price varies by group size
From
US$139,75
Price varies by group size
Learn More

Liverpool History and Culture Audio Tour: Rock out along the River Mersey

This self guided audio tour will take you on a winding path through Liverpool city centre where you will discover much of its fascinating history and culture. Described as one of the finest neo-classical buildings in the world, you’ll start at Liverpool’s magnificent St George’s Hall. From there you enter the city centre to follow the trail of the ancient pool. Here you will learn of the controversial reasons behind the transformation of Liverpool from a tiny fishing village into one of the world’s greatest seaports. You’ll get answers to some fascinating questions along the way too, including: • Why are more than 100 Frenchmen buried in the city centre’s most beautiful gardens? • Why is Liverpool called Liverpool? • Why is the Cavern Club not the Cavern Club? (You did read that right) • What happened to Liverpool Castle?
...  More
From
US$5,00
From
US$5,00
Learn More

1
Liverpool sure packs a punch when it comes to exciting things to do! You’ll join one of our local Liverpool hosts and experience the city’s quirky street food markets, impressive sights and hidden charm. Whether you have just three hours to spare or a full day to play, your host will create an itinerary based on your schedule and interests. From exploring cruising down the Mersey and exploring the Royal Albert Dockto sipping cocktails on rooftops, eating at industrial style street food markets and galleries like Tate Liverpool- adventure awaits. Within 24 hours after booking you'll receive a short questionnaire about your personality and interests. Based on your responses, you'll be assigned a like- minded host. Your host will communicate with you directly to suggest an itinerary to help you discover what makes the city unique. You will also agree on a meeting time and place. Your itinerary is flexible, so during the experience, you can always change your mind about what you want to do
...  More
From
US$79,85
Price varies by group size
From
US$79,85
Price varies by group size
Learn More

Join us for this half day tour of Liverpool, a beautiful city where plentiful history is surrounded by modern culture and sport. Let’s explore the city centre together and hear about some of the famous residents, past and present. Follow your private guide through the streets that scream the name of the words most famous pop group, The Beatles. Sports fans won’t be disappointed either, with a stop at the shop of one of football biggest clubs. Our tour winds its way around the City taking in the highlights, ending in the dock area. Just imagine a few hundred years ago many thousands of Europeans boarding ships bound for the New World. Today you will probably spot one of the many cruise liners dropping off passengers to enjoy this fantastic city!
...  More
From
US$227,90
Price varies by group size
From
US$227,90
Price varies by group size
Learn More