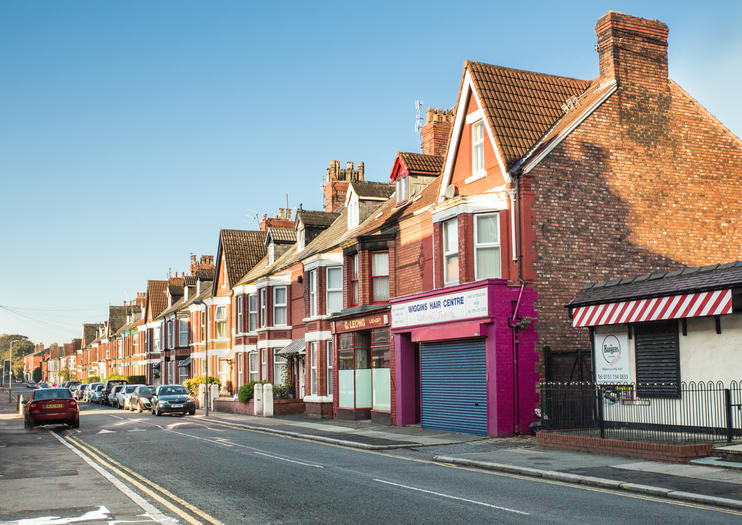 Made famous by the Beatles song, Penny Lane is lined with shops and small businesses. Before the Beatles hit the big time, John Lennon and Paul McCartney used to catch the bus from here. Some of the places name-checked in the lyrics—such as the shelter in the middle of the roundabout and the barbershop—can still be seen today.
The Basics
Penny Lane is a popular pilgrimage site for Beatles fans who come to see the real-life inspiration behind the English band’s 1967 hit. Visitors often go as part of Beatles tours of Liverpool, which typically take in other sights associated with the Fab Four, such as The Beatles Story, The Cavern Club, and Strawberry Field. Penny Lane also features as part of multi-day tours of Liverpool and Manchester from Bournemouth and Brighton.
Things to Know Before you Go
How to Get There
Penny Lane is situated in the Mossley Hill area of Liverpool, England. Several regular bus routes, including the 75, 80, 80A, 86, 86A, and 86C, all run from the city center to stops near Penny Lane.
When to Get There
Penny Lane is best seen on a sunny summer day, when you can take your time people-watching. Avoid traveling there during morning and afternoon rush hours (around 7:30–9:30am, and 5–6:30pm) as traffic can be bad at this time.
Following the Beatles Trail in Liverpool
Penny Lane is just one of numerous Beatles sights in Liverpool. Fans of the Fab Four may also want to check out Strawberry Field, the site that inspired one of the band’s biggest hits; The Beatles Story on Albert Dock, whose memorabilia-packed exhibitions track the band’s rise to fame; and the Casbah Coffee Club, where The Quarrymen—an early Ringo-free lineup of the band—played many of their early gigs.
Address: Penny Lane, Liverpool L18, England
Read MoreShow Less

41
Liverpool is famous around the world as the home of the Beatles and the city is full of sites relating to the Fab Four. On this tour, discover the city’s musical legacy with a private guide and learn all about the group’s rise to global stardom. Along the way, see landmarks immortalized in the band’s songs such as Penny Lane and Strawberry Field, visit Eleanor Rigby’s grave, and see the childhood homes of John, George, Paul and Ringo.
...  More
From
US$153,09
per group
From
US$153,09
per group
Learn More

58
A bespoke Beatles Tour across Liverpool, in a unique John Lennon Rolls Royce themed electric taxi cab. As a one man company we guarantee that you will receive a personal service and contact from the owner Ian from your initial booking and ongoing contact. All tours are conducted by Ian giving you the assurance that you will experience the same high standard as that mentioned by all our customers in their reviews on TripAdvisor. The zero emissions vehicle benefits from a separate passenger compartment, air conditioning,and free WiFi
...  More
From
US$119,81
per group
From
US$119,81
per group
Learn More

Travel safely in a sanitised luxury vehicle in this private tour for your own group from 1 to 6 guests. Avoid the risk of travelling in a motor coach in this private tour to learn all about the Beatles locations in the south of the city centre, Penny Lane, Strawberry Field, outside the Beatles childhood homes and lots more. You will also have a short guided tour of the city centre in luxury transport and as it is a private tour your guide can meet you at your preferred location anywhere in Liverpool City Centre. If you want to learn about all the Beatles locations within the city centre then there is the option to add a 2-hour socially distanced walking tour from the waterfront to William Brown Street. Your qualified Tour Guides and Driver/Guides will have hand sanitiser and there are face-masks available at a small additional charge if you require those. After your tour your local tour guide will help you to plan the rest of your visit avoiding the busiest locations.
...  More
From
US$82,00
per group
US$86,53
US$4,53 savings
From
US$82,00
per group
US$86,53
US$4,53 savings
Learn More