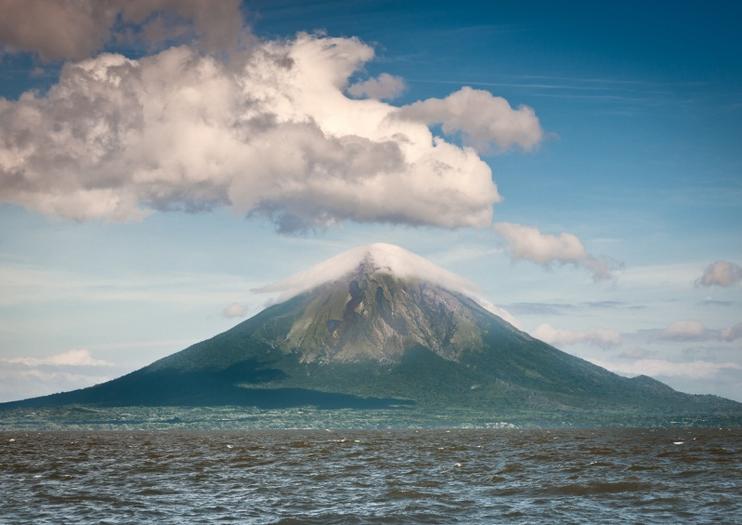 A trip to Lake Managua (Lake Xolotlán, or Lago Xolotlán) is more about lakeside vistas than the (polluted) water. A quick jaunt from Managua’s city center rewards visitors with views of the towering Momotombo Volcano, as well as a glimpse into Nicaragua’s efforts to clean up and revamp its environmental attractions.
The Basics
Perched in a crater 128 feet above sea level and mere miles from the Pacific Ocean, Lake Managua fronts Nicaragua’s capital city and a number of other towns dotting its banks. Though the lake’s waters are infamously polluted due to a nearly century-long practice of emptying city sewage and other waste into the water, recent efforts have been made to restore the lake’s health and beauty—and amp up its visitor appeal. The malecón (waterfront) area was dredged and cleaned in 2007, resulting in significantly less-polluted shores, while a small ferry company recently began operating a sightseeing cruise across the water. Take a ride for unbeatable views of Momotombo Volcano and the Managua city skyline. Or drive past the lake on a Managua city sightseeing tour, keeping watch for the colorful wooden fishing boats dotting the lake’s waters.
Things to Know Before You Go
How to Get There
Lake Managua is most easily reached from Managua itself, which sits perched on the lake’s southwestern shore. Take a taxi to the lake or make the quick drive, about a 20-minute trip from Mangua’s city center.
When to Get There
The lake is an outdoor attraction open year-round, with its highest water levels occurring during the rainy season. Plan to visit Tuesday through Sunday for a chance to take a sightseeing cruise.
Nicaraguan Lake Relations
The small Tipitapa River connects Lake Managua to its larger and more pleasant neighbor of Lake Nicaragua, one of the largest lakes in Central America. However, a waterfall on the Tipitapa blocks the migration of Lake Nicaragua’s famous population of bull sharks into Lake Managua’s waters.
Address: Managua, Nicaragua
Read MoreShow Less

Things to do near Managua