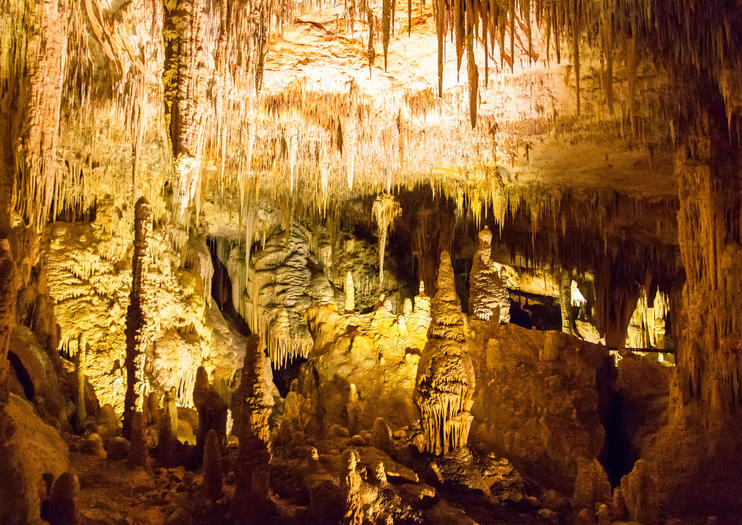 Hidden away in an ancient marri forest and dripping with stalactites and stalagmites, Mammoth Cave is a mesmerizing sight. The limestone cave is one of the largest in the Margaret River region, located in Western Australia’s Leeuwin-Naturaliste National Park.
The Basics
Uncover Mammoth Cave’s fascinating history on a self-guided audio tour, following the boardwalk circuit through the 1,640-foot-long (500-meter) cavern. Highlights of the cave include unique rock formations like the Karri Forest Flowstone and the Mammoth Shawl, all dramatically illuminated by slats of natural light. The cave also boasts fossilized remains of animals from 35,000 years ago.
Day tours of the Margaret River region from Perth often include a visit to Mammoth Cave alongside regional attractions such as the Busselton Jetty, Cape Leeuwin Lighthouse, or wine tasting at the Margaret River wineries. Combination tickets are available for Mammoth Cave, Jewel Cave, Lake Cave, and Cape Leeuwin Lighthouse.
Things to Know Before You Go
How to Get There
Mammoth Cave is located in Forest Grove, around 9 miles (4 kilometers) southwest of the town of Margaret River—about a 15-minute drive. There’s no public transportation to the cave, so you’ll need your own vehicle or to join a guided tour.
When to Get There
The cave is open daily all year-round. The busiest time to visit is during the summer months of January and February, when an early-morning or late-afternoon visit is best for avoiding the crowds.
Archaeological Finds at Mammoth Cave
It’s not just the striking topography that draws the crowds to Mammoth Cave. The cave hit headlines in the early 1900s when archaeologists uncovered the fossilized remains of ancient Australian megafauna, including Tasmanian tigers and giant kangaroos, that have been extinct for thousands of years.
Address: Caves Road, Forest Grove WA 6285, Australia
Admission: Varies
Read MoreShow Less

167
Explore southwestern highlights on this diverse full-day tour to the Margaret River winemaking region from Perth. Along the way, visit the record-setting Busselton Jetty and Cape Leeuwin Lighthouse, where the Indian and Southern Oceans meet. Enjoy a platter lunch and cider samples at a boutique brewery, and stop at a historic winery to taste the region’s renowned vintages. You also learn about the area’s ancient geologic history as you wander through the magnificent formations of Mammoth Cave.
...  More
From
US$151,47
From
US$151,47
Learn More

This tour starts with you being taken to one of the wonders of Margaret River. Caves have always been a fascination for most of us, and on this tour you descend into Lake Cave, first discovered in 1867. After your adventure in the caves you can sample wines at the famed Voyager Estate cellar door, after your tastings we take you to where you will be treated to a 5-star lunch menu at Leeuwin Estate. After lunch we will take you to some of the best boutique wineries and foody outlets this wonderful region has to offer. This tour is fun, busy, exciting… and most of all, great value.
...  More
From
US$133,68
From
US$133,68
Learn More

Things to do near Margaret River