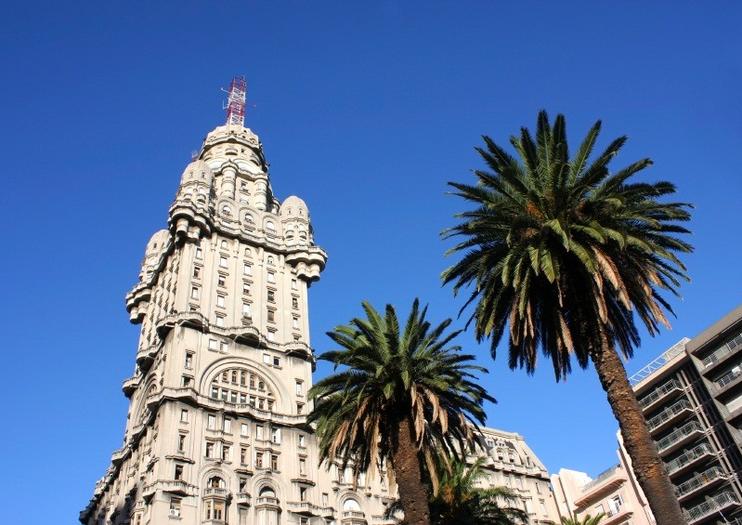 Completed in 1928, Salvo Palace (Palacio Salvo) is a historical landmark building featuring an eclectic architectural style—predominantly Italian Gothic, with classic and neo-romantic influences. Originally planned as a hotel, it is now an office and apartment building.
The Basics
Salvo Palace was once one of the tallest buildings in South America. Standing at 312 feet (95 meters), its remains a city symbol thanks to its distinctive design. To see the building’s exterior, visit independently or take a sightseeing tours of Montevideo, such as a walking tour of Old Town (Ciudad Vieja). For access to the 10th floor rooftop and 25th floor of the building, join a  guided tour leaving from the lobby.
Things to Know Before You Go
How to Get There
Salvo Palace is in the heart of Montevideo, at the intersection of Plaza Independencia and 18 de Julio Avenue. It’s a short walk of many centrally located Montevideo hotels and attractions including Teatro Solis. The ferry terminal is about 1 mile (1.6 kilometers) away for about a 20-minute walk.
When to Get There
Guided tours to the viewing deck and rooftop typically run in late morning and early afternoon in  summer. For sparkling views, prebook the nighttime tour, which also takes you to additional corners of the building and relates stories about its history.
Tango Museum
Salvo Palace was built on the site where Gerardo Matos Rodríguez wrote La Cumparsita, probably the most recognizable tango in the world, in 1917. You can learn about the history of tango and watch a show inside the building.
Address: Intersection of 18 de Julio Avenue and Plaza Independencia, Montevideo, Uruguay
Read MoreShow Less

2
This iconic skyscraper of the city of Montevideo has been a historical and cultural emblem, throughout its almost 100 years of existence many characters have passed through its corridors and some apparently still in them, this tour invites the visitor to know the hidden side of this concrete giant. A unique experience surrounded by mystery, alchemy and secrets that are born with the Salvo brothers and apparently did not die with them.
...  More
From
US$18,93
From
US$18,93
Learn More

66
Get an introduction to Montevideo, the capital city of Uruguay, on a 3-hour city sightseeing tour — perfect for those short on time. Travel by coach with your knowledgeable guide, and step off the bus to view prominent landmarks around Independence Plaza and other city hot spots. See Parliament Palace; venture into the residential barrios of Carrasco, Punta Gorda and Pocitos; and stroll along the coastal avenue, Rambla of Montevideo. Round-trip hotel transport included.
...  More
From
US$32,62
From
US$32,62
Learn More

The Best of Montevideo (Private Service)

37
Private and Personalized City Tour in Montevideo 3 Hours Languages: Spanish, Portuguese, English Enjoy your stay in the best way. You will tour the capital of the country visiting the Plaza Independencia, Gral. Artigas Mausoleum, Legislative Palace and Monument to the Carretas. You will know the Centenario stadium, home of the first soccer world championship. You will enter the old city through its streets, Plaza Matriz, Catedral and Puerta de la Ciudadela. The walk through its extensive Rambla and the expected photo in the Montevideo Sign is essential. You will also know the Agricultural Market and Market of the Port enjoying its great gastronomic offer.
...  More
From
US$76,93
Price varies by group size
From
US$76,93
Price varies by group size
Learn More
Reserve Now & Pay Later
We'll reserve your spot today, and you can cancel up to two days* before your experience without making a payment. Secure your spot with ease, stay flexible, and never miss out.
How it works
Find your experience
Choose the experience you want knowing you can secure your spot without being locked in.
Make a reservation
Reserve now and pay later to secure your spot, commitment-free.
Choose when to pay
Come back to pay once your plans are set, or let auto-pay kick in two days* before your experience.
Enjoy your experience
Now you're all set! Have a great time.
Frequently Asked Questions  | Terms & Conditions
*Up to 9 days depending on the booking/product
Reserve Now & Pay Later
Secure your must-do activities without being locked in
Learn More

3
Tour in a specific city or region of Uruguay, safe and comfortable car transport with internet connection and cell phone charging point. The start and end time of the route will be defined by the client depending on their interests. The sites to visit are planned after the client evaluates our offer of options. The duration of the City Tour is flexible, being able to last between 3 hrs. to 6 hrs. In most cases. The start time is defined in agreement with the client. For trips to distant cities it is recommended to start early in the morning.
...  More
From
US$125,00
per group
From
US$125,00
per group
Learn More

Ramble through Montevideo's culture and history with this audio walking tour

Take a walk with Alberto Rodriguez, a historian from New York who'll tell the story of Montevideo's Old City. He'll uncover its most colourful decades, from the 1870s through to the roaring 1920s, when there was rapid development here, led by a diverse group of industrialists. Behind today's facades, you'll find bawdy entertainment, exciting sports and a cast of fascinating characters.
...  More
From
US$5,20
From
US$5,20
Learn More

Explore the Old City with a guide who'll let you in on what makes this place special. Behind the facades, you'll hear stories, bawdy entertainment, exciting sports and a cast of fascinating characters. Once you've downloaded the tour, you can head to the famous Port Market where we will start. Don't worry if there is WiFi or not, because the audio tour works regardless with your phone's GPS signal. Just put your phone in your pocket, forget about it, and let the audio tour guide you as it gives you directions and plays at exactly the right time and place. Take a stroll around the beautiful old city. The walk takes about an hour, but you can stop at any point along the way. Discover the symbolism of the Palacio Salvo at the end of the tour.
...  More
From
US$5,26
From
US$5,26
Learn More

21
Hi there! We are the first Free Walking Tour of Uruguay and we want to invite you to be part of our fun and informative tour of Montevideo. We are a local company who are in love with the city and we want to show you the best in the best way, walking! Our main tour is a walk of approximately 2.30 hours, through the Old City of the capital. There you will know the most important details of our history, culture and society.
...  More
From
US$5,00
From
US$5,00
Learn More

I think that I am able to provide a lively historical review of the Old City. Many who come to Uruguay, arrive via Cruise liners and I believe that throughout the 2 and half hours that I show them around, that they have fallen a little in love with the city. The Old City has a lot of history waiting to be uncovered, as a guide I am there to reveal that while we walk around, we are also walking around with the past.
...  More
From
US$35,00
From
US$35,00
Learn More

Things to do near Montevideo