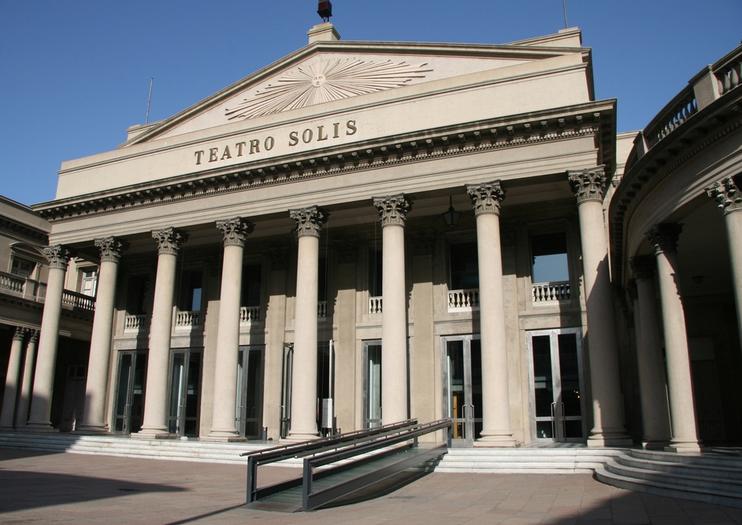 Opened in 1856, Solís Theatre is a longtime cultural touchstone in Uruguay. Visit the theater to see opera, ballet, theater, and classical music performances. Even if you don't attend a show, stopping by to view the neoclassical building, designed by Italian architect Carlo Zucchi, is a must-do in Montevideo.
The Basics
To get an overview of Solís Theatre, book a walking tour of Montevideo, especially one focused on the Ciudad Viejo (Old Town), which usually includes a stop at the theater. For a closer look inside without a ticket to a performance, join a guided tour of the theater. Tours of Solís Theatre provide historical and architectural background while taking you behind the scenes to see rooms and spaces, including the main stage.
Things to Know Before You Go
How to Get There
Solís Theatre is located in the center of Montevideo on Plaza Independencia. It’s within walking distance of most centrally located hotels and attractions, including Salvo Palace. The ferry terminal is less than 1 mile (1.4 kilometers), or about a 20-minute walk, and Buenos Aires bus station is less than a block away.
When to Get There
Check the theater’s website for up-to-date information on performance times. Guided tours typically run in the late morning and late afternoon, Tuesday through Sunday. Tours usually last two hours.
Plaza Independencia
While on Montevideo's largest downtown plaza, check out landmarks such as the statue of independence hero José Artigas, after whom the plaza is named, and the Mausoleo de Artigas, where Artigas is interred. Other notable structures include the stone Puerta de la Ciudadela (Gateway of the Citadel), one of the last remaining sections of wall that surrounded the oldest part of the city, and Palacio Salvo, once the continent’s tallest building and still a Montevideo landmark.
Address: Montevideo, Uruguay
Admission: Varies
Read MoreShow Less

Guided tour of the Solis Theater with Transfers

1
We invite you to learn about the history of the iconic theater, home of the performing arts of Montevideo. In this experience, the client will be accompanied by a qualified guide at all times while discovering the secrets of one of the city's cultural jewels.
...  More
From
US$22,00
From
US$22,00
Learn More

The Best of Montevideo (Private Service)

37
Private and Personalized City Tour in Montevideo 3 Hours Languages: Spanish, Portuguese, English Enjoy your stay in the best way. You will tour the capital of the country visiting the Plaza Independencia, Gral. Artigas Mausoleum, Legislative Palace and Monument to the Carretas. You will know the Centenario stadium, home of the first soccer world championship. You will enter the old city through its streets, Plaza Matriz, Catedral and Puerta de la Ciudadela. The walk through its extensive Rambla and the expected photo in the Montevideo Sign is essential. You will also know the Agricultural Market and Market of the Port enjoying its great gastronomic offer.
...  More
From
US$76,93
Price varies by group size
From
US$76,93
Price varies by group size
Learn More
Reserve Now & Pay Later
We'll reserve your spot today, and you can cancel up to two days* before your experience without making a payment. Secure your spot with ease, stay flexible, and never miss out.
How it works
Find your experience
Choose the experience you want knowing you can secure your spot without being locked in.
Make a reservation
Reserve now and pay later to secure your spot, commitment-free.
Choose when to pay
Come back to pay once your plans are set, or let auto-pay kick in two days* before your experience.
Enjoy your experience
Now you're all set! Have a great time.
Frequently Asked Questions  | Terms & Conditions
*Up to 9 days depending on the booking/product
Reserve Now & Pay Later
Secure your must-do activities without being locked in
Learn More

Ramble through Montevideo's culture and history with this audio walking tour

Take a walk with Alberto Rodriguez, a historian from New York who'll tell the story of Montevideo's Old City. He'll uncover its most colourful decades, from the 1870s through to the roaring 1920s, when there was rapid development here, led by a diverse group of industrialists. Behind today's facades, you'll find bawdy entertainment, exciting sports and a cast of fascinating characters.
...  More
From
US$5,20
From
US$5,20
Learn More

21
Hi there! We are the first Free Walking Tour of Uruguay and we want to invite you to be part of our fun and informative tour of Montevideo. We are a local company who are in love with the city and we want to show you the best in the best way, walking! Our main tour is a walk of approximately 2.30 hours, through the Old City of the capital. There you will know the most important details of our history, culture and society.
...  More
From
US$5,00
From
US$5,00
Learn More

4
POST ON CULTURAL PHOTOGRAPH TOUR BY THE OLD CITY + TOURIST AUDIOGUIDE. Alone, in love, friends or family ... Follow me on my photo tour and know many stories with my original Audioguide, I will take MANY photos, posing in incredible places of the Old City and you can even get to know places as we move without stopping in them. We will make stops to take many photographs, you will be posing in different emblematic places of the city (more than 30 tourist and another not so much being hidden), in less than 2 hours, you will have been in as many places as possible, my intention is that you can be professionally portrayed in places and the way you could never do it on your own. In addition they will not only be photographs as you can take, they will be photos with professional edition and post-production as if you were a professional model. It doesn't matter your age, your physical appearance or your ease of posing in front of a camera. IMPORTANT: - We will always be small groups, the photos are private, they will never be mixed with other people in the group. - The delivery of all the photos are unlimited, whether 50, 100 or 200 are within the rate, there will be no payments or extra costs ever. FREE. You can download our APP Audioguide for our tour in your language, which will be a fundamental factor for the activity and enrich knowledge while we move around the city. To download, I will send you the link with the guide for iOS, Android and Windows Mobile. - I will use my Nikon Camera with Tripode in necessary places, where I will use for photo shoots, there will be no need for selfies! - PROFESSIONAL EDITION to the photos, without a doubt they will make you look like a professional model without selfies, these will be delivered in the next days in your mail. I am a landscape photographer, I have long dedicated myself to photo reporting and portrait photography. In another of my qualities, I can emphasize that I like to travel around the city and do what I know and like, that the visitor takes the photographic record forever where he does not access with agencies. What is the difference, of a selfie in a tourist place, with a common cell phone? Simple, not only will you have a photograph, but it will have the professional edition and I will deliver unlimited photos, making not only that the image is taken in the most emblematic places, but I will also turn you into a professional model without being it.
...  More
From
US$24,99
From
US$24,99
Learn More

1
It is interesting to visit the most beautiful place in Montevideo with a photographer who will make you some excellent photos, being very important the human warmth that I offer you. If you have ever worried about the photos, it should not be a concern this time, since everything will flow naturally, spontaneously and according to your style according to your particular tastes, listening to any suggestion you can make. On the other hand, a particular or group photo session is really expensive, especially if from the hand of a professional with a university degree in photography and an excellent portfolio and in this case it is not so, because my slogan is, Have the best possible job at the lowest possible price for a photo session of the highest level, you can add me on Instagram to @ alforch33 and see my work in more detail if you want, and talk to me over there and coordinate everything.
...  More
From
US$37,95
From
US$37,95
Learn More

Photos and tour of downtown Montevideo

I love to photograph the travelers who come to Montevideo, so they can take a nice memory of this city. With this tour you will not only get the photos, you will also enjoy a fun and interesting tour, so that when you see each photo you remember a little the history and culture of the place where you have been and the most striking curiosities of this beautiful country.
...  More
From
US$32,00
From
US$32,00
Learn More

47
See the top attractions of Montevideo on a private shore excursion with your very own guide. You’ll visit several coastal barrios, stroll the Rambla of Montevideo —  a coastal esplanade — and view historic landmarks in the capital such as Independence Plaza, Constitution Square and Parliament Palace. Along the way, learn about Montevideo history, architecture and culture. Opt to extend your half-day excursion with a winemaking tour at a local vineyard and a tasting of Uruguay’s award-winning tannat wine.
...  More
From
US$145,30
Price varies by group size
From
US$145,30
Price varies by group size
Learn More

Things to do near Montevideo