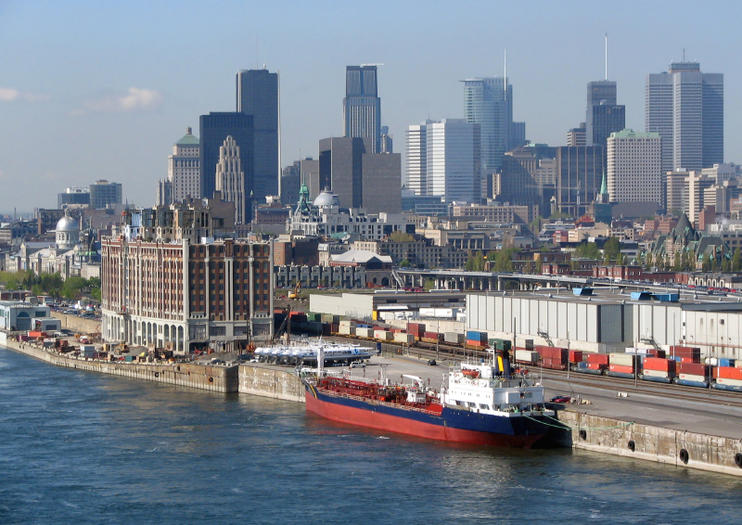 Among Canada’s largest inland ports, the Port of Montreal (Port de Montréal) sits on the St. Lawrence River, and is home to the Iberville Passenger Terminal, where cruises dock. The port is the gateway to Montreal, the country’s second largest city, located in the francophone Quebec province, offering easy access to Old Montreal (Vieux-Montréal) and wider downtown area.
The Basics
Travelers find the Iberville Passenger Terminal of the Port of Montreal on the edge of Old Montreal, the historic core of the city that is known for its European-style architecture, cobblestone streets, and sidewalk cafés. Passengers disembarking here can join guided walking tours of the historic old town, which cover top sights such as Place d’Armes, Notre-Dame Basilica, Place Jacques-Cartier, and Rue Saint-Paul.
Sightseeing tours by hop-on hop-off bus or car allow visitors to explore beyond the old town area, stopping at destinations including Chinatown, Mount Royal Park (Parc du Mont-Royal), and St. Joseph’s Oratory of Mount Royal.
Things to Know Before You Go
How to Get to Montreal from the Montreal Cruise Port
The Iberville Passenger Terminal is situated on Alexandra Quay in the Old Port (Vieux-Port) area of the city. The port is centrally situated, leaving passengers within easy strolling distance of Old Montreal and all its historical attractions. Taxis are also available for those traveling farther afield.
Port Information
The terminal is well-equipped with visitor-friendly facilities, including public restrooms, left luggage, and tourist information desks. Wi-Fi is also available at the cruise terminal. Though French is the official language of Montreal and the province of Quebec, English is widely spoken.
Address: 2100 Avenue Pierre Dupuy, Montreal, Quebec H3C 3R5, Canada
Read MoreShow Less

Things to do near Montreal