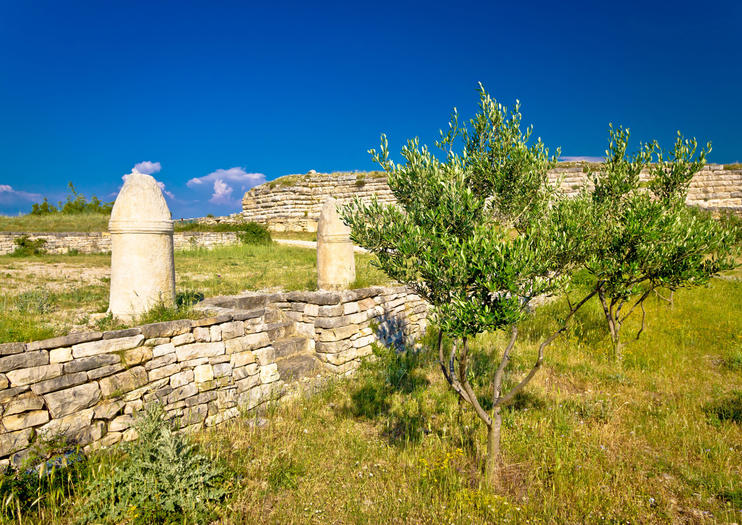 The town of Zagora is located in Morocco's Draa River Valley, in the southeastern part of the country near Mount Zagora in the Little Atlas Range.
The main attractions in Zagora are the remains of an 11th century Almoravid fortress on Mount Zagora and the sign at one end of town that indicates that it would take 52 days to reach Timbuktu by camel or on foot. You can take camel treks from Zagora, or hike up into the mountains. There is a colorful and bustling market on Wednesdays and Sundays.

It takes about eight hours by bus to reach Zagora from Marrakesh. Near Zagora, the town of Tamegroute is an important Sufi center (there is an ancient library there), and is known for a particular kind of green pottery.
Address: Zagora, Morocco
Read MoreShow Less

7 Tours and Activities to Experience Zagora

4
Getting to the kasbah of World Heritage–listed Ait-Ben-Haddou takes you through the High Atlas Mountains, best traversed with a guide. This 2-day journey includes tours in the towns of Zagora and Ouarzazate, with an overnight camp in the Sahara Desert reached by camel. Relax with convenient round-trip transport from Marrakech.
…More
From
US$295,76
Price varies by group size
From
US$295,76
Price varies by group size

1
Take a private tour and enjoy the VIP treatment. Your own guide, fully qualified and accredited, will allow you to experience Ouarzazate in the best possible way. Discover the magnificent Atlas Mountains to enjoy Morocco's most beautiful deserts. In an air-conditioned van, see ogle canyons, palm groves and mountain villages. Our private day tours and activities will allow you to enjoy the beauties of morocco - and have a really lovely day !. Our Cars and Vans are ready to give you a ride. TRIP HIGHLIGHT: - Drive along the High Atlas Mountains and Tizi n Tichka. - Cross the Mountain Berber villages and enjoy the beautiful nature. - Guided tour in Kasbah Ait Ben Haddou - Visit Ouarzazate with its movie studio and Kasbah Taourirt
…More
From
US$283,93
From
US$283,93

6
e discover the Drâa Valley: it is the longest valley in Morocco. The ksours * and kasbahs * rammed earth will mark our progress along the wadi. Born in the Atlas, not far from Ouarzazate, the Draâ feeds from Agdz to Mhamid an oasis for nearly 200 km. The landscape reveals along the wadi a multitude of fields, very dense palm groves forming a discontinuous ribbon along the valley up to Agdz. From Agdz to Ouarzazate the landscape is transformed becoming over the last 70 km almost exclusively mineral, crossing the Jbel Tifernine, eastern foothills of the Anti-Atlas, region of bare mountains and extraordinary cliffs
…More
From
US$141,16
Price varies by group size
From
US$141,16
Price varies by group size

Ideal for those who are short on time, this 3-day Sahara desert tour from Marrakech includes an overnight stay in a Berber tent, a camel ride across the dunes, and a visit to the village of Taznakht to watch how Berber carpets are made. The trip ends with a return drive back to Marrakech through the High Atlas Mountains.
…More
From
US$567,86
From
US$567,86

Night in the desert

2
You will discover Morocco in a completely personalized and intimate way. We take care of you from the beginning to the end of the circuit.
…More
From
US$251,12
From
US$251,12

1
Go deep into the Moroccan Sahara on a 4-day, private tour from Marrakech, and discover mountain kasbahs, gorges and a stunning desert landscape. Explore the fortified cities of Ait-Ben-Haddou and Ouarzazate then slip into valleys filled with blooming roses and rustling palm groves; head off-road into a rugged mountain landscape, discover remote Berber communities and glimpse holy texts at a remarkable library. Ride a camel into the Saharan sunset and sleep in a nomadic camp before returning to Marrakech through acacia groves, high plateaus and a serenely isolated desert lake.
…More
From
US$514,67
From
US$514,67

Things to do near Morocco Sahara