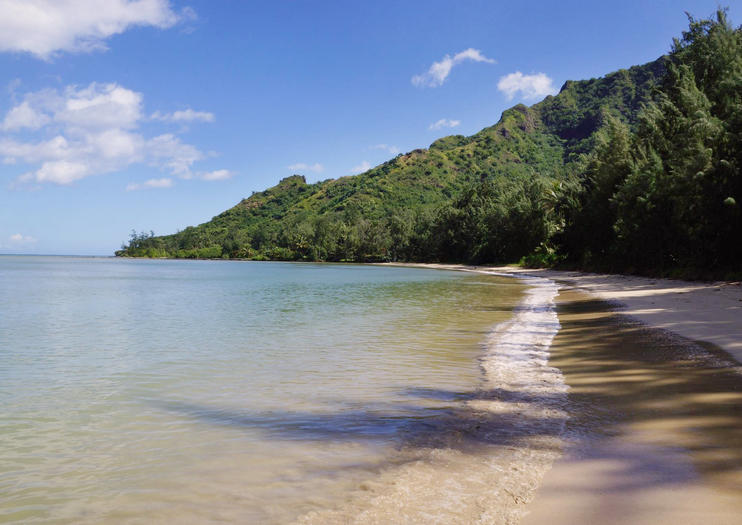 Pre-contact Hawaiians didn’t believe in land ownership, but they did divide the Islands into sectional slivers called ahupua’a. Running from the mountains to the sea, ahupuaa had enough land and water resources to support a whole community, and the 5,300 acre Ahupua’a ‘O Kahana State Park is one of the few statewide divisions that remains intact and managed as a whole. Surrounded on three sides by the verdant Koolau Mountains, and fronting Kahana Bay, the scenic park includes a dusty neighborhood of mostly ethnic Hawaiian residents, two popular jungle hiking trails —Kapa’ele’ele and the Nakoa Loop—leading back into a deep valley, the remnants of an ancient fishpond and a beach park with year-round camping.
Most visitors, drawn by its forested seaside park and calm tropical waters, stop by the here to snap photos enroute to the North Shore. The bay is very shallow and can be murky thanks to the nearby infusion of Kahana Stream, so swimming is not recommended. Instead, the best parts of this park are both scenic and cultural: Visit the rocky, circular remains of the ancient Huila Fishpond on the eastern side of the bay, or head into the park to speak with residents. The 31 families that live here share responsibilities and assist with interpretive programming. The volunteer-staffed orientation center will help guide you toward the hiking trailheads that navigate Kahana Valley, former site of kalo loi (taro terraces), au’wai (channeled irrigation streams), heiau (temples) and later, during WWII, jungle warfare training.

The orientation center with trail-maps, information and restrooms is visible a short drive into the park, but before the neighborhood houses. Makai (seaside) facilities include include picnic tables, restrooms and showers, but, note there are no lifeguards at Kahana Bay. 10 beach campsites are available by advance permitting only ($18 per campsite of up to six per night for non-residents; permits available via camping.ehawaii.gov).
Address: 52-222 Kamehameha Highway, Hauula, Oahu 96717, USA
Read MoreShow Less

4
Explore the spectacular North Shore in the early morning hours, this wonderful tour specializes in discovering all the stunning emerald color water & white sand beaches of North Shore, includes a free photo session!
...  More
From
US$119,95
From
US$119,95
Learn More

53
This comprehensive tour of Oahu hits many of the island’s most iconic locations such as the Dole Plantation, Waimea Valley, Shark's Cove, Byodo-In Temple, Halona Blowhole, and more. You’ll also visit several beaches where you’ll have time to take photos. Along the way, sample tropical fruit, macadamia nuts, coconut water, and other island fare.
...  More
From
US$149,95
From
US$149,95
Learn More

3
Combine the convenience of a tour with the flexibility of self-guided exploration. This GPS tour app lets you explore O'ahu at your own pace, taking in the most scenic spots, as well as some off-the-beaten-path gems. At a fraction of the cost of a tour, it also saves you money.
...  More
From
US$9,99
per group
From
US$9,99
per group
Learn More
Reserve Now & Pay Later
We'll reserve your spot today, and you can cancel up to two days* before your experience without making a payment. Secure your spot with ease, stay flexible, and never miss out.
How it works
Find your experience
Choose the experience you want knowing you can secure your spot without being locked in.
Make a reservation
Reserve now and pay later to secure your spot, commitment-free.
Choose when to pay
Come back to pay once your plans are set, or let auto-pay kick in two days* before your experience.
Enjoy your experience
Now you're all set! Have a great time.
Frequently Asked Questions  | Terms & Conditions
*Up to 9 days depending on the booking/product
Reserve Now & Pay Later
Secure your must-do activities without being locked in
Learn More

4
Oahu’s North Shore has a culture all its own and feels a world away from the bustle of Honolulu, so let a local guide show you the best of “the real Hawaii.” On this small-group tour aimed at photo enthusiasts, travel to around a dozen of the North Shore's most photogenic locations, from legendary surf spots to tropical farms and ancient mountain ranges. A professional photographer guide offers tips on taking the best photos and is happy to snap and share polished shots of your party.
...  More
From
US$119,95
From
US$119,95
Learn More

701
Circle the entire island of Oahu by coach, enjoying ocean views, rugged mountains, and fascinating history during this full-day tour. Check out Diamond Head, Hanauma Bay, Nu’uanu Pali, the Halona Blowhole and Oahu’s beautiful North Shore. Then soak up Hawaiian history and culture with a stop at the Dole Plantation (where you sample some fresh pineapple) and the serene, Japanese-style Byodo-In Temple. This Oahu circle island tour also includes entrance fees at the temple and round-trip hotel transport.
...  More
From
US$117,73
From
US$117,73
Learn More

41
See Hawaii's best and most beautiful attractions during this incredible tour that's designed with the photographer in mind. Spend 10 hours navigating breathtaking landscapes, Hawaiian sunrise, navigating the picturesque coast of Oahu and seeking out green sea turtles. This tour allows travelers to stop often and ensures visitors leave having captured the best images of this iconic island.
...  More
From
US$176,91
From
US$176,91
Learn More

2
Enjoy this amazing tour with a private company of loved ones and other photography enthusiasts alike, explore and capture every shade of Hawai'i starting off with a beautiful sunrise. No other tour will provide such an abundance of breathtaking sights in one day. Let us guide you through an amazing 11-hour circuit of Oahu covering all major sights and a few more hidden ones! Explore over 25 locations around the island, capture an eagles eye view of Makapu'u Beach, gaze upon lush green valleys from jaw dropping cliff's where ancient Hawaiian battles took place, and see magnificent sea turtles resting on the famous beaches of North Shore with daring surfers taking on monstrous waves. Along the journey explore and learn about Hawaiian culture and its rich and colorful history from our knowledgeable guides and become an expert at photographing Hawai'i.
...  More
From
US$159,95
From
US$159,95
Learn More

1
A Hawaiian photo shoot with a professional photographer takes the pressure off you to capture the best possible shots. After a session at some of the best local locations, you can relax during the rest of your vacation knowing you got those frame-worthy shots to take home. Your photographer will help you pose and find your angles at out-of-the-way photo locations that many travelers never find.
...  More
From
US$196,16
From
US$196,16
Learn More

Explore the beautiful island of Oahu with its pristine beaches, war memorials and amazing lookouts. On this 6-7 hour tour you will visit some of the most popular and most beautiful spots on Oahu. Some of the stops & Spots: Turtle Beach, Movie and Hawaii Five-0 Spots, World Famous North Shore Surf Breaks, War Memorials, Secluded Beaches, Hawaiian History, Breathtaking lookouts for Whale Watching (during season), Macadamia Nut Farm visit with Coffee & Nut tasting Taste Local Food, and experience ALOHA. Your day is filled with highlights, stories and ALOHA. This Oahu Circle Island Tour is based on our 5 STAR Rated "Highlights of Oahu Small Group Tour". Biggest Difference? This tour is done in a slightly bigger group of up to 14 guests, instead of just 7 guests. Want a smaller group or private tour? Check out our other Tours with Daniels Hawaii.
...  More
From
US$99,00
From
US$99,00
Learn More

23
On this Oahu helicopter tour, experience the thrill of touring the island just like 'Magnum P.I.' as you race across the Oahu sky in a replica chopper from the show. After lifting off from Turtle Bay Resort, soar high above the north shore beaches and head inland over mountains, where you’ll get the chance to view Sacred Falls and Pearl Harbor from the air. Above the waters of Waikiki, your pilot will buzz the city skyline like the opening sequence of the show, and no mustache or aloha shirt is required for seeing the famous view.
...  More
From
US$383,75
From
US$383,75
Learn More

This smaill group tour takes guests to experience the unique yet globally reknowned tastes of Hawaii while relaxing in an air-coditioned luxury vehicle with a friendly, local tour guide. Fun and filling, this one of a kind experience is truly a delight for all of your senses!
...  More
From
US$135,08
From
US$135,08
Learn More

OUR MOST POPULAR TOUR...This 8 HOUR CIRCLE ISLAND TOUR is designed to give visitors a full experience of Oahu. Oahu’s diverse landscapes are some of the most breathtaking in the island chain, with endless points of interest to explore. We'll explore all the sights and sounds of the South, East and North Shore of the island of Oahu.
...  More
From
US$185,92
From
US$185,92
Learn More

This 6 HOUR ROMANTIC HAWAII TOUR is great for honeymooners, anniversaries or when wanting to Pop the Question etc – We’ll greet you with Flower Lei’s and start our day exploring the most beautiful and romantic hidden gems of Oahu with a small Cooler of drinks and snacks like local cut fruit and macadamia nuts. On this Tour your guide will bring you to locations where just the two of you will be able to relax and be alone. Your Guide will also be your Professional photographer to capture all the special moments. Some of the more off the beaten path locations will be Kahala Beach, Spitting Caves, Halona Cove, Alan Davis Lagoon, Makai Pier, fish ponds, a waterfall Hike then we'll get lunch to go so we can bring it to our last stop at Secret Beach so the couple can be alone with amazing Beach and Mountain views.
...  More
From
US$212,96
From
US$212,96
Learn More

Things to do near Oahu