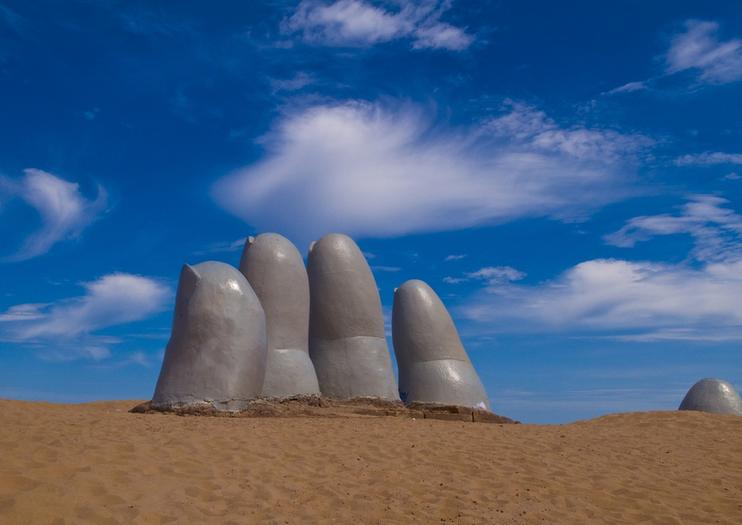 Brava Beach (Playa Brava) has golden sands and surf-worthy waves, but the star attraction is Mario Irarrázabal’s sculpture. Punta del Este’s best-known landmark, the gigantic Hand of Punta del Este (La Mano de Punta del Este)—or simply los Dedos, meaning “the fingers”—is meant to symbolise a drowning swimmer and warn of the beach’s notorious waves.
The Basics
Most Playa Brava visitors make a beeline for La Mano, which is found at Parada 4, and a photo stop at the sculpture is often included on city tours of Punta del Este. The beach itself is also a great spot for surfing and water sports, and there are a number of outlets where you can rent stand-up paddleboards or bodyboards.
Things to Know Before You Go
How to Get There
Brava Beach is located on the Atlantic Coast of Punta del Este, Uruguay, and can be reached on foot or by a short taxi ride from the town center. The Los Dedos sculpture is located at Parada 4, at the far western end of the beach, about a 5-minute walk from Punta del Este’s bus and ferry terminals. Buses run up and down the beachfront regularly.
When to Get There
The most popular time for swimming and water sports is during the summer months (mid-December to mid-March), when lifeguards patrol the beach. It’s no secret that sunset is an atmospheric time to visit, so for the rare, crowd-free photo, it’s best to make an early start and get there for sunrise.
Beaches of Punta del Este
Punta del Este’s second main beach, Playa Mansa, runs along the Rio de la Plata coast, offering gentle waves more suitable for swimming and activities including snorkeling and Jet Skiing in summer.  East of Playa Brava in La Barra is Bikini Beach, lined with beach bars and nightclubs and best known for its nightlife. Farther up the coast, the beach town of José Ignacio also has miles of sandy beaches with great surf.
Address: Punta del Este, Uruguay
Read MoreShow Less

Things to do near Punta del Este