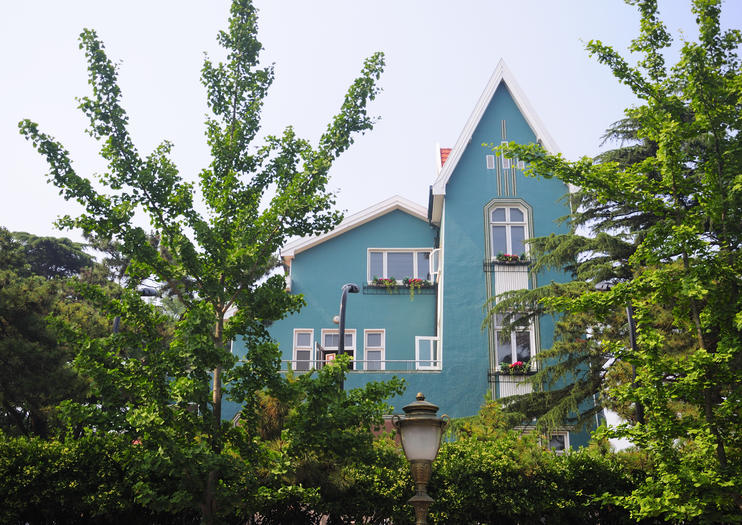 Stroll through Badaguan Scenic Area, and you might forget you're in China. This breathtaking neighborhood on the Qingdao coast has a colonial past, and is now home to the architectural styles of more than 20 countries, including Great Britain, France, Germany, Spain, and Denmark. The stunning effect of European mansions and villas peeking out from the neighborhood's verdant, waterfront land puts Badaguan at the top of the list for photographers, nature-lovers, and first-time visitors to Qingdao.
Tour the former German protectorate (1897-1914) on a day trip away from the city's busy Central Business District to experience the tranquility of Badaguan. Gardens and courtyards boast varied greenery and flowering plants, so there's always something blooming no matter the season. Don't miss No. 2 Bathing Beach, the stretch of sand that fronts the neighborhood, which was once a favored swimming spot of Chairman Mao.

Badaguan Scenic Area is accessible by public bus, alighting at Wushengguan Road Station. The neighborhood itself is free to explore, but you’ll have to pay a small fee to enter the Hua Shi Villa.
Did you know? The name ‘Badaguan’ translates to ‘eight passes,’ named after the eight avenues that originally passed through the neighborhood (now there are 10).
Address: Badaguan Scenic Area, Qingdao, Shangdong Province, China
Read MoreShow Less

2
Get to know Qingdao and its historical highlights in one day on this private city tour. Visit the pavilion-crowned Xiaoyushan Park for panoramic city views, and explore Qingdao Island and the Badaguan Scenic Reserve. Then, stroll along Zhanqiao pier and explore the old Zhejiang Road district. Lastly, tour the world-famous Tsingtao Brewery, where beer was made for Qingdao’s early-20th-century German population, and finish with a beer-tasting. Chinese lunch, entrance fees, and private transport included.
…More
From
US$223,52
Price varies by group size
From
US$223,52
Price varies by group size

Famed for its colonial architecture, its waterfront location, and its beer, Qingdao offers an array of cultural attractions—and this private, full-day tour provides a seamless way to discover them. Meet your guide at your centrally located hotel, and set off in the morning. You’ll visit Zhanqiao Pier, the Qingdao Guest House and more before pausing for lunch. In the afternoon, discover the Badaguan Scenic Area before touring the world-renowned Tsingtao Brewery, founded by German immigrants over a century ago.
…More
From
US$202,67
Price varies by group size
From
US$202,67
Price varies by group size

Explore Qingdao through its beautiful highlights & landmarks and discover hidden gems along the way. See the best the city has to offer with the help of a friendly local tour guide. You will visit Xiaoyushan Park, Badaguan Scenic Area, walking pass by Yinbinguan and St' Michaels Chatheral. Walk along the charm parks and paths which features European style. Move on to Zhanqiao Bridge which is the symbol of Qingdao, then end your day with the visit of the world-famous Tsingtao Brewery. Tour including English speaking tour guide, private vehicle, lunch and beer tasting.Tour start from your Qingdao City hotel or International Port.
…More
From
US$208,00
Price varies by group size
From
US$208,00
Price varies by group size

Have only a limited amount of time to discover Qingdao? This immersive, private tour introduces you to the city's top attractions, all in one day. Meet your guide in the morning at your local hotel, or International Port and head to Laoshan Scenic Area. Use the convenient cable car ride to the top of the mountain. Soak up famous sights like the Taiqing Palace and Longtan Waterfall. A friendly local guide accompanies you on way to share important facts about Taoism history and architecture along the way. After lunch ,choose the sites in the city you want to see. Tour including English speaking tour guide, private vehicle, entrance fee, cable car round trip, lunch and Beer. Tour start from your Qingdao City hotel or International Port.
…More
From
US$258,00
Price varies by group size
From
US$258,00
Price varies by group size

1
Get the most out of your stay in Qingdao with your local guide. You will discover Qingdao city by visiting its streets and architectures from the early 20th when it was the colonial city, you will taste the most authentic beer by visiting the Qingdao beer brewery. And you will explore the famous Taoist mountain Laoshan where Taichi originated. Try the best seafood and beer in China with the local experts from the door to door service. Unhurried and worry-free traveling experience with friendly local people.
…More
From
US$465,00
Price varies by group size
From
US$465,00
Price varies by group size

Things to do near Qingdao