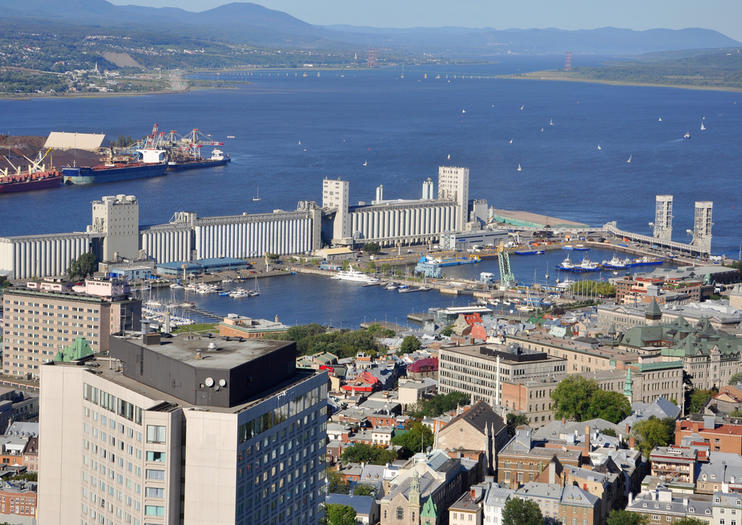 At the confluence of the St. Charles and St. Lawrence rivers, the bustling Port of Quebec (Port de Québec) offers access to one of Canada’s most well-known tourist destinations: the UNESCO World Heritage Site of Old Quebec (Vieux-Québec). Within the 400-year-old city’s walls are a host of historical attractions, such as Chateau Frontenac and Place Royale.
The Basics
The Port of Quebec (Port de Québec) is the gateway to Old Quebec, with many walking tours of both Upper Town (Haute-Ville) and Lower Town (Basse-Ville) departing from the port. Some shore excursions focus on the French-influenced culinary scene of Quebec City and go beyond the old town to hip neighborhoods, such as Saint-Jean-Baptiste or Saint-Roch, where participants can sample Quebec-made cheese and wine.
Half- and full-day shore excursions often venture to sights outside the city limits, such as Montmorency Falls, the Basilica of Sainte-Anne-de-Beaupré, and Orleans Island (lle d’Orléans), while short helicopter rides offer a bird’s-eye perspective on Quebec City’s historic fortifications and the mighty St. Lawrence River.
Things to Know Before You Go
How to Get to Quebec City from the Quebec City Cruise Port
Cruise ships visiting Quebec City dock at one of two locations: the Old Port (Vieux-Port) or Lower Town (Basse-Ville). Both are within walking distance of the historic core of the city. On busy days when several cruise ships are docking all at once, some vessels may dock a little further downriver. When this does happen, shuttle buses are usually available to drop passengers to the Old Port area.
Port Information
The cruise terminal has a tourist information kiosk, where visitors can find out more about Quebec City attractions and activities. Free Wi-Fi is also available at the port. While French is the official language, English is widely spoken in tourist-friendly Old Quebec.
Address: 84, Dalhousie Street, Quebec City, Quebec G1K 8M5, Canada
Read MoreShow Less

Things to do near Quebec City